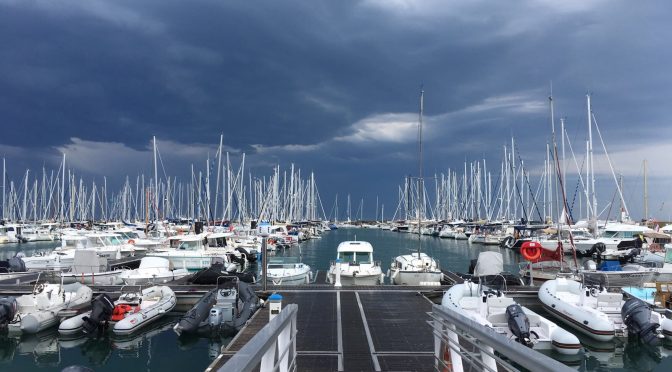 The wind and storms had arrived overnight, making for a very sticky night. Not pleasant. It meant that no one really moved very quickly, and we begun to wonder if the French boat would stay attached to us? They moved off late morning, when all the storms had cleared through.

Bessie always is unsettled when we pack, and does her best to ensure that she isn’t forgotten. Sits on bags, fusses, and generally paces about. She had to go for her vet’s appointment so that he could watch her eat a worming tablet and stamp her passport. We were charged this time, which is fair enough really.

It was only when we were packing up that Pete checked the ticket, that he had booked (for the avoidance of doubt). Our ferry crossing wasn’t for Wednesday, but Thursday!!!!! That was going to cost him an extra night in a swanky hotel, and me the hassle of rearranging a John Lewis delivery for Friday. We still don’t really know how he managed to do it, but it didn’t really matter. Thankfully.

One of the things that has amused us constantly over the two trips that we’ve made, is the attachment between Bessie and a 3 year-old basset hound, called Lanzarote. We thought she was called Lancelot (because of the heavy accent) and that’s what we call her, even though it’s not a girl’s name.

Bessie and Lancelot adore each other, and Bessie always tries to entice her into play, even though she’s not really allowed to. Bessie towers over her, but Lancelot’s paws are huge, and she biffs at Bessie. We have to walk past Lancelot’s boat every time we come to or leave the boat, so Bessie is always looking out for her, and sometimes Lancelot shook her lead to come and find Bessie.

Anyway. We left on time as we’d booked a hotel for our last night, getting us someway towards Le Havre and a chance to explore some of northern Brittany – and Normandy (so it turned out).