From the environs of La Rochelle, we drove north, edging into Muscadet country to meet Cathy and Simon for lunch in Clisson. We swapped car descriptions, and arranged to meet around 12:30, not realising how impractical that was. Clisson wasn’t a slip of a place, with a market square, but a thriving historic town, complete with a partly ruined castle, old stone bridge and Italian architecture. A stunning little town, that we didn’t really do justice. Doris (the SatNav) had plopped us the wrong side of the river, in the new town, when we wanted to be in the old town, so we abandoned her in favour of following road signs (how conventional), ending up in a car park at the back of the castle. Everywhere was ‘disc’ parking, so Pete went in search of where to buy one, and came back €4 lighter. We wandered around the scrub of land (hardly a park) around the castle, marvelling that we could indeed have been in a Tuscan town, before dropping down to the river, Bessie once again trying to throw herself onto the bridge to see/get to the water. Cathy then phoned to say that they were in town, but had no idea where they were. We darted up some steps, and waited near the Tourist Information Office, where they eventually found us, having scaled the same steps. Lunch was the only order of the day, our chosen place being a hotel’s terrace near the river. We spent a convivial couple of hours catching up on each other, and news of mutual friends, half an eye on the clock, so that we didn’t incur the wrath of the town’s towers. With Bastille Day approaching, Clisson was seemingly to go into lock down that day, and we had minor worries that our car would be the wrong side of any barriers. We needn’t have worried. We left Cathy and Simon having fixed for them to come sailing on Whinchat, a prospect that we all looked forward to. 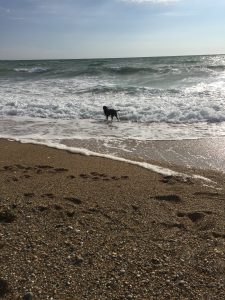 The journey north to Quiberon was terrible. We’d left Clisson about 15:00, into the early-leavers for their Public Holiday. Somehow we didn’t arrive back at the port until 20:00. OK we stopped at the supermarket to provision, and stopped for 30 minutes on Bessie’s beach, but the rest of it was due to extremely heavy traffic, with one particular stretch warranting a Doris-diversion (the most pleasant part of the drive). The ‘you have arrived’ beer on board was extremely welcomed.

We told Cathy and Simon not to rush, as we’d fallen into a pattern of not doing anything very quickly in the mornings, although not exactly being lazy either. We both love breakfast, and the routine of buying artisan bread at the bar has fallen to me (mostly) since Penny left. Another 1000 steps to add to the daily count is a bonus. Cathy and Simon were held up in horrendous Quiberon traffic, and arrived around noon, so we just about let them stash their bags below, then slipped the lines and set sail.

A glorious sailing day, with enough breeze to fill the sails, and lift Whinchat to a comfortable cruising motion and speed. At least, that was on the way to Houat. Simon helmed all the way, obviously thrilled to be given the chance. More swapping stories of friends, and reflections on what was moving around us. Our destination was the big bay, sheltered from the winds, but instead of being one of five boats this time the public holiday had brought everyone out… I estimated 70 boats. Pete selected the anchorage, and took the helm from Simon to park… deciding to moor in front of a rather striking gaff-rigged boat. Good job he did, we wondered if we were moving against it, but no… it was dragging its anchor and disappearing with the stiffening breeze. No one evidently on board. We watched a drama as a grey-hulled sailing boat, with a sizeable crew, went alongside it, and seemed to put someone on it to anchor again. They turned back to sea, but the boat then drifted again… and very sportingly, they headed back towards it.

Pete and I had to take Bessie ashore, so we missed some of the drama, instead bouncing on a rather under inflated dingy, with a very excited puppy. The combination of those two elements, and the said stiffening breeze meant that we were completely soaked. Cathy and Simon had made the much better choice of lying in the sun and drinking white wine!

The sail back to Port Hailguen was insane – hanging off the wind, blowing at the top end of a F4. Cathy asked me when we reefed, and I gave her a slightly puzzled response. “It depends”. On this tack, with the wind 20 knots over the deck, we had the main and yankee – not the stay, so technically reefed. At 25 knots, Pete put up the running back stay, but still Simon had control. Whinchat got a bit frisky towards the end, when Simon said he was hanging off the rudder, but Pete spilled some of the main, and it was again fine. Decks got washed, the dog had to be tethered, and persuaded to wedge… but all great fun. Mooring was soooo much easier with four on board, and Simon did the most gazelle like leap to get ashore. We were secured in record time. Engine used for about 45 minutes in total; oil leakage, yep, not ideal! Cathy and Simon stayed for a drink and then took to the roads back to Sainte Nazaire. I hope they thought the escapade worth it, we certainly loved seeing them, and what a way to spend Bastille Day.