A day of two completely contrasting passages to and from the anchorage. With Penny on board, the skipper has decided to give her a range of sailing days. Friday’s was going to be day-sailing out of Port Haliguen for an island anchorage, with a trip ashore in the dingy. The outbound was a straight motor, as there was barely a breath of wind. The becalmed conditions were mesmerising; glassy seas, the seam of sea and sky blurring in a blend of powder blues. So mesmerising that my helming wasn’t altogether straight, as I simply kept getting lost in the seascapes. It made me think of ‘calenture’, the word that has inspired a story in me. It refers to the delirium that sailors can experience, particularly in the tropics, in becalmed conditions where the low rolling sea appears like rolling hills… and they throw themselves in, some disappearing. It wasn’t my delirium, but I had a sense of how the sea might charm and fool, like a watery version of the sirens calling sailors to their doom.

The motoring meant that our speed was constant as well as our course, and we had the quickest passage to Houat, ever! We were on the anchorage for 11:30, opting for the western end of Houat, the lovely bay that we’d visited before. I wonder whether Bessie recognised it as a place that she’d been before. She was certainly pacing around the deck when we’d arrived. She proved Pete wrong on several occasions over a few hours. She will never jump off the boat. She will never try to swim to shore. She will never actually just leap from the boat. We reflected later that she was like a child, testing boundaries, verging on the edge of wrecklessness, with no idea of the consequences – would she be OK? Either achieve it, or be rescued. In each of her missives of the day, she had to be rescued, in a slight panic.

Bessie had been held by Penny whilst I cranked out the anchor chain, but released her. She was mithering around, and the next thing I hear is Penny’s cry that she’s jumped off the boat into the dingy – the dingy meaning going to shore. Then there was a splash, and the sight of her dayglo buoyancy aid, little black head bobbing, disappearing to the shore. I watched open-mouthed. Pete fetched the oars, and was about to go in the dingy after her. Bessie must’ve decided that it was too far, as she was frantically paddling back to the boat, at an impressive speed. Pete didn’t have to row away, as she came back, a little alarmed, and then couldn’t get back into the dingy without being lifted by the handle on the back of the buoyancy aid. It’s a good job that she likes wearing it; we think she could have swam without it, but it has proved invaluable in the space of a couple of hours at hauling her out. She then sat on the dingy, waiting for us to go ashore.

All she wants to do is play on a beach. To be fair, we all did! Pete took it in turns to row us, firstly Bessie and I, and then Penny to shore. The beach was gradually filling up with families, laden with picnic hampers, so we kept Bessie to one part of the beach, uncertain of which pull would be greater – a jambon baguette or a pebble. Always the pebble.

We left the beach and scrambled up through a sandy path to walk out along the headland, Bessie leaping about, desperately trying to find her own way back to the sea, not really interested in the  abandoned fort, half-decrepit, its rusty cannons peering over the battlements. We roamed around, seeking shade, before heading back to the beach, of course the wee Bessie leading the charge. 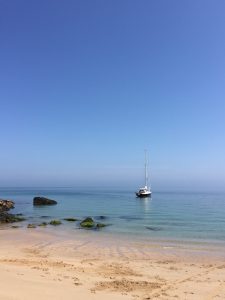 Penny said that she was going to swim back to the boat; I thought this sounded like a good idea. We both edged into the water, past a young French woman shivering. I’m not sure whether it was the sight of her, or the reality of the icy grip of the water easing its way up my body. I managed hip height, and thought about the inevitable gasp that my body would do… and what that might do to my psyche. I had an internal tussle, whether I would be strong enough to swim that distance anyway, let alone in cold water. Prudence won, and rather reluctantly, I decided to allow Pete to row me to the boat with Bessie. Penny beat us to shore, saying it was wonderful. A part of me regretted not being braver.

We had lunch on board, and then settled down to relaxation… only that wasn’t true of me, as Bessie didn’t conk out but prowled the deck, taunted by the cries of the gulls on the cliffs and in the water. Chase-us, chase-us, chase-us they seemed to goad her. She whined and grumbled. She won’t jump in, Pete said. She did. She swam around the boat, turbo powered, back to the dingy, where she dug at the water to clamber on board, failing. Panic flickered on her face, before Pete’s hand reached the buoyancy aid handle and hauled her back. We left shortly after then, tethering her very firmly to Whinchat, partly as she was not to be trusted to leap again, and partly as the wind had arrived, and it would be a beat back to port. Oh lovely sailing wind, how we missed you. Direction, not the most helpful, but lively enough to fill the three sails and power us along. I helmed for a while, but it was too chilly, so I was happy to be winch-wench and tack the boat and the dog.

The only additional faff in mooring was that when we were inside the harbour, Pete decided that we needed to be starboard-side to… so that meant a rapid-re-rig of the mooring lines and fenders. “I’m not quite ready,” I said to the skipper as I caught the pontoon approaching out of the corner of my eye. “I can’t stop now,” he replied. Thankfully there was a young lad there to take our lines, although he was trying to hold the bow against the wind with the bowline and the midships, now a forward spring… not using the cleat. Anyway, I was very grateful for his help, as it would have been rather untidy without it.

Penny declared it a perfect day. A good job for her sailing experience, as we haven’t untied Whinchat again. There is another ‘grand problem avec le moteur’, so we are port-bound until we decide what to do.