Another couple of days of not-sailing, adding to the rather low sailing-yield of this trip. A week away from home, and all provisioned out. Laundry and shopping were the order of Wednesday – and preparing the fatted cow for Penny’s (Pete’s sister) arrival.

One of those frustrating days, with not quite enough to do, meaning that time went elastic. The forecast was for thundery showers, and in my walk to put the laundry on, I wondered at the merits of choosing the day. (Photo above). In fact, just when I’d hung the washing over the rails, it started raining. Pete, on lookout, had spotted a market in the old port, so we headed over, just as it really did its best to get the washing back to ‘rinse’ condition. We carried on, arguing with Bessie that she couldn’t go to the beach. We managed to fill a shopping bag full of lovely fresh yumminesses… olives, filet of cod, cheese, speciality smoked pork filet, sausages and the sweetest melon.

Pete was in a funny old mood, and didn’t really know what he wanted to do. Sailing, obviously, but that’s not really possible with the rails loaded with drying washing. We ate lunch on board, and he went off to the supermarket the other side of Quiberon (not rated very highly for fresh stuff) whilst I took Bessie for a bit of beach time. I am certainly not the best stone-roller.

The sun had won out in the afternoon, so we lounged in the cockpit, supervising the boats coming in to moor up for the night. By then the wind had completely vanished, and so it was proper hot. Burny soles of feet on the teak deck hot, with the faint scent of singed wood in the air. Definitely not the day to be wearing a black fur coat.

The evening called for a couple of beers in the bar at the back of the marina, where we chatted to a two couples on their summer cruise out of Hamble. I’m not sure that it did much to ease Pete’s ‘mood’ (too strong a sentiment, but I can’t think of a tone-down word) hearing of where they’d been, reminding him that we were not-sailing, despite him telling everyone that Whinchat was a floating cottage for the summer. You can’t do everything, and Mr Toad is a worthy name that Pete’s sisters have for him. Because of his love of toys, and cars, not because he’s reckless. Of the latter, quite the opposite.

We promised each other that we would go sailing today, although through various iterations. Plan A was to head towards Port Louis, but I pointed out that if the plane was late, we would be on the wrong side for the ferry, and therefore that would get complicated for collecting Penny. Plan B was for a marina in Lorient, but I’m not sure why we went off that. Plan C was actually to have a giddy day sailing out from here, anchorage and back. It would mean that Pete had to rise earlier (as Bessie and I are usually up before 07:00), but manageable.

Unfortunately the weather gods had other ideas, with Port Haliguen shrouded in a damp, clinging mist, more cloud like in nature. There was little breeze, but what there was, pushed it through the forest of masts in pulses, making an eerie sight. Even the automatic lighting thought it was dark enough to illuminate. Mist. That was not in the plan. Pete was up early, and shook his head at the sight. A bloke a couple of boats down told me that it would clear at 10:00, “gone,”. It was more like 14:00, and by then we were on Plan D. We walked Bessie along the harbour wall to see what it was like out at sea. Murky, with no wind. Pete’s least favourite sailing conditions, so not a day to venture out in.

Plan D was walking the birthday girl on her best beach, and then a decent lunch. Plan D worked very well, as we had just about the last seats in Le Bateau Ivre (The Drunken Boat), just a wonderful little bistro. Funky decoration to make it charming, excellent service, and great food.

So, another reminder that you sailing comes with its challenges, its lows, but that you have to roll with it. Plenty of boats moved today, and the visibility was good enough (a mile or so), but without the wind, you have to say, what is the point? Tomorrow we are hoping for better. Our evening brightened in the form of Penny arriving, a true ray of sunshine, with stories of Pete’s sisters. A lovely evening with conversation that rambled, forming plans for the following day. Whinchat has surpassed Penny’s expectation, particularly when I produced a yoga mat… every store cupboard should have one! 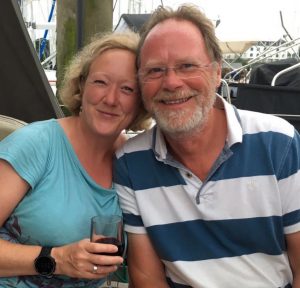