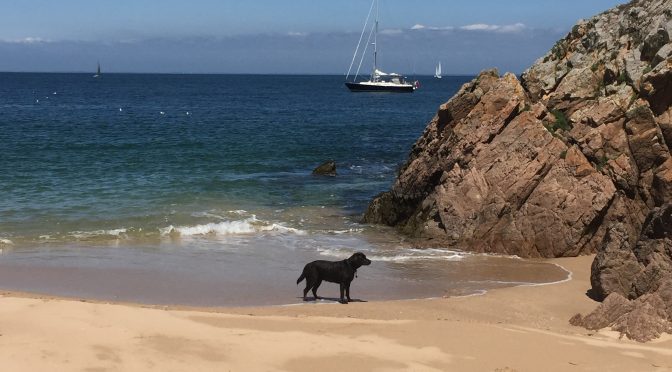 This was our last day of sailing on this trip, so we were determined to make the most of it. Beautiful conditions beckoned – blue skies, warm sunshine and a light breeze. We wanted to create the hat trick of the islands off the Quiberon Peninsula, but the breeze that was was a little too unhelpful. If it was a little stronger, yes, or in a different direction. But such is sailing! We were ghosting along at 2knots, which would have seen us arriving at the time we needed to up anchor for home (let alone the range of the dog’s bladder and bowels!), so yet another change of plan. I say that one of the delights of sailing is going with the wind, and so it is. By altering course for a southerly direction, we put the wind on the beam and our speed picked up. Houat it was then, this time the little bay that the flotilla had descended upon on our first day of sailing. It may have looked like beautiful conditions, but that wind was cool, cold even. Initially behind us, with the sails providing full shade from the sun, I was chilling right through. There was a strip of sun on the foredeck, so I took Bessie forwards, but the yankee sheets were slapping us. Not comfortable to me, slightly alarming for a Bessie, and the offset of the sun wasn’t enough. It was certainly a day for a black fur coat.

With the change of course, our anchorage was now an hour away, instead of several. There were three other boats in, and a group of SUP paddle boarders on the beach. By the time we’d faffed and had lunch, the SUPers had left, so once again we had an empty beach. Bessie knows the routines of launching from the dinghy now, and gets super-excited. She leans over the front tube, tail wagging. I had a hand on her, but Pete wanted me to let go to see at what point she’d leap off. With about a metre to go, she climbed onto the tubes and sort of fell in, disappearing under the surface, bounced up by her buoyancy aid. She rolled in with the waves, and scampered about… and then stood as if to say ‘c’mon, don’t dally’. Only we had to haul the dinghy up the beach, as it was a rising tide. We had again found a beach with hardly any pebbles on it. Those that were Bessie rapidly lost, as the sand was so soft that when the sea washed over them, it sucked them under. Bessie grew impatient as we scoured the beach for any stones. Pete took her off the beach for her toileting, but she hardly got a paw off the beach. She came bounding back without him – he’d gone to see what was up on cliff. An old fort, it turns out.

We were thinking about luring Bessie back to the dinghy and to Whinchat, when we saw a customs boat approaching the little bay. It made for Whinchat, circling her. We waved from the beach, but I’m not sure if they registered us or not. We decided to head back anyway, dragging the dog into the dinghy, but the customs boat didn’t wait. We both had the same memory of being boarded on Belle Isle some five years earlier.

The sail back to port was outstanding. Not in the shade, so warmer, was a big plus. I helmed the first few miles, and was amazed to see this would only be about 30 minutes! Swift sailing, just off the wind, with smooth seas. Gorgeous. At the light house, a small course change, but it meant that we would need to make one tack. Bessie, by now, seems to have learned that when Whinchat is tipping up, she needs to wedge in the companionway and lie down. She did get up for a lookout, I wonder whether she could smell land, so she wanted to see if there was any chance of visiting a beach. Her paws are too slippy on the decks so once again, she used me to brace herself against so that she could take watch.

Our arrival into port was excellent, a little less wind eases the drama, and I’d rigged the bowline so that I could leap ashore with midships, and reach for the bow. A chap from the next boat came to help, and kept trying to insist that Pete needed to drive forwards. “He knows what he’s doing,” I said. I watched his realisation as he worked out that Pete was then going to drive astern on the rear spring… Clever, he said. Enough said.

The tasks of the evening were to prepare us for an early departure – boat cleaning and packing up. The latter always makes Bessie anxious, as we think she’s worried about being left behind, so that made for a restless puppy that evening, probably compounded by us going to the little bistro in the port. A lovely supper, overlooking the boats in the marina, just talking about the trip and what’s coming next at home. Being away is great fun, but home is pretty special too.