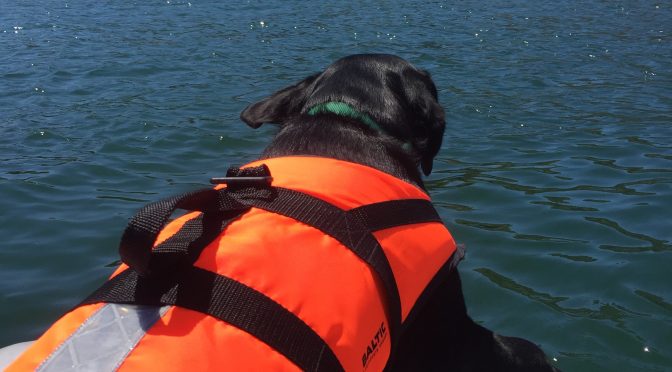 Let’s not beat about the bush. Pete would rather Bessie wasn’t on board at all. He finds her restrictive, because we can’t make passage with her unless there is a pit stop in the middle of the day. We can’t anchor overnight, as Pete would be the one to row her ashore for the night time pit stop. Both of those we may be able to solve with an astroturf solution, which is the task to investigate before the next trip.

As boat dogs go, Bessie hasn’t made a fuss, but she doesn’t anyway. She has coped with all points of sail, and her least favourite thing seems to be the boom, or the block that flings around on the traveller. That’s pretty understandable. When she first came out with us, she was a bit alarmed at the sound of flapping sails. That is now normal. She is getting more in the habit of lying down to go to sleep – both at home and now on board.

She’s tried to chew at a couple of the lines, but that’s attention seeking behaviour – or rather, her favourite kibble-extracting device. The command of ‘leave’ gets reward. That is no different at home.

She is probably more clingy than at home, but the environment is different. I think the thought of being left on board is an unhappy one. That said, she can’t get up or down the companionway steps. She has to be carried, and at 23kg, that’s quite a load. Mostly it is me that is favoured to do it, as I am the favoured one. She cries when I leave the boat to have a shower. She doesn’t with Pete. A French couple with a basset hound (Bessie’s French bff) use a sling to carry their pooch up and down. Bessie is happy to put her paws out, and has modified it to go on one shoulder, so that she can be tipped up or placed down. She knows what is more comfortable.

The upside of having our Bessie with us. She is a delight (and a scamp), and part of our family. She makes us go for walks when we might now. Her abject pleasure in playing in the water, or chasing stones is a mood-lifter. When she hasn’t seen you for all of five minutes and snuffles and wags her whole back end in her thrill at seeing you is also mood-enhancing.

Her disobedience is a challenge – not in the boat, but around the shore. I keep on telling her that some labradors will never have seen the sea. It doesn’t seem to elicit any proper behaviour. Her pulling on the lead is hard work, and annoying. She does seem to be jumping up less.

Bessie would not do anything other than sleep on my bunk, with me on the first night, and that has been the pattern. She is on the bunk before I’ve got in. Sleeping apart from Pete sucks, but in a small unfamiliar space, it’s a battle we have yet to fight. We will try it on the next visit.

Bessie is more akin to my kind of sailing than Pete’s, for sure, but we have both been impressed with her.