You know there is a lot of wind, when for the first time kitesurfers were flying in the bay. A brisk easterly, with quite a choppy sea when Pete took Bessie along the sea wall. We decided that it would be extreme heeling, and probably not conducive for one with poor deck traction, and still learning the ropes. Plan B would be Vannes, an hour’s drive away, given the slow road off the peninsula – the French love their motorhomes, moving like white snails, causing the impatient among the locals to overtake in gaps that don’t look possible.

I think the skipper had hopes of getting to Vannes by boat. It may be too long a passage for the sea-dog, but we might try some ‘astroturf’ training before we next come out to correct that. There is a festival in Vannes this week, so Pete wanted to see how the town was preparing for it..

Lunch was the first stop, a hotel’s terrace, in the warm sun. Two courses – mine a crab/celariac combination followed by a Gros Salade. Pete went for tomato/mozeralla and steak tartare. He seems to be over the fact that he was pollaxed by one last summer. Bessie the land-dog was very well behaved over lunch, lying goodly under the table. She used up most of her goodness in that hour and a half, because she was testy for the next couple. Her love of water is almost more than a food driver, so she was pulling to get into the river where the boats are moored. Really annoying, and completely understandable. She didn’t win that one, but the constant straining on her collar, and the heat in the city meant that she was parched. Without a map we were truly wandering through the sleepy Sunday streets, knowing that it was walled (medieval) but unable to find it. And then as happens, we turned down a small street, and found it. Well, actually we found the water, with access steps, so Bessie was allowed down, and drank deeply. 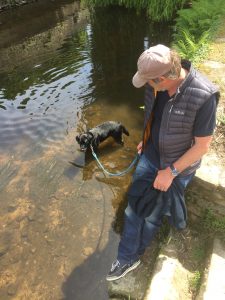 Of course she then didn’t want to come back out. The wide green space surrounding the wall, with pristine lawns and beds peppered with purple flowers had people ambling. The sight of Bessie, tail wagging lazily, knee deep in water, caused most to raise a smile, an acknowledgement of her simple pleasure. Pleasure that would be a challenge to convert to going back in the town, but a trail of kibble eventually lead her out. She didn’t understand that we would stop at the long beach and roll stones for her, again. She doesn’t know her limit on this, so we were more cautious with the roll-rate, but somehow we’d all done 16,000 steps that day. No wonder we were all shattered!

The priority for the day was to find a vet who would certify Bessie’s passport. There are strict stipulations for her return. She has to have tapeworm treatment (orally) between 24 and 120 hours before returning to the UK. This has to be signed off by a vet, in her passport. We had no idea how easy it would be to make this happen – very easy, as it happens. We had to wait about 30 minutes to see the vet, and he gave her the tablet, swallowed readily by Bessie (true to type!), signed where he should, and sent us on our way without charge. This freed us up to make plans for our departure.. and the rest of the day, as we’d half expected to have to return for an appointment. In the end we decided to hang out on board, taking in a little bit of sun and then a lot of shade, reading and watching life in the marina pass us by.

We took Bessie out for a walk further along the coastline, driving to a headland, where we completed a circular walk. Once again, she loved being on the beach, chasing stones and standing in the waves. Of course she didn’t want to move from one beach to the next, uncertain as to whether her game would stop. Pete appeased her by rolling stones along the gritty coastal path, until she scarpered off down the rocks… On this retrieval, she was back on the lead, the rules when disobedience prevails. She hated it, tugging and pulling, half-choking herself. It was slow progress back to the car, in full training mode, edeging her back in to better behaviour. She drank a whole cannister of water, and collapsed in the back of the car. Proof that enough was enough for our never-enough labrador.

Tomorrow we will go sailing. Last chance for a month