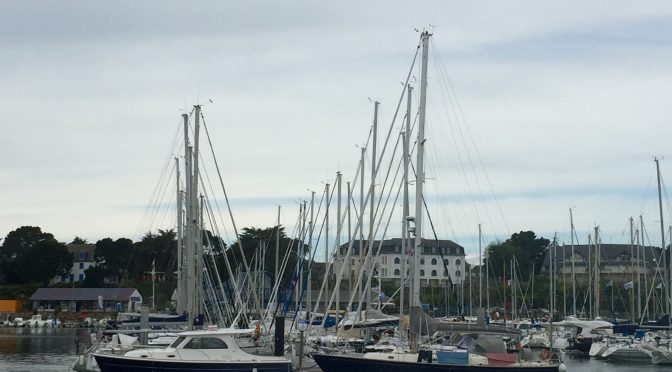 The failure of the fan has meant a couple of days in port. Wednesday was one of those days when you really didn’t want to untie a line unless you had to. Rain of monsoon proportions, resulting in appalling visibility. If there had been a log burner on Whinchat, we would have lit it. As it was, there was a dog to walk. We had the cunning plan to walk to the beach close to the old port, and make her run up and down for half an hour. Who knew that most of the beaches have dog bans? We walked further along the coast path, passing sandy beach after sandy beach, all with stern warnings against Le Fido. Bessie understanding none of it, pulling hard to get down to the water. Eventually we came across a beach that had a rough path down to it, without the fierce warnings. There was no fool out other than we anyway, so I’m not sure who would have complained. Bessie went nuts, hurtling towards the sea, bounding in the shallows. We ambled down the path, as she stood, a stance, as if to say, ‘well come on, I haven’t got all day,’. All day, it turns out, she probably could have, as we stood, rolling stones, and she leapt around, no wetter for being in the sea. We, meanwhile, with a lack of motion, felt the water penetrate through to the lowest layer of clothing. Pete’s Rustler jacket threw up its arms in protest; his only long trousers, jeans, not known for their suitability to wet weather. I’d waterproofed my ancient merrels before I left home, but water poured through the laces. My wicking walking trousers clung. Utterly miserable. We’d had enough after 15 minutes, but the little scamp hadn’t. Pete lured her back, but trusted her too much on the recall to sit and wait. After taking the treat, she legged it back to the sea. Same stance. We shrugged and walked off, she held her ground. We disappeared out of sight. Still she didn’t come. I wonder how long she would have held out, but I called her, and she came hurtling up the beach. Probably about the edge of comfort limits for both of us. Wet dog. Wet Mistress. Sodden Master. Straight back to the boat to put on the boat heating and wish that the weather would pass through. An absolute reminder how damp boats can feel. Still, the upshot of the rain is that Bessie’s fur is soft and silken – no longer crusty, salty sea-dog.

We had a switch around of bunks on Wednesday night, Bessie leaping into mine before I’d tried to shuffle in. The wind had built, blowing across the stern, so that the short fetch of water slapped constantly, and with voice, throughout the night. Somehow I managed to convince my mind it was lapping water on the beach. That didn’t work for the dog who decided I needed a wash at 02:30 (she washes during the night), and then wanted the duvet rearranged (trying to nest with it), a tug of war I hardly ever have with Pete! At 05:30 she was restless again, but I managed to clamp my eyes shut as she stood over me. 07:00 she was pawing to go outside. Fair enough. Hello Thursday.

Pete went up to the chandler and established that the fan should be here later. Would that be a Cornish later? Do the Breton’s have DRECKLY? I would begin to wonder. The morning was spent in the service of tasks. Pete finding the excellent bread and provisioning for several meals. After Bessie’s incessant pulling on the lead, I was taking her back to training school. A 30 minute (not very far) walk along the sea wall, constantly stopping, circling her back, sitting, off again.. for a few steps. Then repeat. By the return along the sea wall she was good, really good given her ‘jeunesse’. Where there is a strip of water, or a sandy beach, it will always be work-in-progress. I realised later today that it’s one thing to ask her to stop doing something, but you have to give her what you want as the alternative. She responds well to that. Always rules.

Anyway. One of the things that Pete said yesterday that made me a bit sad, in the vein of “the damn dog”, was that ordinarily on a damp day, we would have had a long lunch somewhere. That hadn’t occurred to me as a restriction, and I’m always one to try anything. Today we went to Portivy, enroute to the long beach, for lunch., finding a fantastic pub, Le Bateau Ivre. We did exactly what we would always have done, and Bessie behaved impeccably. At least in the pub! She pulled like mad when she saw that we were near a port, a bay and water. I hadn’t had my realisation by then, so she just wound me up, and she got narky as she was choking on her collar. Once inside the pub, she knew the rules (apart from trying to snaffle a fallen frite) and was really good. Kibble-managed, but good.

From the pub to the beach. The one that dogs are allowed on. It’s on the Cote Sauvage (wild) so the sea was rolling and roaring in, so she had no desire to get wet, but the rules of the game were clear. I had red squeaky ball. No, that is for the garden. On the beach you must roll pebbles. And so Pete did, for about 25 minutes. We nearly broke the dog. I don’t think she’s ever run so hard, and it took about the same time for her heart-rate and breathing to subside. We will have to manage her. She certainly had no diva moment leaving the beach, and walked perfectly to heel. We thought she would collapse back at the boat, but after a short cat-nap, has been content to be on deck. Five hours since we returned, her on the leash, but pottering about the cockpit, occasionally chewing things she shouldn’t, often looking out and about, sometimes sunning herself. Oh my. It’s a dog’s life. I keep telling her that many a labrador never sees the sea!

Anyway, at the risk of this turning into a Bessie-the-sea-dog feature, the chandlers was closed when we returned. And closed each time we checked. At 17:30 Pete went for ‘one last check’, to find him open and shrugging to say ‘what took you so long?’. Anyway, we thought we would be another day in port, which would have grown tedious. As it is, the fan is in, the panel is back in the aft lazarette… but tests to see if it works have not gone well. It is blowy today, which might mean that the engine isn’t hot enough for the fan to kick it, or Pete’s wiring has gone wonky. We have decided to see tomorrow. Yes, we will untie Whinchat and give her a different workout tomorrow. Hopefully not beating everywhere. A little more wind is forecast tomorrow, which will test the saltiness and competence of our very-at-home boat-dog.