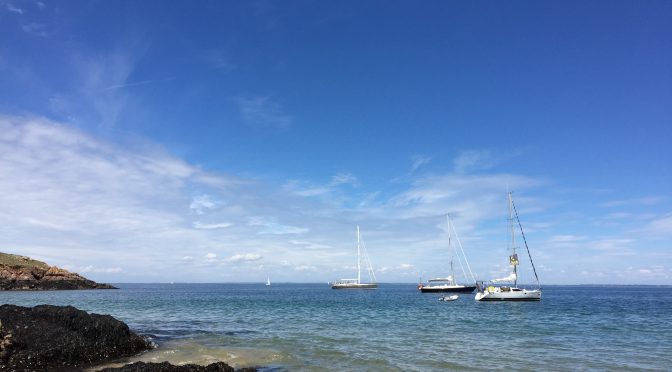 We decided our first day with Bessie should be a relatively short day, a nice sail out to an anchorage, launch the dinghy, launch Bessie and then drift back to port. Some days things go to plan. Some days, nothing happens very quickly. Some days both of those things happen. However, before you can have a lazy day’s sailing, you must make sure you have bread for a lazy day lunch on board, so I sent Pete off to buy some fresh rye bread from Le Boulangerie in Quiberon – it is exceptional . ASIDE: not enough superlatives for this; even Pete favoured it over his much-loved artisan baguette. Thick crust, almost burnt, giving a deep crunch on the bite, and then the softest, richest, earthy dough underneath. Bread-heaven…  Being in France is obviously also about the food and the wine, but we are here primarily to make friends with our Whinchat.

We cast off around 10:30, Pete somehow working the lines (why do the French not love a cleat? This silly, tie your lines through things, no wonder they all approach with a boat-hook!), and me at the wheel! I don’t do the driving! Gentle astern, to avoid mounting the motorboat moored in front of us, and then bow-thruster, a powerful vroooom, and the bow edges to port, and now gently ahead… I’ve driven Whinchat out of a berth for, well, I can’t really remember the last time! Is this a boating first?

Here endeth the moment by moment blow of the sailing antics. There wasn’t much wind forecast, and guess what, the wind that waited for us was on the nose! Long, languid tacks, the high cirro-stratus peeling back to frame us under blue skies. Bessie was unleashed not long after we left port, me on the helm. Pete is braver than I am at trusting her, and as she grew more confident, she wandered forwards, peering over the side. Both of us know that she hasn’t learnt the unpredictability of boat movement (that’s why I wasn’t allowed sailing for a good chunk of the summer last year, healing internal muscles), so with Whinchat heeling, the indignity of the orange jacket faced her. To be fair to her, she didn’t protest, and I wonder if it meant her not being called back, or tethered, it was a good compromise. She sat on the deck, watching the world go by. At some point, she fell asleep, under a shade that we’d created using a seat cushion. As Pete said, it’s not the day for a black fur coat.

Our, 8nm trip took four hours. Not exactly terrific in terms of distance gained, but a lovely, lovely gentle sail. Nothing but endless blue skies, hot sun and a lazy sea. A number of sails peppered the horizon, hardly surprising on such a balmy day, but we soon realised that this was a flotilla, if not an armada, destined for the same shore on Ile d’Houat. In this off-season sailing, would we really share a secluded bay with 12 other yachts? Fortunately they opted for the next one along, our plans having shifted once. It may have been 8NM direct, but we were almost going via La Rochelle… Pete’s original idyll was a long bay on the ‘far’ side of the island, but time was against us, only because there is a puppy who has now woken, is chewing lines, and you have to assume needs to pee!

Bessie isn’t yet used to the roles needed in mooring – whether that is alongside, or anchoring. The mistress on the foredeck to anchor was of grave concern. She was tethered behind the helm with the master, not certain what I was up to. Preparing the anchor… 20m, the master, the captain, signalled for me to drop, but most of the cable ties have been eroded, so there is little but counting the drop of chain going past. It always strikes me as part science, part art. Pete’s sharp move astern secured the anchor into the seabed. A very quick manoeuvre on lunch, not exactly the planned for lazy…  whilst Pete inflated the dinghy. A new adventure for a Bessie. More indignity with being lowered from Whinchat’s deck to the launch via her dayglow boat wear, but she did a fine “Titanic” over to the beach, front paws on the tubes. I undid the clips of her floatation device as we came into the shallows, her tail wagging, I released her leash. She jumped onto the shore, shoulder deep in water. Just about her favourite place, anywhere. Water.

We lost an hour, somehow, on our deserted beach. I thought at first we would be driven off by determined gulls nesting in the cliffs. The frontline having launched to see us off. They soared and swooped, and I (the great bird-phobe) would have swam back to Whinchat, but somehow the combination of man throwing stones for dog, and dog only interested in stones made for a truce. They settled back down, perhaps slightly disappointed not to have engaged in battle. We had gone ashore to ‘toilet’ our puppy, but she would not get out of the sea. The sea is higher in the order in a Bessie-world than treats, although she automatically salivates to a cry of “wasss-is”. Pavlov’s dog and all that. We really do have a water-dog. Pete lured her up the beach towards a ravine, biscuit glued to her nose. When her paws hit the grass – success. We knew then that we’d make it back to port, without incident… But only after we could play some more. It was a job to get her back into the dinghy (hoisted, again), and then on board, where she collapsed, in a soggy, happy state.

The wind had died, and shifted. Facing a longer beat back, Pete deployed the engine for a straight 8NM homewards. The engine is never a quiet option, but then the fan kicked in, with a noise I can only imagine to be like a Dementor sucking your soul. No deadly undoing, but a failing bearing on the fan. Pete told me that most boats don’t have them, and I wished for a spanner to throw into it. A rattling, noisy passage back, with us both resolving that is priority for Wednesday (as it is, heavy rain is forecast, good for boat jobs, and our pink English skin). Thank God it had ceased by the time we approached port (we had slowed in order to make the fan work less, and Pete altered the kick-in temperature); that would have been too much.

We moored alongside perfectly, Bessie secured, and not too much whining as we both leapt about doing the jobs of mooring… always involving much line tying, untying, tightening, loosening…. Until you just think it’s time for a beer. And so it was.