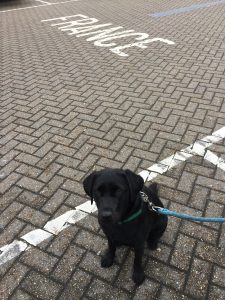 A lot has changed in the last couple of years. Whinchat had her blue water muscles stretched in 2015 when she entered the AZAB. In 2016 we were thinking “Baltic”, but then I went and suffered a spectacular injury (a mechanical one), a collapsed lung, which meant that Whinchat was largely tied up in Mylor. I was on big pain killers and a loss of ‘life’ mojo (let alone a sailing one), but it broke my husband’s heart to see Whinchat swinging on her mooring, growing way too much weed (the voodoo solution having not worked properly all season). In 2017 it would be different, we said.

And then we got a puppy. Something I’d long wanted, and life had a “it’s too short” feel about it. Pete’s parents both died earlier this year, and so we’ve arrived, a little shell-shocked. We are here. We have a lovely boat (still gives me the thrills), in a glorious location, and we have a 10-month-old puppy.

Pete sailed Whinchat out here with Adrian Jones, a great friend (of Rustler fame). It was good in places, and by all accounts, part of it that I wouldn’t enjoy. That’ll be the lumpy seas without sea-legs.

Bessie, the little black scampy, and I were always going to meet Whinchat here. Cornwall to Brittany – a breeze! Until you realise that the dog has to stay in the car during the crossing. Hell, that’s barbaric. I don’t even leave her to go shopping. That realisation (the summer would see us hopping back and forth all the time) saw the 6 hour journey across southern England, and then the 6 hour journey across northern France as the way forwards. Great!

So, that was that. Already doing crazy things to allow the little black bundle to join in the fun. She’s been out a couple of times with us, and seemed to love it. We think that has a lot to do with where the boss is, she’s happy (that is me, to be clear).

Today has been our first day in Quiberon (where we have a berth for the summer). We have provisioned, done laundry. Eaten gallette and drank cider…. walked for 12,500 steps. Tried to persuade our labrador out of the sea. Tried to stop her eating mussel shells…

Bessie limitations of Day 1. She can’t manage the companionway stairs. At 23kg, that’s something to shift up and down. When she was small (like less than 10kg), she couldn’t get in the car, so she would put her front paws on me, and I would lift her in. That is the same movement up and down the four, steep steps of the companionway. Her paws on my shoulder, her body flat against mine, my arms scooped under her bum… Princess Bessie up and down the steps! God only knows what getting her in and out of the dinghy will be like, but that’s tomorrow’s task.

The other limitation is that she is so wedded to me (Pete has been away an awful lot with the slow demise of his folks, that I am the constant, the safe base), that come bedtime last night. Yep. Took the biscuits to go to her bed, and then, as soon as I’d climbed into the forepeak, she took a running jump to settle at my feet. SHE DOESN’T HAVE THAT LUXURY AT HOME. Mr H in the servant’s quarters.

Labrador face wash as a wake up call. Endearing on Day One.

One thought on “Have dog, will travel… (not on Whinchat)”