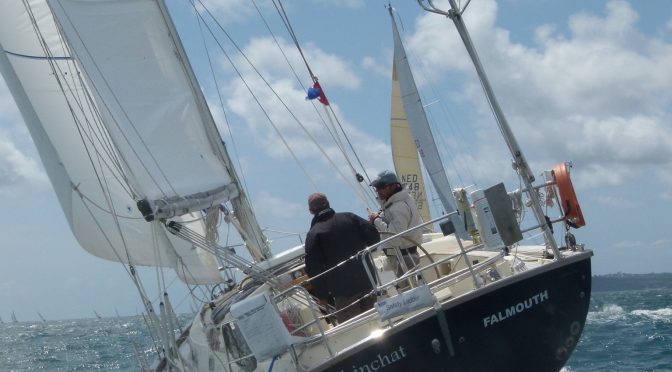 Last Summer was a strange one for us as a cruising couple – we barely did anything together! Whinchat and Pete spent a long time together, as they raced in the AZAB. I tried to get Pete to write something, but on the way out, it was full on and insane sailing – and on the return, it was the opposite. Too frustrating at times.

We exchanged many messages via the sat phone, and I did think of putting together something of a transcript, but decided that wouldn’t make very exciting reading.

However, there is a kind of record. Pete’s crew, Simon Carter, had a GoPro and put together this short video…

The very cool thing about the race was that Pete and Simon were thrilled to discover that they’d won the outbound leg for their class. Those lively conditions favoured our Whinchat! The return, being a whole other affair, saw Whinchat slip down the field. However, Aliana (another younger sister to Whinchat) won the overall class. Aliana’s skipper did better at finding the wind, and didn’t break their spinnaker.

In other adventures, Pete also crewed on a sister of Whinchat, a Rustler 42 Margansie, on her Atlantic crossing. It was a season for Pete that saw many miles at sea. With me having no great desire for blue water sailing, I was happy to see him pursue some dreams. Being a sailing-widow wasn’t always easy, or fun, but it was my choice not to go on both trips.

We did have a few days on Whinchat together, dodging the best of the British weather. I don’t know why I didn’t blog about that – perhaps it seemed so insignificant given everything that Whinchat had achieved! Rather sadly, it’s a gap in her history recorded here. Must do better – not sure that will be this year. That can be a whole other story.