No wind, glassy seas (but that’s fine for a short journey).

It turns out Ensenada de Barra is a nudist beach. It was only when we got to the beach this morning, after about a mile of rowing, that I quite realised what I felt about it. No problem in concept; none whatsoever. We landed the dinghy, got out, and then I had a massive attack of self-consciousness (only I got my words wrong and said to Pete that I felt ‘unconscious’… LOL!!!). I felt totally overdressed (in a bikini top and shorts), but didn’t want to de-clothe any more (sunburn!). So I froze. Pete was less bothered, so we basically walked about ten paces, and then went to launch the dinghy back in the water…. just as a swell crashed in, making me jump about, so that a man only wearing a hat, launched us. He wasn’t bothered. So why was I? Much to Pete’s frustration, I think. Of course when we were rowing the mile back to Whinchat, he kept on pointing out people with clothes. Perhaps I could have been a bit less, British, but hey…

Back on Whinchat, we pretty much upped anchor and left, with the same shenanigans with the Rochna anchor having pirouetted so that stowing it took a couple of attempts. We’d read that this bay could be ‘weedy’, but there was no sea-weed to slash on the way up.

We motored the short journey back to Cangas (I just said Kansas in my mind, nothing of a tornado here, so not sure what that’s about), passing several yachts heading out. For a change, and perhaps indicating a move to summer (if it can’t be passed as summer in 30+ degrees of heat, I’m not sure what will be), most boats were Spanish. If they’re anything like the pattern of things we’ve observed over the past few days, they come out for the day and then head back in the evening. Anyway, when we were approaching Cangas, we saw a German boat that we’d seen in Camarinas and in Portosin (they were the ones waiting for repairs). We waved like old friends as they disappeared from view. I’m not sure we will see them again, as they’re heading well south. I don’t know their names, nor could I tell you anything about their boat (including its name).

Our arrival in Cangas was a little eventful. I went down below to radio on VHF, firstly getting the name of the marina wrong (so no response), then I had a ‘conversation’ with the Marineros… No “Si” this time, but in a mix of Spanish (his) and English (mine), we went through a whole load of things. Pete was asking me to come up and tie fenders etc, for berthing, so I abandoned the radio… and then a question came up “is your boat blue?”… Back down below to the VHF, “Si, azul.” He’d seen us, and was to take our lines in exactly the same berth that we’d vacated before the islands. He was a young guy, trying to be very helpful. I passed him the bow, but he tied this as a spring, so that didn’t much help. My next move was to take the mid-ships to make a backward spring, but there was no sense on two springs, so I lassoed the stern, so we at least had two lines on. Not much wind, so all good. We then corrected the bow line, added another starboard bow line, secured the backward spring, and then Pete added the long line as a forward spring. No amount of wind is going to shift us – not that we’re expecting any!

It’s red hot today, and after the rowing, and the docking procedures, but there was laundry to sort! I went up to the young Marineros, and got the key for the laundry… only the dryer is broken. “No problemo”, says I, pointing to the sky, “el sol.” He laughed, and told me that the washing would be half-price as the dryer was “kaput”. All very good. He watched me set an alarm for an hour and a half (these madly long Spanish washing cycles, not very green). In the meantime Pete and I went back to the little cafe for lunch, where we downed two very cold beers (in iced glasses = genius) and caught up with the rest of the world (i.e. WiFi). There was no Menu Dia (I couldn’t understand why not, but I nodded anyway), but we could have a selection from the menu. We had a super lunch. A crisp salad, the best tortilla ever (even from the look of it I knew it was going to be good, as the photo shows), calamares and then roast pork! We thought we’d ordered some ‘jamon’, and we had, but not what we were expecting. In the midst of eating, the alarm for the laundry went, but I stalled on that one until coffee was done (on the house, when Pete paid, as a treat… how cool is that? The waiter recognised us from a few days back). 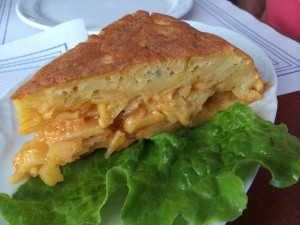 Here begins another saga. The young Marineros (trying to accommodate for my non-Spanish speaking) has been replaced by Grumpy Marineros (who seems to have no patience, I assume because I can’t speak to him). He just speaks Spanish, which is fine, but doesn’t do hand signals, and it flusters me. I get the laundry, and can express enough words to say that I have more laundry. He shrugs. I go and get it, but I need him to let me through the door to the pontoon (the office is closed, so we can’t have a key, they must be locked away). He doesn’t initially understand my action of turning a key, and saying “porta”. He waves me to the gate, telling me he will watch me (I think this is what he’s said). I go to the gate, rattle the door, and he comes up to me, sighing muchly, and says something. I have no idea what. Then he says “cinque euro”. I think that’s going to get me a pass. So I point at the cafe, and say “me marido” (husband) and he nods, so I dash into the cafe, full of excitement, as I think I’ve negotiated a key, but no, it’s the fee for the laundry! I go back with the five euro (which I’ve had to change a 20 for in the cafe), and he spits something at me (so it feels). A guy standing next to him says, “he says, come back in one hour for the laundry.” I mutter some thank yous and go back to the boat to hang out the first load. Because it is SO hot, it dries within an hour, so the dryer was totally unnecessary.

Pete comes back from lunch, and we both have the ipad edition of The Saturday Times (my favourite), so we squeeze into the shade on Whinchat’s deck and devour the paper. A breeze mounts, and it feels heavenly. We have to recover another load of washing, and also provision. It is too hot for the latter. I successfully recover the laundry after the hour, and take the cheat’s way out of getting back through the gate by ringing Pete three times on his mobile to come and open it (just a handle from the inside).

The rest of the afternoon slips by, and just as we’re about to go out shopping, about 18:30, a whole series of amusing events take place. The second wave of boats from the islands comes in, at a complete rate of knots, blaring “Gangnam Style” through its loud speakers. On the top deck, it is jumping with people working the moves. Unbelievable! It happened on the next boat that came in, shaking Whinchat in her mooring. Then, within about 3 minutes of each other, both boats on either side of us come back from a day out at anchor. The first, a Bavaria 39, a couple on board, is coming in the same berth (we are port-side, they are starboard-side). Their mooring lines are on the dock, attached to the cleats. Pepe (the Grumpy Marineros), is there to assist, but at THE critical moment, he wanders off, leaving Mrs Bavaria (Spanish), yelling for Pepe, looking at her husband, who is slowing down, but there’s a cross wind (taking them on us). She can see the bow drifting, so she’s waving her arms at husband to steer up, yelling for Pepe, and not able to do anything, because their lines are on the pontoon. Pete gets up, and fends off, as Pepe saunters back and hands some lines. Pete said that Mrs Bavaria was none too impressed with husband or the Marineros. I’d change my mooring technique.

But no! The same thing happens with the tired old motor boat the other side of the finger pontoon. He comes in, mooring lines again on the dock, and lands on the dock that all the kids have been leaping off in their movies. A woman appears – with a boat hook! Not since France have we seen this as a mooring technique! She then grabs the pontoon and sort of pulls them off the dock. Pete is at the stern ready to hand a warp, and I go to the bow, but there is a jumble of warps, and I’ve no idea which will be required. Pepe turns up. Pete said he handed the skipper a warp, but the bloke just jumped off! And then had to hold the arm of the woman to haul the boat back into place (there was a bit of a cross wind). Meanwhile, I’d reached the bow, and was holding that in. The bloke then comes forward, saying “Gracias” and secures a line to the bow – but not the windward one, so it’s next to useless! I then grab the side of the boat, before it wanders off in the wind, as he fumbles for one of the lines to tie it on. All totally mad. At least I felt that Grumpy Marineros wasn’t just off with me – I’m not sure he likes helping.

Why don’t they just have control and have the warps on board, and not on the dock?

Shopping was very uneventful after that! We actually went twice, to two different stores, as we couldn’t have carried the wine and the water in one hit! And we wanted some fish for supper, and the one shop didn’t have a wet fish counter. So, we are good to head off for four nights (after tomorrow), and a glance at the weather looks like we are set to bake and to have no wind for the week. Anchorages here we come – perhaps we might even swim. On the second trip, we took the long route via Cangas beach, which was HEAVING with people. So many lying out, having baked all day, presumably. Mostly only kids in the water, so presumably the water is quite cold.

I had to have a rinse off in cold water myself when we got back. Whinchat has been at 31.5 most of the day (but is now a balmy 29); just too much. It was 21:30 when I started cooking. Two fresh mackerel placed in the Remoska, a slug of white wine, salt and pepper. 20 minutes. Perfect. It’s like having baked them in foil parcels. We’ve had another crisp salad and a chunk of Pan Centeno…. and some cold white wine (which doesn’t stay cold for long in the glass).

Now it’s 23:00, and almost time for bed. Tomorrow we will move on, and begin our slow migration back north, filling in the gaps that we missed on the way south.

Today’s haiku (for the Grumpy Marineros):

cold eyes hold you with
impermeable resolve –
please, cut me some slack