Today’s trip to Pontevedra was a really good one – what a gem of a place! We were trying to equate it somewhere back home, it’s a bit like going to Bath or York, without the big attractions that they have, the Romans and the Vikings respectively. The Museum of Pontevedra makes no comparison to the exhibits in these places, but there is a charm and an ease in wandering the medieval lanes. 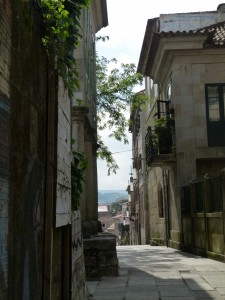 We positioned ourselves at the bus stop, fortunately early, as the bus rocked up and sped us along to Pontevedra. We’d toyed with the idea of walking, as it can’t actually be far, but an uninteresting (and quite long) walk it would have been. We were dropped off near Almada Arquitecto Sesmeros, which is what one book had described as the ‘green lungs’ of Pontevedra, and most definitely where you should begin a wander. The avenue, with a small park in the middle of it, is lined with beautiful former palaces, now various administrative offices. In any other ‘bigger’ city, they could hold embassies, and wouldn’t look out of place tucked away in Belgravia (well, maybe if they were cleaned up a bit, but granite doesn’t gleam so well, perhaps.) The first of the places of interest that we came across was the carcass of the church of San Domingo – ruined somehow (not explained.) We’d expected to be able to look around it, but it was sealed off, rather forlorn behind iron gates. We spotted a tourist office opposite, not supposed to be there, according to Pete’s map reading, but we went in anyway. We came out with a couple of maps, and explanation why San Domingo was out of bounds – some falling stones – and a suggested walking tour, and some idea of where to go and catch the bus back to Cambarro. A good haul from the visit.

Pete was tour guide, being in charge of the map, and there unfolded a wonderful couple of hours criss-crossing the small, narrow streets of the old town. There were few tourists around, and at times we felt that we had the place to ourselves. At others we were surrounded by parties of small school children, of the bouncy age, never quite managing to stay still. Though what they made of the museum of Pontevedra, who only knows. It was a collection of ‘stuff’ with nothing very much well curated, merely listed – and a lot of religious art. The best was the recreation of an Admiral’s quarters on a ship, although who’s it was wasn’t clear. There was a grainy photograph, a collection of mariners, but who they were, and what they achieved wasn’t evident (even in Spanish.) In many ways it was a great disappointment, but others, not really surprising. The welcome we’d had by the official wasn’t warm – he was decidedly grumpy, and I felt quite awkward being there. It was like we were almost too much trouble; and I’m sure our inability to speak Spanish didn’t help.

From the museum, we continued on the safer ground of the streets of Pontevedra, interspersed with little squares, or ‘praza’. So many cafe bars, with tables spilling into the streets or across the prazas – some with trees providing shade against the brightening skies. We’d left wondering if it would rain, and debating what to take with us, Pete taking a jumper. After a couple of hours he wished he’d swapped it for a hat on the way out. A liberal application of sunscreen had the effect of protecting his head from the sun, but the heat of this had caused the lotion to run and was smarting his eyes. Not ideal!

When we got to the next church to visit, we stopped for coffee in a lovely cafe, the Savoy, overlooking Praza de Ferreria, where we enjoyed just watching the world go by. We were certainly in the place for ladies who coffeed – there was a distinct absence of blokes. Fortified, we went into the Basicila San Francisco, a vast space. I’d read that it was over 100m in length, which caused Pete to say that Usain Bolt would run it in under 10 seconds. I had to stifle a giggle, feeling slightly naughty in the process. The space was scattered with people on their knees, praying to their God for something. The inside was surprisingly sparse, perhaps in part due to the cavernous space, as there was the usual trappings of the wealth of the Catholic Church in evidence. I noticed that the ‘candles’ you could light were coin operated electric lights. For a euro dropped in a slot, you could send an electric spark to remember your loved ones, somehow so far removed with the lighting with fire.

Back into the open, the man with the map continued, taking us down towards the Municipal Mercado, which was like most other markets we’d been in, except that there were many more stalls. The smell of fish in and around it didn’t vary. Pete decided not to take us over the bridge, but we looped back into the old town, vaguely mapping out places for lunch. We had a guide book with us, which listed a few places, so we tried to pick them off. The first no longer existed, so we wandered back to a Praza, Praza do Verdura in search of another. It was as described, crammed with local men at the bar, so we decided to sit down outside, not having other ideas. It was OK, and very cheap, a glass of wine, tortilla (very good) and slightly greasy chiperones (squid) all under £10.00, but it was average. If we’d followed the rules, we probably wouldn’t have gone in, but it was busy… We left, wandering back through the streets, and came across something that would have struck gold, we fancy. Both of us saw this place, no idea what it was called, but it was near the museum, and declared that it would have been THE ONE. Next time?

Pete had a fancy for ice-cream, and this is what we were in search of. We passed a kiosk with a young boy in a pushchair screaming “heladooooooo”, so we thought we’d lucked out. It was selling pizza, but we figured we must be close! Pete spotted an old boy eating one, and it was half-way down, so Pete deduced that if we went the way he’d come, then we might find it…. And we did! It was a self-service place if you wanted a tub, not for a cone. It took us watching another couple come in before we plucked up courage to give it a go. It was good, perhaps a bit on the fast-food end of ice-cream, but it was good nonetheless.

We’d seen and done just about what we wanted to, and we were finding it hot under the sun, so we decided to head towards the bus stop that the guy in the tourist office had marked on the map. It was only when we found the stop, that I checked the timetable that I’d photographed on my phone. We thought we’d missed it by 8 minutes, with an hour to the next one, but then we worked out, it was probably the departure time at the Bus Station on the other side of town… may be, just may be we’d be lucky. I couldn’t believe it when I saw a bus appear at the end of the street, and he stopped, letting us on, and then telling us, what I think was the Spanish for “not here, not the bus”. We’d been at a bus stop, but for some reason he wasn’t supposed to collect us. Anyway, it was the one for Cambarro, and he let us buy two tickets, and so we sat down.

It dropped us back where we were expecting, and after a quick trip to the supermarket, it was back on Whinchat. The WiFi has been disconnected, but that’s OK as it didn’t work anyway. A new provider was due to be connected this evening, but that’s not evident! We managed to get a weather forecast for tomorrow, as the administrator let me use her computer, and it looks to be OK, with the weather deteriorating Thursday/Friday with another weather system coming in. However, since cooking supper (pork chops and sliced potatoes with pesto in the Remoska), the clouds have descended, and you can no longer see the port of Marin on the other side of the river, nor the island that we rounded on our way in yesterday. The lady in the office warned us that tomorrow looks ‘horrible’, and if this is it, I’m not sure we will shake free from our berth.