Well, the ‘we’ll go south, whatever the weather’ bravado of yesterday? *coughs* The weather won! What a truly miserable day, a combination of the finest of Scottish and Cornish mists, with a very Spanish twist, as it was quite warm. The cloud was so low that you could not see the hills on the other side of the water, just this swirling, thick grey air. There was little wind, and what there was was from the south… so a cocktail of not-very-inviting-conditions for sailing. So, despite an alarm, and action stations being good and ready to go, by about 09:30 we’d stood ourselves down and decided to do “something” else. Pete is a self-confessed ‘not very good at this’ kind of a day. He likes plans, busy and action. I saw it as a laundry opportunity!

We dithered about what to do. The girls in the office were all for sending us to Santiago da Compostella, but I have a fancy for an overnight stay, not a couple of buses and arriving as everything shuts. I pulled a face at that one. We sighed, and sighed some more, looking at the skies, until we decided that we’d *just* go to Noya. We have conflicting information about it. The pilot describes it quite well. The Galicia guidebook says that Muros is nicer. The CA app reviews say that it’s not worth a special trip. It’s billing wasn’t exactly high. However, we decided that we’d give it a go – Portosin certainly hasn’t much to fill a day.

Pete had a bus timetable from the marina office, dated 2013. It’s still current, however, it only has the departure time from Riviera (further south) and it’s roughly 30 minutes from there (actually, it was 45 today). There is no actual bus stop marked in Portosin, but you wait by the bank/supermarket. Just as we were about to give up, the bus appeared, and my day-by-day Spanish got us two tickets, for a quoted price that I understood. Small delight. Within 15 minutes we were in Noya, deposited in the quite unattractive bus station.

We’d spotted a market along the river, so we headed back towards that. As markets go, it was mostly clothing, linens and so many trainers. Plenty of shell-suits – which seem to be the fashion item of choice in Portosin – and aprons. However, we lucked upon a more artisan seller, selling cheeses, jamons, chorizo, and bread. We stood in line, and received little morsels of his goods. It was brilliant, a queue huddled under his tarpaulin cover, munching away. We watched an old guy buy enough chorizo to last six months, he must’ve bought 50! He was rewarded with a gift of an unlabelled bottle of white wine, albarino, apparently. The next lady bought bread, cheese, and pancetta, sliced with the ribs still evident. Her bonus was some mini chorizo. And then it was us. The usual question about what was ‘centeno’, which we bough a massive slab of, some of the cheese that we’d tasted, and then a couple of chorizo. Our bonus was a mini slab of maize bread, which was the one I’d thought was rye. Oh my, how gooey is that. Can’t wait for breakfast! Might have to poach an egg…. From there we wandered into the static market, fish stalls in the centre, meat around the edge, as shown below… 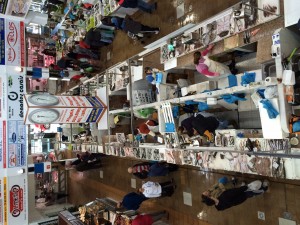 Pete really wants to make the Raxo, so we decided to buy some pork loin. Step forward Mrs W-H! In Spanish, I was thrilled to order 400g of ‘lomo de cerdo’. Pete had it marinading by the end of the evening. After the exertion of that, and buying a cauliflower, it was coffee time. We found a charming little pattiserie where the little taste was an apple cake. Pete had two. Technically we shouldn’t have needed lunch, but what else was there to do on a rainy day in Noya? Find the churches, first.

The one church, Iglesia de San Martin, sits in a small square, and is supposed to be the town’s highlight (according to Footprint Galicia). Well, the front was covered in scaffolding, so you couldn’t get in that way, and the back was locked. An old guy was standing there. He indicated to me to rattle harder. I did. He then walked off, saying something. He turned to us and said “follow me.” It was like something in a movie for a moment. We looked at each other, and trotted behind. He pointed to another door, a tatty green door, and indicated to push. I did. It didn’t budge. He shook his head, and pointed to a door bell, so I pushed that (Pete some way back), and watched the old guy retreat. I was tempted to do the same. We waited a few momements but no one came, so we scuttled off. We’ll never know if the Iglesia de San Martin is the gem of Noya. We found the other church, approved by the guide book. Iglesia de Santa Maria, in the middle of a town cemetery, which reminded me of a shrunken version of Buenos Aires. This rather forlorn church had no seating, no pews, but housed a collection of tomb stones taken from the graveyard and displayed. They were rough slabs of granite, ranging in age from 10th to 17th centuries, with a variety of carvings on. Some were stick men, or stick features, tools of their trades. Some were more elaborate. In this shadowy church, bereft of any comforts, it was quite eery. I enjoyed picking at words of Spanish to try and work out what the curation was. I thought it superior to the rather shut Iglesia de San Martin. 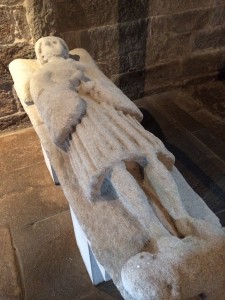 We’d reached the lunching hour, on the run up to 14:00, so we wandered around for a bit until we found somewhere that met Pete’s criteria (remember, interesting and busy). Tasca Tipica, somewhere in the old town was an awesome find. There are tables outside under the arches, just about out of the rain, and then a bar area, and further behind a restaurant area. The walls are thick stone, and it has a rustic feel. Our waiter rescued us from the Galician menu (a twist too far on the Spanish we were trying to accumulate), and we ordered a few selections. It was outstanding. Fat, juicy pieces of octopus (as photographed), homemade croquettes, grilled squid (the best bit) and a mixed salad. We passed a couple of hours there, and missed a bus in the process. No worries. 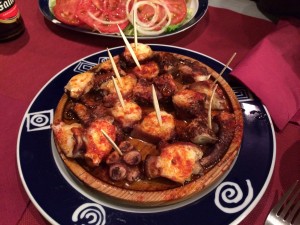 By the time that we’d hit a supermarket to buy a bottle of wine or two (and chocolate) we got the bus back to base. Our verdict of Noya? It more than filled a chunk of a rainy day, and particularly with market day, we’d say it was worth the bus trip. By the time we got back, it was only drizzling, but warm with it. I was intent on doing some laundry, tick, achieved, and that was it for the day in terms of activities. We’d activated my Euro Traveller thing on my phone so we both enjoyed speaking with our mums, and we had a little shaky Facetime with Georgie and Mary. All very lovely.

Pete was chef this evening, cooking up a Remoska Paella using the chicken bits and some chorizo. At lunch, I didn’t think I would eat another thing, but it was delicisio, and nice not to cook for a change.

We were rewarded by a magnificent (magnifico) sunset, as the wind shifted from the mizzly south to the clearing skies from the north. It was such a welcome sight after the gloom of the day. You can really understand why shepherds might have taken such delight.

We’re determined to leave tomorrow. The sun is supposed to shine, and the wind is due to be from the north, blowing 10-15knots. We’ll take that. We’ve paid tonight so that we can leave early in the morning. If we cast off by 09:00, that’ll be good enough.

Day under a cloud,
north wind blows the blues away –
a sailor’s delight

One thought on “Noya”