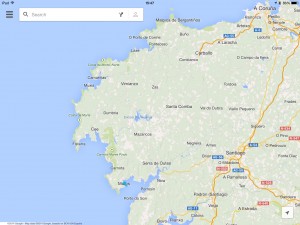 Galician coastline – we’re where the pin is on Muros

Any sailors reading this will well recognise the ‘dither’ that can happen when considering the weather forecast and one’s plans for the day. Over breakfast we studied the latest forecasts, consulted with the charts, and thought about the pile of laundry. We decided that it was not a good idea to plan to anchor in Corcubion, around the Finisterre headland, where we’d hoped to. After all, mooching about the Rias is partly why we’re here, and we seem to be zooming by! This particular spot seems to be particularly exposed to the south, which is where the wind is forecast to blow up from. The prevailing summer winds are northerlies, so usually it wouldn’t be much trouble. And so the dilemma begins. The forecast for the day was for no wind, well, very little, so it was a day of motoring in prospect (some 40NM) to Muros (for a chance of laundry and provisioning), or a day of staying put and doing the laundry and provisioning in Caraminas. What to do? I was very apprehensive about a long day at sea, given my flirtation with the Mal de Mar previously, but equally knew that we’d be two nights in Camarinas, because beating in a strong southerly in the pouring rain wouldn’t be an option for Tuesday either. Pete said that it should be my decision. No matter how many times you look at a forecast, or study a chart, it doesn’t give you any new information. You just have to plump for a decision.

I decided that I would err on the side of caution and that we should stay put. I thought I might regret that the following day, when we were a little stir crazy, but that was that. I then grabbed the Spanish Phrase book, and marched up the hill towards the laundry, picking out a couple of words that I hoped would explain that I had a lot of laundry and I wanted it back the same day. I needn’t have worried, because it was shut. 09:30, and no sign of life. By the time I’d marched back down the hill I decided that we would move on, after all, so as I climbed down the companion-way, I announced “let’s go!” A somewhat bemused Pete said nothing, and prepared to go to sea. Some thirty minutes later, we were under way.

Pete hadn’t even plotted a route, and I knew that there were some navigational hazards to pick our way around, so I took the helm on the first leg out on the leading lines that we’d followed in, as Pete went down below to work out our route. Just as I was nearing the end of the course to follow, and knowing that we were taking the southern route out (we’d come in from the north previously), the next way marker popped up on the screen. We were good to go.

There was a slight swell rolling, probably the 1-2m as forecast, but it was very lazy – by that I mean a slow rhythm. However, as we turned south-west, to come out around the headland, it was a bit lumpy.

“Today this will be described as ‘tippy rolly’,” I announced. Pete agreed. We just had to hope that the motion would wane as we headed with more south (therefore putting the swell more behind us), and as we headed into deeper water.

I’m pleased to report that we had a good day, despite there being no wind. In the 40NM of being at sea (until the last couple of miles), the maximum speed was 8knots of wind. As Pete put it, it wasn’t worth the pfaff of hauling the mainsail to have it flapping about, so we didn’t bother. We seemed to join a flotilla of boats heading south, most of which were motoring, although one boat, Jajou (or something like that) hauled its genoa and sailed. We saw them come into port last night, about three hours after we arrived. Full credit to them.

For a while we were relatively close to the shore, so that you could really pick out the features of the coastline. Pete told me about a place that we passed quite early on. A church perched at the end of Muxia’s headland, at the southern tip of the mouth of Ria Camarinas where there is a Festival for fishermen to pray for safe passage, and the offering is a small model of their boat, and so you can walk out to the church and expect to find lots of model boats. That would make a lovely walk. There’s a marina (a new one apparently), so perhaps we will make a pilgrimage to the church of boats on the return.

Somehow I was on the helm, and on watch all day, for the eight hours at sea. It wasn’t by design, it just happened, and most of the time I was hand steering, giving Doris a day off. Actually, I only deployed her when the blood stopped flowing in my hands, turning my fingers white, and I had to bring them back to life. It wasn’t a warm day, but it wasn’t really cold either, so the white fingers seemed a bit extreme. I was in cropped trousers and my RAFYC jacket, Pete was in his usual jumper/Rustler jacket combo, although he did remove his jacket when the sun shone later in the day.

The course that Pete had plotted took us offshore a little way, perhaps three or four miles, as there are all sorts of rocks and shallows that present potential dangers. We decided today that we must be cautious sailors, worrying about the wind/lee shore when anchoring, always trying to keep up with the weather, and taking the most prudent routes. In fact, perhaps we could have taken an inshore route, placing the hazards on our starboard side, as the conditions were so calm. But then, we don’t have good enough charts to do that. Of course we have a chart plotter, but if that were to fail….. Is cautious good or bad? Well, I think we are who we are, and cautious is fine by me. We tracked a couple of boats that took the inshore route – the boat that was sailing, and a Swedish boat, Atlantis abv Gothenberg. We told ourselves they had better charts.

We probably went as far west as we are going to go on this cruise, Cabo Finisterre is the most western point of Spain, and we’d rounded that. Cabo Finisiterre is an impressive towering cliff, with a lighthouse on top (which apparently does have a restaurant, which you can walk to, and we hope to on the way north as we missed it going south). It was around here that we saw flocks of gannets, gliding amidst the rolling seas.

I had the spot of the day, “dooooooooophiiiiiiiiiiins” off the starboard bow. A few dorsal fins appearing through the oily swell, oily in texture because of the lack of wind, not some environmental disaster! They were on a mission somewhere, and didn’t give any kind of display, they just ploughed onwards. We watched them until we lost sight of them; not that long given the swell of the oceans.

My observations about the sea today were that after a while, I stopped noticing the movement, as I thought you must do. Pete spent the day reading the downloaded paper, which I don’t think I’m up to yet, but I could happily pick things off the chart plotter, querying into AIS. The swell becomes a topic of conversation during the day. “It’s not tippy rolly anymore,” or, “I think there still must be swell as the fishing boat half disappears every now and then, ” and, “there’s definitely still swell because the cliff top that I’m marking my course to disappears quite rhythmically…” But, by the time we’d rounded into Ria Muros, it had definitely flattened out…. and rather unexpectedly, this is when the wind arrived! We’d rounded the rocks off the entrance to this very wide Ria, around Punta Carreiro, wider than the Fal for example, and there was no stopping Pete from unfurling the Yankee so that we could ghost along for the last couple of miles, engine off, although unfortunately the sound of the fans cooling the engines never ceased, so we were always with the mechanical noises from Whinchat.

Our arrival in Marina Muros seems to have coincided with a visit by Spanish Customs, so shortly after mooring up, we were boarded by three officials. They were very polite, even jovial, although they had to debate whether Pete’s response of “I don’t know” to the question of where were you going next, was an appropriate one. Fortunately the guy with the pen seemed to think it was OK. It is clearly a formality only, as they didn’t ask to look down below, or any searching questions about what we might be carrying. According to the pilot book, Galicia is where most of the cocaine bound for Europe is landed, but we evidently didn’t fit the profile of drug traffickers.

The marina at Muros is two years old, and can accommodate many visitors, around 150 based on the empty berths, I’d guess. There is a resident fishing fleet, and a few small motor boats. We are one of four boats in today. The facilities for visiting yachtsmen are like no other – a WiFi room with a couple of sofas, a little kitchen with ‘free coffee’ and good laundry facilities. The ladies showers, well, deluxe! None of your public swimming pool standard, but something that wouldn’t look amiss in a spa resort! Can’t wait to road test those!

A first ‘turn’ around Muros reveals it to be a very charming town, medieval at its old core, with lots of narrow, twisty streets, steps between levels. We stopped for a beer, looking at the water, and then provisioned for an evening meal. We bought the most beautiful looking veal steaks, which we had with garlicy potatoes and sliced beans. Somehow we missed lunch (a cupa soup and an oaty bar) so we were both ravenous. A day of boat jobs for tomorrow, so a no alarm day ahead.

One thought on “Camarinas to Muros”