This was a planned day ashore, after the relatively long day on passage. No alarm clocks. No schedule. No expectations (it was Sunday). We started the day with a shower – and a relatively short walk to the facilities, all of 50m, better than 500m – and unlimited hot water! When you are on boat rhythms, small things like freely running water get really exciting. For the record, the showers at Camarinas are rated highly, the water was hot and wasn’t on a time release push button. Pete, for one, was in shower heaven. 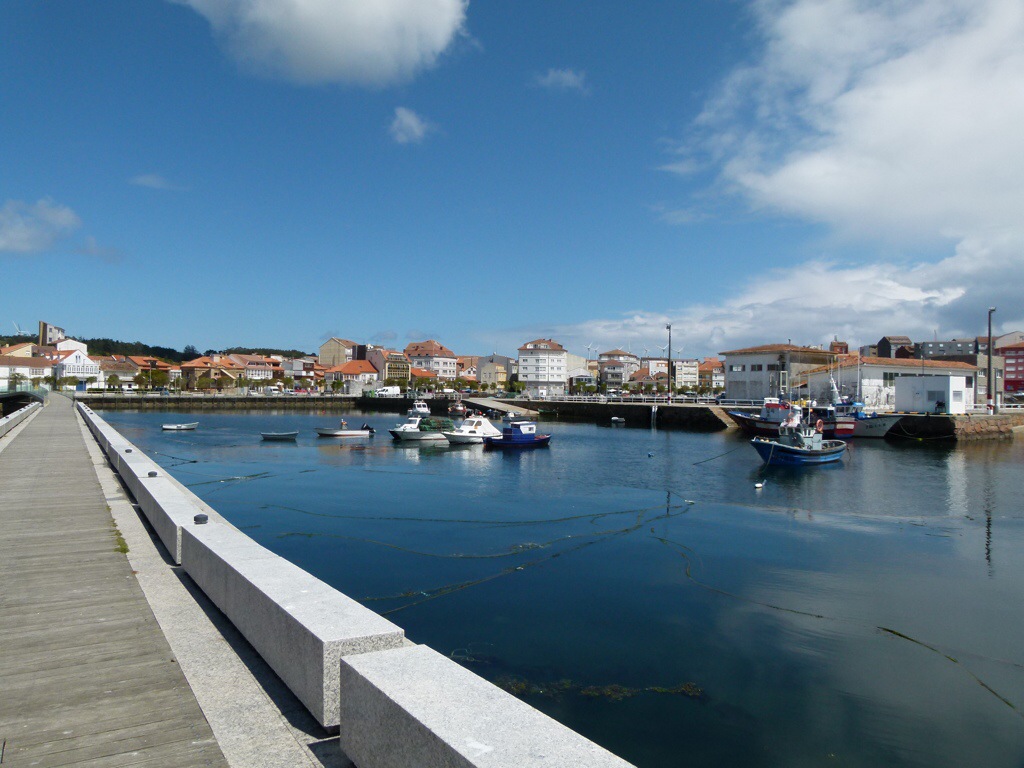 We know not to expect huge things from a Spanish town on a Sunday, but what a wee gem of a place! We decided we’d have a little wander after breakfast, and walked over the evidently new bridge into town. Pretty much everything was shut – except a plethora of little cafes, with people scattered between them taking coffee in the sun. We were walking towards what Pete thought would be a beach, but the chart was way out of date, as we were heading towards an industrial part of town, but en route we found an Artesan Baker (Sunday opening!!!) and we went in, with me waving my few words of Spanish at the baker (thanks sooooooo much Jeannie), who preceded to sell us a glorious round of rye bread. It was all I could do to stop Pete from taking off a chunk right there – it was warm, soft, the best way for bread! We meandered back towards the harbour, and took a beer/wine in the sun before deciding what to do. We’d vaguely thought of being very Spanish and having a long lunch, but the bread we had was so tempting. We decided that we’d head back to Whinchat and have a bread/cheese/jamon serano lunch. Wonderful!

Pete then pulled out a guide book, and we discovered that Camarinas is the place for lace…. which explained a museum we’d come across (open, but not that inviting) in town. He announced that we could walk to Pharo Vilan, along some dirt road, which would be three miles. What else was there to do (except perhaps lie in the sun and read a book, but we’re not really those kinda people), so I donned my walking sandals, tied my Rustler jacket around my waist (you can never be sure of the next shower coming in my relatively small experience of Galicia), slapped on some Factor 30 (a minimum for us) and off we toddled. We headed up the hill, out of Camarinas, soon joining what felt to be a procession, a few groups of people strolling. We were clearly taking part in a typical Sunday activity. However, all peeled off at a sign for the football stadium, but we carried on. The dirt track never really revealed itself, having been replaced by a smooth tarmac surface, relatively recently you’d surmise.

It was a glorious walk. The verges were thick with wild flowers – don’t ask me to name many, but bright yellow, small blues, small pinks, the odd foxglove, and interspersed, lots of wild fennel! It was in some ways like walking at home – except the sound was most certainly belonging to the knees of the cicada, most definitely not heard in Cornwall. We walked around the edge of the Parc Ecologique, or wind farm. These massive structures towering over us, the ones we’d watched from the water the day before (perhaps Pete more than me….) They have a graceful beauty to them, and a whisper as they rotate. I never really understand quite what the fuss is all about when people oppose them, they are quite magnificent, and give power in a far better way than burning coal or in some nuclear way. Anyway, the Galician coastline is scattered with these wind farms. As we headed beyond the shelter of the trees, and towards the open coastline, we were trying to work out where we’d come the previous day. I wasn’t much help, but Pete was trying to work out the bits of coastline that we picked our way around.

As we approached the Pharo Vilan, the landscape opened out, revealing what might be a very hostile landscape. The gorse shrubs were low lying, presumably hanging on tight against the prevailing winds. There were no trees – well one or two – so the form of the landscape could be truly appreciated. And above it all, on a rocky bluff, was this striking lighthouse. 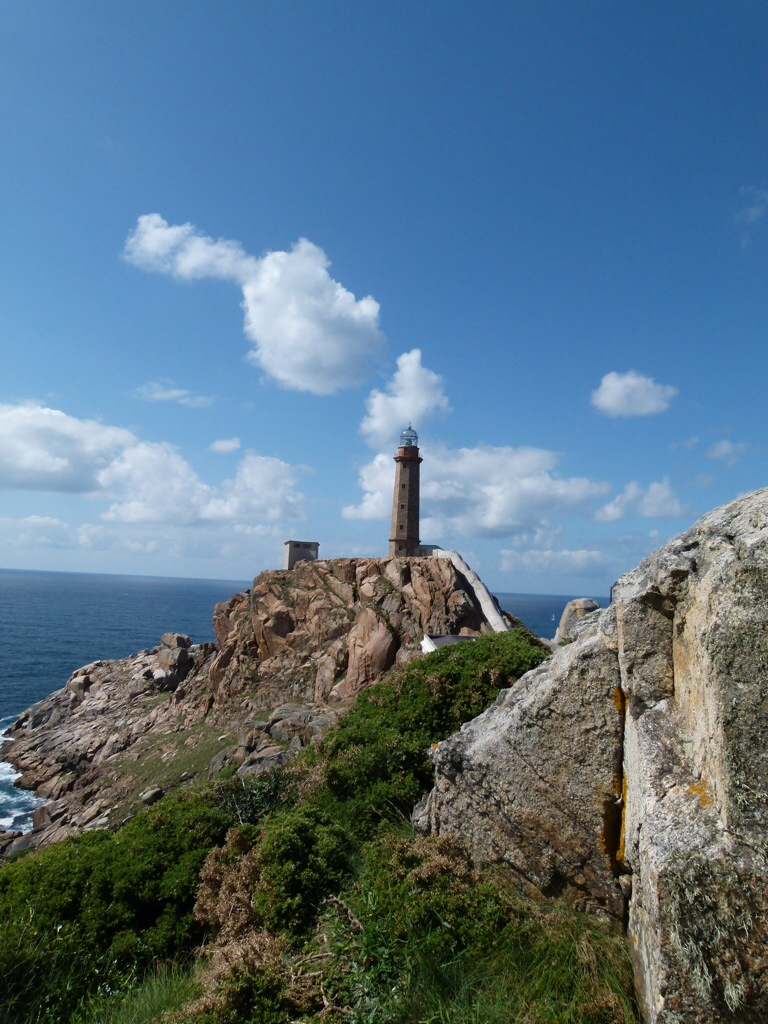 On the path up, my shoes slightly rubbing, my legs weary and my throat parched, I joked to Pete that they should have a bar there – no chance, says he. How wrong was he? There was a small exhibition about the Costa de la Morte (three charts depicting all the wrecks, I counted 33 around the Camarinas shores, goodness knows how many in total). Somehow fitting was the sight of a wreck on the shores just behind the lighthouse, barely discernible to the naked eye (and certainly not when we’d debated it from Whinchat the day before), but to the super zoom – no problem. 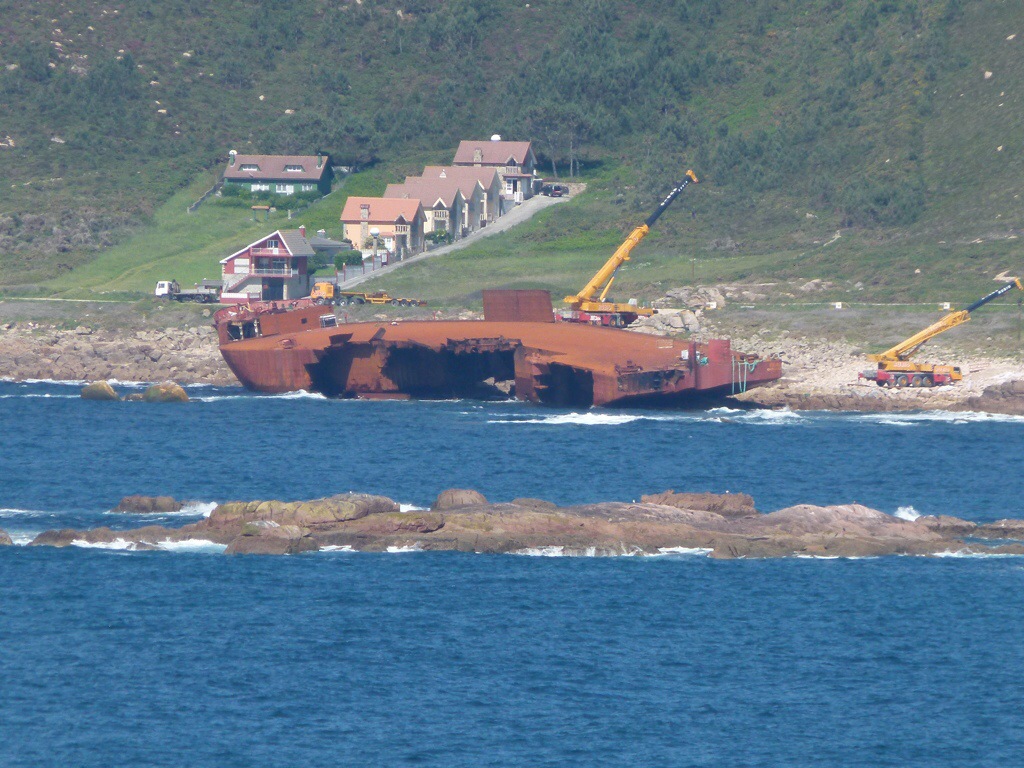 The delight of the afternoon was that there was a bar! We took water, and a leaflet that showed us that we could take a coastal path back to the port. We were all for that! The walk back was just delightful, perhaps a little longer, but we walked hugging the coastline, the open water on our right (starboard), the rugged landscape on our left, and a group of walkers to amuse us. We met them at the start of the path, when they were taking water. We passed them when they stopped to chat, they overtook us… then they stopped, we passed them… they overtook us. It was the source of much amusement for them, clearly identifying us as english. It was a case of the hare and the tortoise; the steady pace won the day, as when we made port, there was no sign of them.

What a perfect afternoon! The sun was high in the sky; no need for the Rustler jackets, and Pete even walked in his polo shirt. Remarkable. By the time we got back to Whinchat it was after 19:00, so time to unwind and prepare supper. Time just leaks on board, and it was about 21:30 when we were eating. We were debating what to do the following day – we had looked at the weather, which was forecasting a southerly blow on Tuesday – oh joy, the direction of travel, but more importantly a planned anchorage that would put us on a lee shore. I went to bed not really sure what the following day would bring. We decided that we’d set an alarm and check the weather in the morning. Laundry is getting to near critical levels, so that was also a factor in what to do. Such wonderfully mundane things to worry about. Now that’s what leaving everything behind is about!

2 thoughts on “Shore leave in Camarinas”