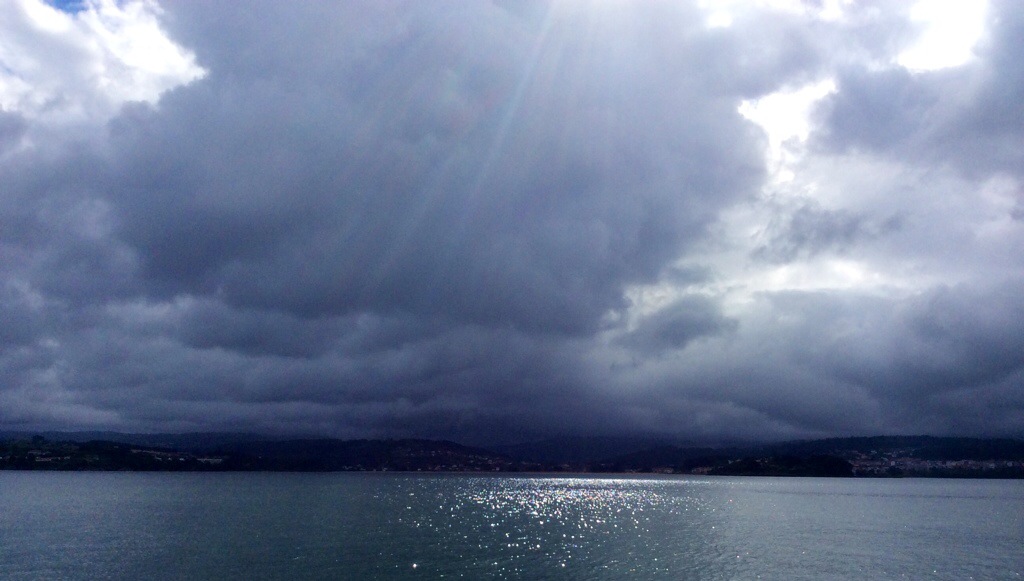 Looking east from the harbour wall…

Not all days are spent in an idyll, although perception might be that it is. Today was one of those days. We didn’t expect to go far, because of the swell forecast (+4m), but we thought we’d move. Only we woke to the sound of very heavy rain beating down on the coach roof, just torrential. It didn’t inspire either of us. By the look of the sky, it had a ‘set in’ feel about it, thick bands of grey scurrying overhead, busy in their work of making us wet. I went to pick up the weather forecast (the 500m walk to the WiFi point), and it didn’t cheer either of us…. which set us in a pattern of ‘oh what should we do…’ Stay, or go? Staying in Sada? Or if going, where? Coruna? Ares? It never seems right going back somewhere you’ve come when you’ve just set off. Ares? Another small town, which we’d arrive at when it was shutting down, wet, cold and having travelled all of four NM.

We dithered most of the morning, and decided to do something positive. The laundry! It was exactly the sort of day for chores (I had already cleaned the heads and the oven, oh the joys), so we loaded the laundry bag in a bin bag to prevent it from getting wet. Well, we got the keys to the washing room, and were shown how to work the machine, and I asked about the dryer? “Eees broken.” “Que?” It broke last week (when it was sunny) and they hadn’t gotten around to getting the company out. With no prospect of getting our washing dry, we surprised the marina staff by not bothering. What kind of a day is it when you can’t even do your laundry? At that point, in a fit of peak, I was all for leaving and heading out of Sada. However, we sought reason in a trip to get a coffee (and find some of the artesan bread we’d found in Coruna – if anyone knows the Spanish for Rye Bread, please comment back, as I’m sure that’s what we had there, and found it everywhere in France, Siegle). We could have gone, but we don’t have to get wet, and we’ve time, and we are really just making time anyway until we can round the coast…

So, here we are. In fact, the clouds did peel back for a couple of hours, and we’ve managed to get our towels dry for the first time since I’ve been here. We had an excellent boat lunch – local lomo, bread (I had wraps), cheese, and the largest, juiciest apple we’ve had in ages! I braved the showers again – this time bloody freezing, but actually ever so refreshing – enough of a report to make Pete not bother!!! And for the first time since I got here, walked without a rain coat on! Pete has downloaded the paper, and we’ve been able to sit (for a short while) in the cockpit in the sun – although let’s be clear, Pete hasn’t taken off his winter jumper!

I spent a hysterical half an hour trying to do some pilates in the workout zone on board (tucked down between the table and the seats in the saloon (it is literally the length and width of the yoga mat), but Whinchat was yanking about on her warps, so the added instability was quite a challenge. Try doing a side-plank on a surface moving backwards/forwards/side-to-side. It was very entertaining!

Soon we will go for our evening promenade, take a beer, and watch Sada prepare for its Jabi Festival this weekend = a celebration of eating cuttlefish! It begins tonight with a concert – which in Spanish style doesn’t begin until 23:00. If it is raining, and we’re the other side of a bottle of Rioja, I don’t suppose we will see it, but will doubtless hear it across the water.

2 thoughts on “Still in Sada!”