We’d decided that we’d ‘book’ a day of shore leave, initially to explore Sada but as it was quite shut, we’d exhausted that option! We toyed with the idea of setting sail again, but the forecast wasn’t great, and we keep on saying to ourselves ‘we have time‘, but having been a smidge disappointed with all that Sada had to offer on a cool, damp evening, a cool damp day held llittle potential for delight – but that’s why we have pilot books. Pete found that we could take a bus from the front at Sada to the medieval town of Betanzos. Result! That was the plan for the day.

We dropped into the tourist information office in Sada, and were assisted by a very friendly chap, who printed off a bus timetable, and told us where to wait. It was an hourly bus, at the time of writing, five past the hour, and we only had 10 minutes to wait. Betanzos is only about 10KM away, so we weren’t heading off on a major excursion, but that suited us, because it meant it was a kind of lunch/mooch spot. Our Spanish was clearly suitably rubbish when we got on the bus, as the bus driver said ‘what do want, English?” I laughed. Two tickets, three euros. We both said that it was a good thing to have done already – a sense of purpose about the day.

We arrived in a big square just as a market was clearing up – well, it was lunch time! We decided to try and find the Tourist Information Office, and perhaps a map. Well, we found the building, but there was a notice to the effect that the office was shut today because of a regional celebration day. I couldn’t believe it! Another place that was shutting. Of course this meant that the town’s museum would also be shut, so we were flying blind in Betanzos. There was nothing else for it but to find lunch, and Pete’s approach is to wander around until you find something that is:

There were neither of these in the first pass of the bars lining the square, so he dived down a small alley, and we hit upon the target. A bloke was standing outside, leaning on a ledge, smoking a pipe with a very nice glass (the quality of the glasses can speak volumes) with red wine in it. That was it, we went in. What a great choice! It was full of locals, and only one other tourist couple (with a Lonely Planet guide to Spain). They looked retired- British. It was a Spanish-only-speaking-joint, so we had to rely on what we’d picked up already, the phrase book that I had (not that helpful) and the miming of the waiter. We both plumped for the ‘menu’, and were served a complete feast. First off came an empanada ‘taster’, which we think was onion. Then the tortilla, as an apetiser. This was the colour of the sun, and was served in a complete round. I cut a slice, and liquid seeped from the middle, the uncooked egg dribbling out of the centre. I was also first to taste, and when Pete asked me what the filling was, I described ‘crisps’. Small squares of slightly salty, wafer thin potatoes, which could have been beaten up Walkers! It was excellent, despite my seeming description to the contrary. To be honest, I could have stopped there, but another course came. This time it was small roasted potatoes and slow cooked shin of beef (that’ll be the bit the waiter mimed). It was awesome – but not the ‘small’ lunch that we’d thought about having (even though it was another course that I only ate part of). All of this came with either red or white wine. We both selected red, and I was surprised that it meant a bottle! We had a couple of glasses, but neither of us wanted any more. There was dessert to come! This was rice pudding, which neither of us could remember the last time we’d eaten it. It was cold, with a caramelised topping, rather like a creme brûlée, and was fragrant with cinnamon. It was delicious, but half eaten for both of us. We then had the strange coffee to look forward to. Heavily stewed, and served with a bottle of liquor to splash into it. Pete declined me serving him, so I put some on a spoon this time and added a couple of drops. It did a good job of taking the burnt taste out of the coffee. If I’m honest, I’d much rather go an expresso. All of this came to 33euros, remarkable value. And where was this gem? I’m not sure of the street, but it was called Meson Pote (apparently they’re on Facebook).

A couple of hours of lunch took a good bite into the day, and so we ventured forth into the town, ambling at a slow pace because of the fullness of our bellies. It was like a ghost town. The market had gone, the people had gone, and so we wandered around the old town of Betanzos. A lovely amble, but I can’t help but think that it might have been better had we had a map. I guess we’ll never know, as I doubt that we will have reason to go back to Betanzos.

We caught the bus back to Sada, just as the next run of heavy rain bowled into town, so we sat in the bus shelter waiting for the worst to pass. From there it was to Carrefour, to pick up something more tapas like for supper on board.

We decided that we should try out the marina showers when we got back. No dallying, just pick up our towels and go. Even if it were raining (which it actually wasn’t). The showers are ‘free’, and are very clean, and without limits. By that I mean that the water is constantly running, without time release button. I hadn’t reckoned on many of those. It was, however, on the cool side. We wondered if the water was solar powered, which would make sense. However, on a cool, damp day, you just want to feel the heat in your bones, and it didn’t achieve that. That said, I’d take clean over hot any time.

tall buildings, shadowy lanes
secrets in the walls
whisper as the town wakens 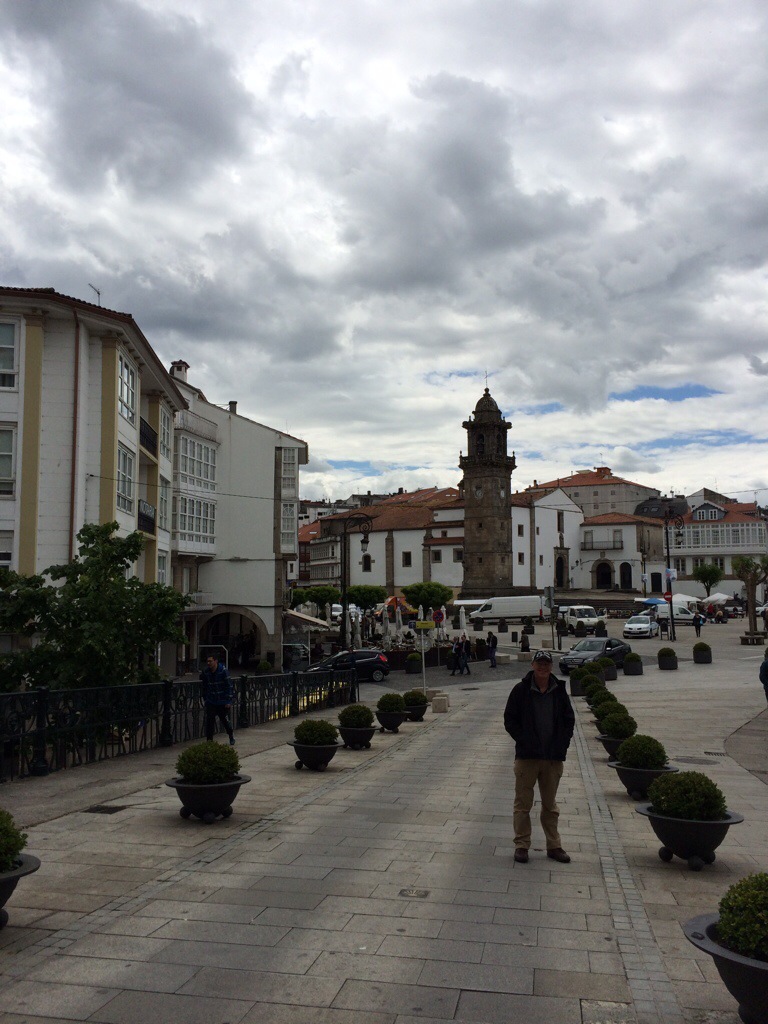