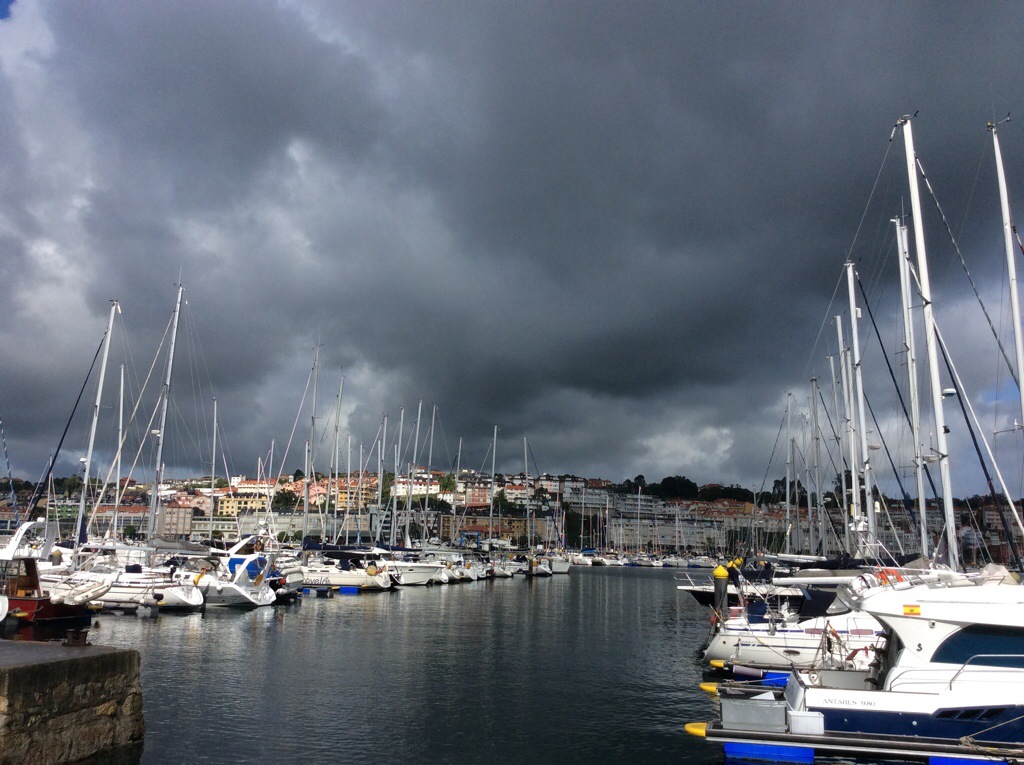 Sada from the breakwater wall

Peter was itching to be out of port, having been in Coruna for some days, and there was a sort of weather window today, before stronger winds, thunder storms and more swelly seas were forecast. I might have selected another day in port were we not to return there, but that’s a given.

We didn’t do anything very quickly, but set an alarm ‘just in case’. At 08:00 we were both woken by the electronic chimes of my phone. It seems that waking early is not something that we are going to do easily in Spain (how Spanish of us)! The usual level of pfaffing to leave – stowing a week’s worth of unpacked boat, paying the marina, preparing to set sail, all seems to eat up time!

The Marina Nautico facilities are really good. There was a lot of space in the marina, we seemed to be one of three visiting boats (another British boat and a Norwegian boat that crossed Biscay a couple of days after Pete in ‘perfect’ conditions, what a difference a day makes, as they say). The showers were clean, free to use, and on or just above body temperature – fine for me, but the source of much mithering for Pete, who would sooner try to take a layer of skin off when he showers. The WiFi was supposed to be free, with a code, but we found it better to stand outside the (closed) bar and use theirs. It also worked inside the Ladies, useful for when it was raining!!
We were charged for four nights, and could have had one for free if we’d stayed five. As it was the extremely friendly harbour official gave us a bottle of wine. How lovely!

We slipped our lines somewhere around 11:00, and said good bye to La Coruna, As we headed out of the marina and towards the open water, the wind appeared from out of nowhere. We had some 20-24 knots of wind behind us, the forecast direction but not the strength. OK! Pete decided that we’d just unfurl the Yankee (me going to totally the wrong place, in trying to unfurl the StaySail, oops), and so we gently edged our way out into the bay. Pete later said that merely riding under the Yankee was pure laziness – the double reefed main would have taken some grinding out, and given the wind, it was a marginal call. With this crew on board, as opposed the crossing-crew in the shape of racing Simon, he could be as lazy as he liked.

The landscape reminded me of that in France’s Cap Finisterre, particularly that around Brest. Wide open sea on the one hand, and short cliffs being pulverised by the incoming swell. At 2m it wasn’t even that bad, these long languid rollers, with little ‘wind sea’ as they say to whip up any breakers. Unfortunately the skies were heavy with rain, although none fell when we were on our short passage, but it was cold. I wished for another layer, probably my foulie trousers. Everything seems so much more pleasant when there is sunshine – and we’d take broken sunshine! Not to be today. I was watching the cliffs for ages, watching the swell crash on the rocks. It was remarkable how much white spray was produced from such benign conditions. No wonder there were no houses on this particular stretch of coastline, in much more sea, they’d’ve taken a pounding! I was trying to calibrate the height of the spray with the swell that we felt. Every now and then (would it be every seventh one still?) we would be lifted higher by the water, and as we were lowered, parts of the coastline vanished in a hump of blue-grey sea. This would be the one that would crash higher, but could I follow them across the water to the coastline – no. I always lost count, lost the rhythm.

It was one of those very rare occasions where the wind seemed to favour us, allowing us to complete a 180 degree course (more or less) on a single starboard tack of the Yankee – usually when bending around a headland, we always seem to be beating into the wind, but here it was, helping us out. We knew that we could be going faster with more sail out, but there was no rush and we only had 11NM planned (it would have been 4NM in a straight line, apparently). Pete hel med most of the way, with me swapping when he was too cold, this was only with a couple of miles to run. In my brief stint, I also grew cold, to the point that the tips of my fingers went white. Kate gives it a name, but it’s when your body gets cold and it stops sending blood to the extremities. I was not that cold, but clearly my body’s systems had other ideas. I had the upwind leg, and with a mile or so to go, the wind started building. I was keeping an eye out for a yacht, seemingly quite heavily reefed, heading out from Sada, we were trying to hold a windward course with just the Yankee. I wasn’t doing too badly, especially as the wind was bending helpfully, so I was constantly trying to pinch ground. Eventually I had to concede, as we were getting further from our last waypoint, and the wind was blowing quite hard, driving white horses down from the river. “It’s funnelling,” said I, as Pete furled away the Yankee, and we motored towards the large breakwater. That was more out of optimism than fact! As we approached the marina, there was a chap standing on the end of the visitor’s pontoon, waving. He wanted us on the inside, port-side to, and with the wind behind us! Pete wasn’t convinced of the wisdom of this, but he went to a free space, ready to take our lines. Mooring downwind in 20knots of wind? It takes great skill, and fortunately that’s my skipper! The wind was actually slightly cross wind, coming over the aft quarter, so Pete took a wide turn, causing the marina chap to question,
“this side?”
“oh yes..” came my response back.

He took the spring, and ran it back, so that we wouldn’t mount the pontoon (very helpful) and I climbed off and secured the port bow, Pete lassoing the cleat to get the stern on. We were in, and Pete had done it magnificently. A second spring tied, and the starboard bow, and we weren’t going anywhere far (or so we thought). Pete wanted to present all of our papers, and find a bite of lunch at the marina bar – success with the first (with a good WiFi, although not at the boat) and a poor offering for lunch (the bar was shut), so it was a Whinchat lunch using up some meats from the passage. It then started to chuck it down, and with the pattern of Spanish life such that everything shuts for siesta between 13:00 and 17:00, there seemed little point in venturing into a sleepy town. We lounged in the saloon, reading books and drinking fruity tea. It was almost cool enough to put the boat heating on, but neither of us was going to give in first!

About 17:30 we wandered into town (it must be 500m to the offices/shower block), so the town isn’t a short hop, although it’s not far either. It is far when it seems deserted. It transpired that today was Sada’s ‘shut day’, so I was doing well here, with ‘shut’ La Coruna on Monday. Take that, and a rainy, chilly May afternoon, then it’s not really the recipe for much activity. There were a few people bent against the wind walking their dogs, but hardly anyone else. Most of the shops were shut, and those bars that were open seemed to have few customers. We walked around to the sandy beach – not a soul on it – and decided to stop for a beer in one of places that had people in it. Only, by the time we’d got there, we were the only ones. It was a Hamburgerie, not our finest choice on first thought, but the drinks were OK and a plate of olives was a nice touch. We watched the world slip by, although Sada didn’t exactly pick up its pace.

We returned to Whinchat to cook supper via Carrefour, a very well stocked supermarket for us yachties! And not so far (except the hike from the marina entrance to the visitor’s pontoon). On returning to Whinchat, we were perturbed by the movement of the boat. Not that she’d moved in a sense of coming untied, but she was restless, swinging between her warps, and snatching on the bow, the springs, the stern. Pete was really stressed about it, because it didn’t make sense. The wind had died. I noticed that all the boats were doing it, so it must’ve been the sea, although to look at it, it wasn’t obvious. There were no waves rolling in, but there was a bit of swell, at enough of an angle to unsettle everything. We tightened a couple of warps, and added a second spring, which seemed to help, but it wasn’t nice. That an a red light on the panel (a non-specific one) just about sent Pete into a spin. He didn’t like where we were at all, and he tried so hard to hide his disquiet. What could we do?

The snatching lasted well into the night, with Whinchat constantly straining at her mooring lines, making the boat shake and shudder – and squeak and snap against her lines. It was incredibly loud, and I was amazed when Pete fell asleep almost after climbing into bed. I lay awake for a while, listening to the angry sounds, noting that they always seem worst at night.