Today was a shore leave day, to allow me to catch up with myself after my very arduous journey by Airbus320. Actually, it was a good experience, not that expensive, punctual, efficient. Booked via BA, an Iberia flight code, serviced by Veuling. Pete came to meet me at the airport (awwww), and after a short taxi ride into La Coruna, I was back on Whinchat.

She looked amazing, considering her ordeal of the Bay of Biscay. No, let’s be realistic here, she loved it, I’m sure, but the guys weren’t having the best of times. It was a little strange not seeing her yellow horseshoe buoy, along with the dan buoy, but the seas had taken those. The orange replacement, I’m sure I’ll get used to.

Back to Monday night:

After unpacking my bag, we went in search of our evening meal. Pete, having been here for a few days now, had the city mapped out in his mind, with some eateries. However, Monday nights see some places shut altogether. Pete had said it had been a busy weekend, but there was no real evidence of this on Monday evening! Half the open places in the square were empty – but Pete had said that we were out fairly early, around 21:00. I’d forgotten how late the Spanish eat! We settled on a bar, no idea what it was called, or where it was (rubbish information, Julia, mental note to do better), where we had an awesome glass of local wine (from Ria Baixa region) and a massive plate of serano ham. Wonderful! From there we walked a few metres to Alcume (C Galera 44), describing itself as an Argentine style eatery. It was no-frills, the interior like being in a log cabin, with a short menu dedicated to meats! Thankfully our waiter brought us an english translation of the menu (our Spanish is languishing in the rubbish category, but we will progress), and were delighted to learn that Chiperones were baby squid! Yes please! We had salad, the baby squid, an amazing sirloin, served very rare, and a hacked up chicken. Yep, too much food, but it was delicious. We opted for a bottle of Rioja, which wasn’t as good as the local wine we’d had in the tapas bar… Pete reckoned it was perhaps corked, but we weren’t confident enough to go there!

I thought that the slight roll of swell in the marina (there must be some north in it) would disturb me, but no. The forepeak is so comfy, and I had no problem sleeping. In fact, we woke at nearly 10:00 (local)! We never do that! By the time we’d got going, most shops were thinking about shutting, so we knew that this couldn’t be a recipe to follow for the trip! I’m not sure what we did, a couple of boat tasks (like tumble drying the entire contents of two of Pete’s drawers, which had escaped his damp audit), and so we set off for an amble, and lunch.

La Coruna was certainly intent in heading towards its siesta. That always made sense to me on a hot sunny day, but La Coruna’s weather has been decidedly British today. It’s not quite cold, but not warm either, and it’s showered on and off, with a couple of torrential downpours. It is doing its best still to empty the contents from the skies. We wandered through the covered market, with awesome displays of unrecognisable fish (with glistening guts displayed, presumably to indicate freshness), mounds of shellfish, including black crabs. We took a turn around the large supermarket underneath the covered market – most impressive! Certainly loads of potential for the return trip (not that we’re thinking about that yet).

We ended up having lunch in Taberna de Penela on the main square, not buzzing as the guide book said, but quietly just us and one lady diner. The waiter said when we left that this was the worst day that he had experienced. Lunch was super – a hefty salad to begin (ticking off those five a day) and then Pete had squid in black ink with rice – just wonderful – and I had monkfish, Galician style. The monkfish was moist, tender, but I’m not so convinced of the swimming in luminescent oil. That’ll be the paprika in the olive oil, but it wouldn’t be a way I’d choose to serve it. I think I’ll go for grilled in future!

Lunch got washed down by the oddest coffee ever. We thought we’d ordered expresso, but two cups were delivered to the table. Hmmm… And then a bottle of something, with a long spout. Our waiter arrived with a battered old kettle, pouring thick dark liquid from it. “Add some drops of this liquor to it,” he said, “it will enhance the coffee”. I think I over sloshed it, so it didn’t really work. The slightly burnt coffee taste, now had a shudder of alcohol to it. I’m not sure either of us were convinced, but we drank them all the same.

From here, we stepped out into the gloomy day, now showery and before we’d gone five minutes, Pete declared it was ice-cream time! What? I bought him an ice-cream, chocolate, which was divine admittedly, but it wasn’t a move I would have made. We walked to The Tower of Hercules, taking the coastal path. Pete said that on Sunday, in the warm sunshine, it had been busy – obviously promenading was the thing that you do in La Coruna. Not today, in the rain. We were only passed by people intent on exercise – a couple of cyclists and a few more runners. No one else was mad enough to be promenading into driving rain. By the time we had reached the The Tower, we were quite soggy, neither of us knowing how waterproof our shoes were. We dived into an exhibition space about the Tower (actually well curated, in two versions of Spanish and English) to avoid more of a soaking. When we’d judged for the heavy shower to have passed, we scurried out and up the path to the Tower. Once there, we decided that we should complete the visit and head up to the top. Again, well curated, and an interesting way to spend an hour. The climb up was quite steep, and with 200 steps to the top, it was huffing-puffing making – although the various exhibits along the way, made for good respite. I thought it was like interval training – a splurge of activity, and then a rest, and then off again. Pete had said that on Sunday there was a queue snaking down the path; given the narrowness of the staircases, it would have made for a more disrupted and challenging visit. As it was, we almost had the place to ourselves. That suited us, but rather like the waiter in Taberna de Penela, I’m not sure it would have suited those working there. It must’ve seemed a very dull day.

From The Tower of Hercules, Pete led us on a meandering walk back to the supermarket, following the coastal pavement. The geography of La Coruna is that it is on a peninsula, with the Tower being on the headland, with the town stretching out behind it, narrowing, like a waist, so that it is easy to walk in a long loop, heading over the backbone of the town. It would have been much more pleasant had the heaven’s not have opened, rendering us quite sodden. We decided to shelter in a bus stop at one point, realising that we weren’t the only ones. A cyclist, clad in fluorescent green, had done the same. Some ten minutes later we were on our way again, in light rain. A brief stop for tea, and then we were in the supermarket, trying to work out how much we might get away with carrying. As it was, we could have gone for more, but there’s enough for a meal or two, and a glass or two of local wine.

Supper tonight was a remoska special, eventually served at about 21:30, somewhere between Spanish eating time and English. It’s been a day when I have had no real sense of time, not helped by it only falling into dusk around 22:00, but what does that matter? It’s been a great first day of the trip.

Today’s haiku, summed up by a chance glance up at a church:

(the form isn’t great, but Basho was apparently quite unpurist at times)

Photo shows Tower of Hercules, La Coruna (taken by Pete on Sunday when it was sunny) 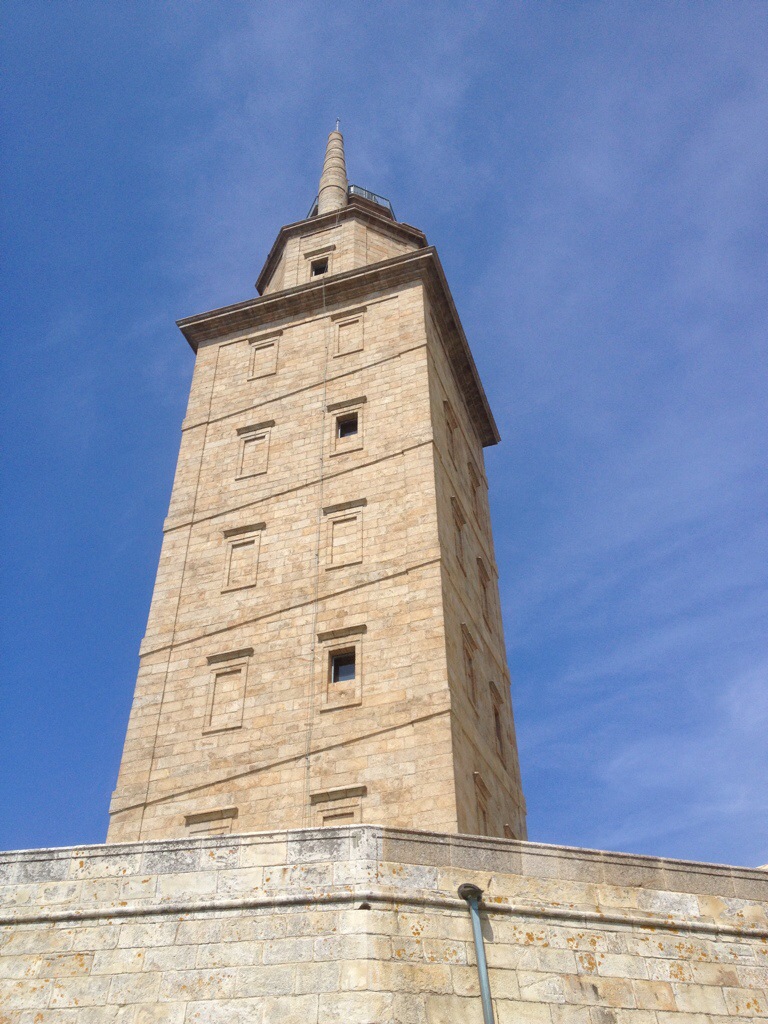