Whoop! Whoop! The sailing plan for the summer has begun! After a mad day yesterday of provisioning, loading, fuelling, watering, Whinchat was good to go. I had the sense that she was straining at her warps to be set free. A winter on a car park in Falmouth, and last summer as a floating holiday cottage seems an indignity for such a creature of the sea. 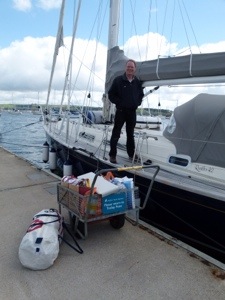 This morning, Simon was on the harbour wall, smoking a fag, when we arrived, theoretically early. Pete had the pre-trip nerves he always gets, and I had an echo of them too. The difference between he and me, is that he is excited by them, whereas they somewhat scare the bejesus out of me. I knew he would be fine as soon as he was on board, and he was. Both Simon and Pete were like sprinters in their blocks. Simon was keen to put some distance between him and his emails, and Pete just needed to feel the first strides to ease into his own race. 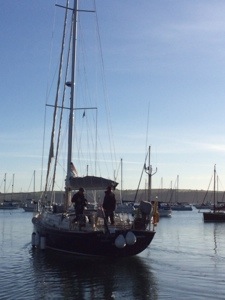 It was the oddest feeling seeing them leave. My beautiful boat, the complete love of my life, setting off into the unknown. At the risk of cliche, there was a veritable cocktail of emotions. Such sadness to see them go, coupled with that, a fleeting moment of envy. Perhaps I could do it? Pride that Pete is setting about to achieve one of his ambitions. All tinged with an overriding edge of worry. What happens if….

I stood on the quay and watched Whinchat glide out through the lines of mooring buoys that I know so well. A sentry of boats saluting her as she eased past, Simon busy doing the crew-related jobs that I do. The lines tied up, stowed in the warps’ locker, the ‘gate’ secured, signalling the time for passage, the fenders untied and stowed in the monster lazarette. Here was someone in my space. And yet, I didn’t want to be there, but there is a ghost of me onboard in every action.

Ah, but let’s not get too romantic here, because when it comes to the cruising chute, we are acquainted, but not really friends. Flip back a day or two, when the boys were supposed to cast off, and it was blowing an almighty hoolie. Simon, probably (the racing demon), had jested that they’d have the cruising chute up by Black Rock (an isolated danger, sitting proud in the Carrick Roads). No way, I’d thought, and laughed it off.

As I watched them haul the mainsail outside the field of moorings, it occurred to me that I could go around to the Point and watch them cross the Bay. I drove through the morning traffic to the ‘scenic’ route that takes you behind the Docks. I’d expected to be able to stop and watch them waft by, but there was no sign of them. Really? In about 15 minutes. I pressed on to the Point. I’d had enough time to drive and to send a message into Chris Evans’ Breakfast Show’s Breaking News (and for it to be aired) before I caught sight of them, the full glory of the kite flying, way before Black Rock. The Mini rocked with my laughter – they’d done it! Brilliant. She looked amazing, and there was no one else to see it. No one to share it with, point her out, glinting in the sparkly sea. I watched them coast past, wondering if they could see me. 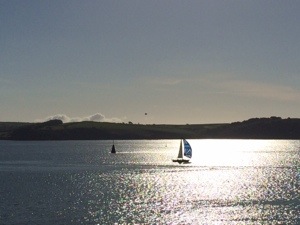 It was hard to tear myself away, but she was sailing well and she’d soon disappeared to a, granted, colourful smidge of herself. It was time to get on with my day… which has involved obsessive reloading of MarineTraffic. I’ve charted the variations in speed, and guessed at the variations in mood. Quick = satisfying. Slow = frustrating. Whinchat seems to be out of range now. 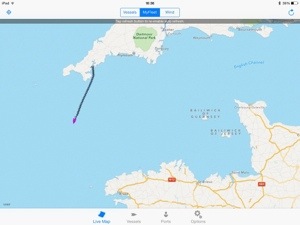 Here, the day is fading, although with the sun/moon cycles they won’t have any real darkness, but I wonder if they’ve eaten the chicken dish I made, or whether it has been a day of crisps and chocolate. Have they seen dolphins? How are they? The watch system will have kicked in now, and from the stability of my dining room table, and a freshly made bed upstairs, I’m OK being here.

sunrise kisses the water
a million diamonds
shiver in delight

2 thoughts on “Whinchat casts off!”