Pete had said that we had a decision point at Bolt Head (at the entrance for Salcombe), whether we would head west for Falmouth, or north-west to Fowey. This decision would be based on the wind strength and direction, because a southerly/southwesterly had been forecast, and we would therefore allow the wind to direct our passage for the ‘best’ sail. We’d lost confidence in the Met Office forecasts over the last couple of days – they were pretty good over the weekend (except wind strength) but there was little accuracy. One thing that had happened was that any fronts had moved across more rapidly than predicted. In fact, we decided before we’d left The Bag, as the inshore waters forecast suggested a front moving in on Friday – with gale force winds. We both agreed that we didn’t want to run into that if it came early, so the Met Office actually decided where we were heading even before we’d untied a single warp.

The weather was really balmy, and a bonfire somewhere on the south bank of the river suggested an easterly air flow – which we were happy to take! Unfortunately someone forgot to tell the wind that it was due to be f3 or f4, because it only just about managed a f2. This would have been fine for a gentle drift, but given the passage we needed to make, we decided that we would motor. Shame! The trip had all the hallmarks of being a beat east and motoring the entire way back.

As we headed out past Salcombe, looking out to the open sea, we could see breakers on the surface – which sent Pete scurrying down below to check his tidal calculations. All good, and the breakers were where the channel was marked, before getting to the narrow passage to get past the bar. It was quite striking, and we both commented that any photo would not do it justice.

So, we vaguely set up a watch system, with me doing a long stretch to the Eddystone Lighthouse, as Pete tried a couple of sodukus. It was a long 15NM watch, with these long languid rollers, a couple of meters, which saw us sinking up and down, quite gently, but quite a bit of movement. Such a shame that there was to little wind to drive us through it… but at least the sun was shining, the sea was a beautiful blue and the sunlight casting a million sparkles across the water was just breathtaking.

There were very few boats out on the water, a couple of fishing boats near the lighthouse (photo below, a feat of Victorian building prowess), but not a lot! I was determined to see us to the way point at Eddystone, and sometime after 13:30 we made it, so I went down below to make lunch. It had gone particularly ‘swelly’, presumably due to the change in topography of the sea bed, shallowing – hence the need for a lighthouse! The motion really disturbs me, not that it made me feel sick, and I can’t even say queasy, but just all discombobulated. With lunch plated up, back up on board to the fresh air, not that it stopped me eating! However, with lunch in my belly, I wedged myself in the sun in the cockpit for a long snooze. That sorted me out!

The wind tried to build, and we hoisted the yankee and managed to sail for a while, a half-hearted beam reach. When our speed dropped to below four knots, it was time again for the engine. I wanted to moor up in daylight!

When we finally rounded St Anthony’s Head and into the Carrick Roads we were both taken how simply stunning it was. The sea had flattened out to a lovely easy calm, there was a little bit of breeze. A small fleet of yachts were racing in St Mawes, the sun was casting warm light on the land, and it was wonderful. Pete looked at me, half worried because he knew I wanted to be back, but he really wanted to sail ‘home’. On such a beautiful evening, who was I to refuse him? I think it was one of the highlights of the trip. We’ve been to some lovely places, but the Carrick Roads are magnificent… and it’s now where we live! How lucky are we? We both arrived in Mylor with big grins; we were home, but really, how bad is that? 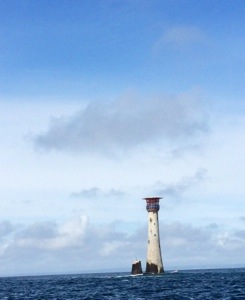