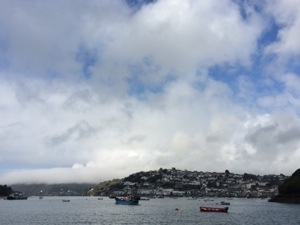 We decided that we’d have a day off of big boats to enjoy what Salcombe and the surrounds had to offer. Pete had spotted an advert in the harbour guide for a pub up the river, accessible at high tide in the dinghy, and as high tide would coincide with a lunchtime visit… well, he said it would be rude not to!

However, the weather this morning made it look like it would be no day to do anything very much, as it was miserable, presumably some muckly occluding front passing over, as it was just wild out there! Pete decided that he wanted a paper, and I stayed back to do boat cleaning – well, we do have a journalist on board next week (weather permitting). I also had a friend’s essay to review and comment, and I wanted to get this done and back to her.

The weather gods were smiling on us, because the wind dropped and the rains dissipated, so we were good to head upstream in search of The Globe pub – and a wifi connection to send off the comments. We took the dinghy, and both perched on the tubes, we motored up the river. It took about 30 minutes, and it was thoroughly pleasant. Low rolling hills flank the river, mostly farmland, with one or two striking houses, until you reach the village of Frogmore. The Globe was a good spot for lunch, quite a cavernous pub, but very friendly service and a lovely lunch – Pete had a steak burger and I had fishcakes. We’d go back, if ever we were around!

Having despatched some emails, we headed back down the river, slightly wary about getting stranded by a disappearing tide, but it was all good. We went straight on to Salcombe, for retail purposes (a piece of hosepipe for Pete and some summery clothes for me), so Salcombe served me well today given the balance of clothing shops spied yesterday!

Tonight we will take the water taxi for dinner ashore, Boatswain’s Brasserie, as recommended by our friend Nicki. That’s one of the great shames of being in Salcombe – our friends are out of town! We could have planned it better, but that’s always hard when you’re trying to make the best of the weather… Next time Nicki, we promise!