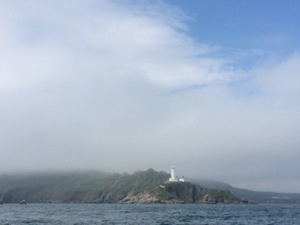 Dittisham to Salcombe, “The Bag”

Wind – none to speak of, perhaps vaguely from the south-west, with smooth seas
20NM

It was a no alarm day, in view of the rather long day on the water on Monday, which I later learned put us at a distinct tidal disadvantage when it came to rounding Start Point. We were heading back west, having felt rather pleased with ourselves for getting as far east as we did given the headwinds all the way!

The forecast was for SE backing SW, and I was hoping for more east, because I really did not want to have another day beating to windward. Well, the latter never happened!

We slipped our mooring at a little after 10:00, with the Harbour Master chasing us down the river for payment. No one had been to collect a mooring fee from us, and from what we could glean, it was a free weekend for most boaters too! The main man didn’t look too impressed, and we certainly have no objection to paying what’s due. As we headed out into the mouth of the river Dart, there was no evidence of any wind, in fact a little sailing dinghy was drifting backwards and forwards across the water. Where was the wind?

The sea ahead was quite oily in ‘texture’, a kind of glassy grey. This did not bode well for any wind, and as we motored out of the harbour into Start Bay, there was a wall of thick grey on the horizon. No wind meant the metal sail was in operation all day, with AutoDoris doing the helming, because the wall of grey turned out to be very heavy rain. Pete and I tucked ourselves under the sprayhood and maintained watch from the shelter of the rain. One of the advantages of not looking at the chart plotter was that I couldn’t really assess our progress, and it was here that Pete announced that we were not making very good progress as we were plugging the tide. Ah well.

One of the advantages of not being welded to the helm, coupled with flat conditions is that you can make passage quite close to the coastline, and it’s such wonderful coastline to gaze at. Great granite cliffs, all rugged and battered by the elements. The photo above shows Start Point. It was really quite spectacular, and I felt so grateful that we live in a stunning part of the world. What’s not to like even on a day when you’re motoring? Well, I’ll tell you. The fickleness of the wind was such that when we came across the Bar at the mouth of the river, the wind arrived, and then blew up behind us. Typical. Pete had wanted to be across by 15:00, I think, so that there was enough water, and that was all very successful. The odd thing about the Salcombe approach was that the leading lines take you in, but not at the deepest water. Presumably not really designed for sailing boats with any draught! The channel beyond the entrance is well marked, but crossing the bar, it struck me that there was a surprising lack of aids to navigation. We always have reference to the chart plotter, and in new places, the charts and pilot book. Anyway, I digress. Once in, with a freshening south-westerly, we had the task of mooring ahead.

I had a nightmare trying to catch a mooring buoy. There were many to chose from, which always makes for a challenge, like an empty car park. The yellow buoys are marked with an LOA, so the first one we went for was for 11m maximum, so that attempt was aborted. The next one, well, the sea was running in, the wind was charging down, and the sea in the harbour was surprisingly lumpy. Pete managed to get a good approach, but the tide meant that the buoy was racing backwards, so I was trying to snatch the hook on top of the buoy, watching the buoy, whilst walking back down the deck… not looking where I was going, which is always disastrous on a boat. So, rather unsurprisingly, I hit the deck with a crunch, and the boat hook flew into the water. I’d tied it on, so I could recover it, but it was now wet, slippery, so it took several stabs before I had the device on. All good, except a smarting hand and a throbbing knee. It was too far from the deck for Pete to secure the mooring strop, so we had to deploy the dinghy, all the time bouncing up and down on this mooring. It didn’t bode well, really. I did not want to go down below, so whilst I recovered (in the rain), Pete made a scratch lunch – actually, it was very good – and we decided to head into Salcombe. I’d never been here!!

It’s a very pretty town, and the golden sandy beaches around the harbour make for an idyllic setting. You can imagine it heaving with families in the summer – a sort of Home Counties by the sea by all accounts! We weren’t sure that it would deliver the re-provisioning that we needed, as the number of designer and clothing shops far outweighed anything ‘useful’ to us. However, we found an excellent butcher, as well as a little grocers selling vegetables. An ice-cream each and that completed our excursion to Salcombe.

Whinchat was still being chucked up and down on the mooring, so we decided that we’d abandon it and head upstream to “The Bag”, and the visitors pontoon. It is tucked behind a little headland, and the waters looked calmer… and it was! There were a number of boats on the pontoon, but none with any obvious signs of life. We were to have it to ourselves, well, us and the sheep and lambs on one side of the river, and cows on the other! Better than a rocking and rolling mooring.

Were we ever glad to have moved, as the wind really whipped up in the night. It was miserable weather, listening to the rain on the coach roof and the wind howling through the rigging… thank goodness we didn’t have to contend with the bouncing of the sea too.