You wouldn’t think that it would take so long to reach Dittisham, or Start Point for that matter, but our journey today took a full working day, 8.5 hours. We started off with an alarm call so that I could hear the inshore waters forecast. Not so bad, potentially, especially if the wind was more E than SE, and the wind strength wasn’t so bad either, f4-5, and the seas were to be smooth or slight. All of that was not strictly accurate.

We slipped out of the Yealm around 09:00 to very calm conditions, not much evidence of the wind at all, but it was soon apparent that it was around somewhere. Great lumpy seas out in Wembury Bay, and when you have no sails up, it’s just the engine trying to drive the boat through the water, slam, up, slam, down. The seas were rolling in with great frequency, again, so it was wholly unpleasant. The wind strength was more than expected, so Pete hauled a reefed main, and deployed the staysail. This crucified him, making him overheat, and I thought succumb to seasickness within half an hour of departing, but he’d just got too hot. We were, of course, beating into the wind again. There was no leniency for us, the wind was wholly SE with the S not letting go pretty much all day. This was exactly the course we wanted to take to get around Start Point, and so it was a day of some long old tacks.

The motion of the sea was hard work. I will say it again, but I don’t do fairground rides. The quote of the day has to go to me… “I feel like I’ve been over a thousand humped back bridges” Yuck.
Actually, I didn’t feel queasy at all today, but that might have something to do with me not releasing the helm. I helmed a straight six hours, not once taking my hands from the wheel. Self-preservation, although when I did come off it, I was dog tired, and after making lunch (the seas were calmer by then as the wind had died) I had to have a nap.

It was another day with many sail configurations. We simply didn’t have enough sail out to punch through the waves, so the staysail was tucked away, and the yankee launched. More grinding of the winches for Pete. It made a massive difference, and we had a better motion through the sea, but it was still a punishing motion… and we had hours ahead, I just knew. It was a bit “Dory Fish” equivalent – just keep swimming. Just keep sailing. My job was to sail as close to the wind as I could, and not get bounced around by the waves too much. In the stronger winds of earlier, it was very physical work. I can’t honestly say how time passed, no watch helped, and with the slow progress, it was probably wise! I was just watching the coast and the seas and the wind-dial. It was an immense relief to make the first tack, partly because it indicates progress (a decision!) but because we were on a starboard tack and Whinchat sails so much better on starboard (to windward) and we were sailing across the direction of the sea and not into it. No more being knocked by waves head on, somehow when they come across you, almost underneath you, it’s better. This was the best point of the day, sailing wise.

Back on port tack, and somewhere approaching the French border (I jest, but even Pete commented on it), we had to deal with two fishing boats. One was on AIS, and the other not (naughty, naughty). We changed course for one, and the second altered course for us. Certainly a note of drama in the day! The wind was starting to drop, so Pete shook out the reef in the main (read more winching and grinding). He looked totally shot, so I suggested that he take a nap. Perhaps that came a bit later, as we were definitely back on starboard tack by then, because he lay out in the cockpit, and the wind continued to die off, and I wanted to deploy the staysail, giving us as much canvas as possible, and I had to disturb him to do it.

The wind just gradually died off, and I was then handling difficult sailing conditions for other reasons – too little wind. The seas had abated, but we were still bouncing around, making the holding of a course challenging. This was immensely frustrating, and I’d done such a great job of pinching the wind for about five miles, and then the wind left me meaning that I just couldn’t hold a course, sending us towards the rocks off Start Point. I could’ve screamed at the weather at that point, because it had been such hard work, and the decision point was to tack (on to port, slower and therefore even more frustrating) or deploy the metal sail and get going. I was not going to tack, so it was the engine. Pete later said that he was surprised that I hadn’t ‘given in’ earlier – well, I actually had a lot vested in it.

It’s always a depressing moment to put on the engine, because it is a kind of defeat. Pete might still be out there, wafting across Start Bay, but I was shattered, hungry and had an overwhelming urge to be near land! After six hours, I released the helm to Pete, having got us around Start Point. Food was my next need, and so I offered to make lunch. It was a good call, even if it was a little bit tippy and a little bit bouncy. It was worth it. Within about five minutes of eating the Jules wrap specials, I’d wedged myself in the sun and shut my eyes for 40 winks… Lovely. I drifted off somewhere very pleasant, and woke as we were approaching Dartmouth.

We are truly blessed by some of the landscapes in the UK, and there is a whole different beauty when you approach from the sea – particularly, somehow, if you’ve had a bruising ride. Why do I do this sailing lark? Well, it’s partly because it’s testing, growthful and immensely satisfying. Partly because the person I adore above all else loves it. But mostly because of the places that it gets you and the views you have. The view of Dartmouth appearing through the bold mouth of the river was astonishing. By now the sun was out in full force, the water was true blue and the steep banks of the river climb down to meet the sea. What’s not to love about that and forgive the elements for bouncing you around? We could have pulled in at Dartmouth – so much space – but we wanted to explore further up the Dart to Dittisham (pronounced Ditsham by the locals). What a reward! The views from Whinchat were gorgeous. Steep tree-lined slopes, with fewer and fewer houses. We heard the sound of the steam train from behind us, and saw wisps of steam through the trees showing us where she was. Dittisham is a very pretty village, perched on the side of the river, as it bends around and gently winds onwards. We picked up a mooring (brilliantly, again) and have views that cannot easily beaten. It is quiet, so still and right now, as the light of the day has faded, there is the sound of owls in the trees. Yes, I’m still rocking and rolling at my keyboard, and I am so bone tired that I cannot stay awake much longer (a very un rock ‘n’ roll 21:30). We’ve had a great pub meal in the Ferry Boat Inn, where we digested the day and thought about the plans for tomorrow. 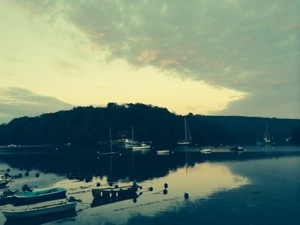