No alarm clock this morning saw us wake at 08:00 = a very good sleep. Waking up to a lack of boat heating was less fun! Getting dressed after a hot shower was even lower on the scale of boating highlights! Everything seemed damp, and cold. The weather forecast that we’d had on Saturday wasn’t great for today, and it was with some surprise when Pete said that he just wanted to get going instead of having bacon for breakfast. Where were we going?

I was very reluctant to untie anything until we’d heard a weather forecast, very reasonably, so we got a sort of one from the Harbour Master, who assured us he remembered it properly – N 3 or 4, didn’t sound so bad. We were about to pay for an hour of wifi before we saw him, and in any event, in preparing Whinchat for the sea, we heard the Met Office Inshore Waters forecast on Channel 16 – which always makes me feel better about things. It was better than had been forecast yesterday, even though there was a strong wind warning. NE veering E 4 or 5 occasionally 6. That was liveable with – especially with a little prayer for more N than E… as we were still planning on heading east.

We’d slipped our mooring shortly after the weather forecast, and within about five minutes our Skipper had the mainsail up, and was sailing out of the river, at a rate of knots. The yankee followed soon after, and then somehow I was on the helm, ah yes, Pete had to go and tie down the dinghy (stowed on the coach roof). “I think we’re a bit over canvassed”, says I, as we are steaming in excess of 9 knots in winds that are now 27 knots, scurrying through the water. That wasn’t forecast! So, we reefed the main, but there was still too much sail out, so the yankee went away. It was mental! The whole ride today was around 8 knots, sometimes a little less, but sometimes a little more.

I was still on the helm, enjoying the ride. The sea was so much kinder than yesterday. The north in the wind meant that the fetch was less, and therefore just less sea to move around or pile up to the same degree. No chop, just some curling little waves. Enough to get yours truly dunked occasionally, as they were coming across the port beam. It was the third time that it got me that I’d really had enough. My cap had been lifted by a gust of wind, clipped on at the back so it didn’t take off (like Pete’s third and last Pendennis Cup cap), and I was just reaching to pull it back on my head when I was caught by a rogue wave. BLAM! Hair, inside my collar, all wet. I yelled at the sea, quite hard. I decided that it was Pete’s turn to go on the helm, so what did he do? Put AutoDoris on!!

We had just about every sail configuration going on today, because when I came off the helm, the wind dropped, and Pete was debating whether to add some more sail. I suggested the StaySail, and so it was. Just the job. The wind was gradually dying throughout the passage, no bad thing when you begin with a f7! There was also more east edging into it, and that was more concern. I really didn’t fancy beating again after yesterday’s passage to Fowey, The winds were feeling generous, and although there was some east, it wasn’t so bad, and never on the nose, so we were sailing a beam reach for some of the passage, and about 45deg for the remainder, according to my Day Skipper instructor, this is sailing “full and by”. Soon, the StaySail wasn’t enough, so we shook out the reef on the main, and then deployed the Yankee. We hardly lost speed at all, Whinchat was again amazing.

The weather was very gloomy today – no photos again, partly because it was grey and rainy for a lot of the time. The land went in and out of sight, depending on the severity of the downpours. I have to say, as much as I like to be on the helm, in rain, I’m happy to let AutoDoris do the work (and Pete certainly is). There were no other boats in view for most of the passage, people had more sense! Eating roast lamb and pigging out on chocolate Easter eggs presumably! We did see a few boats as we crossed the mouth of the Tamar at Plymouth, including a trip boat. Madder fools!

We had two options today for passage, Plymouth or the River Yealm. Both of us love the Yealm, and so it was number one choice, but it’s limited around low tide for us with a bar to navigate. Earlier today Pete had called that 14:15 was his cut-off time, when he was comfortable that there would be 3m of water to get us through the navigational hazards. We were making great time, and when we were approaching the decision point of Rame Head, Pete went down below to check the tidal calculations. He conceded that we could go to 15:00. It was about 14:15 when we dropped the sails and motored through the narrow channel. In fact, I didn’t see the depth gauge drop below 3.4m, so there was ‘plenty’. We had the choice of tying up on the visitor’s pontoon, or picking up a buoy. We opted for a buoy, which we’re technically a bit long for, but the Harbour Master was cool about it. Since we’ve tied up, it has poured with rain and neither of us felt like going ashore… even though it’s such a lovely little spot and there’s a great pub in Noss Mayo. We are wimps!

In fact, I decided that I’d try and look for the part in the Eberspacher (??), only I hadn’t realised that you couldn’t actually see it! It was all by contortionist positions to get your hand in to work it out – all by feel. We needed a combination of the two of us, because I could reach my hand into the machine (blind, as it’s behind the Whisper Generator), but my arms were too short to do very much! I managed to get a screw driver in, but knocked the piece even further into the casing. Pete in thinking more clearly, I believe, was able to use a tool to remove the glow plug (whatever that is) and replace the new one. The risk was whether to fire up the heating with a rogue piece of metal in it – would it matter? Well, let’s just say the towels are now dry, and I’ve taken off my fleecey hat and foulie trousers, and I’m no longer freezing. All good. Except it’s still raining, very hard, so we won’t be going to the pub. Best open Whinchat’s bar! 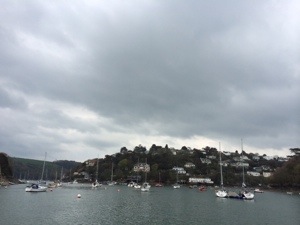 2 thoughts on “Fowey to River Yealm”