No wind becoming  SW3 with glassy seas and slight swell

Today’s trip was the last of the tidal races, and the reverse of the one when the engine failed.  Both of us were slightly anxious, but for no other reason than being the same waters.  Neither of us had worried much since it has all settled down!We woke to very calm conditions.  All flags were hanging limply, evidence of no wind.  We were under mist, which Pete had said had been thicker earlier.  Our night’s sleep had been disturbed by a badly squeaking mooring line, on the bow, right where our heads lie to sleep.  Pete got up at 06:00 to investigate – I offered – and came back to bed saying that we’d need to relay a couple of lines to make the noise stop.  We have two warps with rubber shock absorbers which ease the snatching and stretching as the boat moves – even when tied to the shore.  These are best on the bow and the stern, but we’d used one as a spring, so the bow had a mooring warp with no absorption capability… Hence the squeak, or SQUEAK, each time Whinchat moved.  At 07:00 he got up again, and changed the lines around.  Ah, that’s better!  And so passed another two hours of lovely sleeping!

Pete had calculated that we had to leave Camaret at 12:40, in order to meet the best tidal conditions for going through the Chenel du Four.  There wasn’t much wind, so we knew that we could be reasonably accurate with the speed under engine.

Just as we were preparing to depart, a large white dog, alsatian sized, brushed past me, turning in circles and watching a boat with a dog on it leaving the harbour.  I thought that it was perhaps just eyeing the other hound.  Nope. The boat was circling back, with a woman on the deck waving a boat hook.  They were preparing to return to the breakwater as they’d forgotten the dog!  I couldn’t believe it!  The white dog is getting all excited.  The boat was approaching at speed, and I was more worried that they might mount our stern, so I went to help – or make sure they didn’t.  As they came alongside, to be fair to them, at a reasonable pace, the lady was still waving the boathook.  I wondered if she would hook me, but instead, I grabbed their rails and held the boat alongside.  With about a metre or two to go, the white dog went to leap aboard, but with a shrill from the lady it stopped… only for the dog on board to leap ashore.  So, I have two dogs around my legs as I’m holding onto their boat.  “Merci!” they are crying to me, “Zaaank you!” Both dogs jump aboard, and they reverse out of harbour, presumably with everyone on board.

We departed bang on time, unusually just letting all the mooring lines go, as Pete wandered back to get on board.  No wind, you see.  We motored out of the harbour, just as the sun was burning through all the fog, meaning that we experienced really eerie conditions.  The coastline is dramatic anyway, with sea stacks and little rocky outcrops, but under mist, with glassy seas it was wonderful.  When we’d sailed south, we’d sailed with the flotilla for the Brest Festival, and looking south today, with the topography of the coastline, it looked a bit like Halong Bay, Vietnam.

We arrived at the Vieux Moines three minutes ahead of schedule!  Pete was a little disappointed! 😉 This was the buoy on the way down, with engine failure and me sailing that Pete said I couldn’t go the other side of.  Today, at low tide, you could see why!  Rocks everywhere! The tide was ripping in our favour, and it would carry us for a good few hours, at 8-9 knots over the ground. 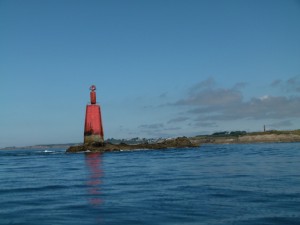 On the way down, Pete had his nose in an engine, and I was focusing on the navigational markers, so neither of us took much notice of the coastline!  We had plenty of opportunity going northwards.  It’s beautiful, I think the nicest coastline of the trip, from Camaret to L’aber-wrac’h.  The coastline flattens as you go south, and the number of long sandy beaches increases, but I love a dramatic landscape.

The mist was steadily lifting, and a sea breeze was beginning to kick in, which had given us a chance to sail.  Not for very long, but it was an hour, probably less.  More than I’d expected to at any rate.

It’s nice to be going somewhere that has some familiarity – I guess like Cameret.  We knew when we could drop the mainsail, giving us enough time to prepare the boat for mooring.  We were met by a dory, and the guy was going to put us on a catway, but the “eh? Catway?!” shock in my voice registered, as he agreed we were too long, so we’ve been put on the pontoons with the fishing boats.  It is away from the main marina, and gives a very different feel.  We look over the river, rolling hills, and not at a mass of white hulled boats.

We ate out last night, in the pub that we’d liked before.  It has an amazing wine list!  Pete was astonished.  Bizarrely, I had a beef curry – I was off seafood – and didn’t want the rabbit (Pete had that).  And so, our last night in France, for tomorrow we set sail (or motor) for England’s green and pleasant land. 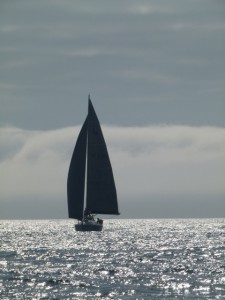 PS I have some photos, but the connection is too slow, so there will be an update as soon as I get decent bandwidth.