The return north through the Raz du Seine is still all about timing, and thankfully, it didn’t mean trying to make a 15 minute window at 03:35, but required a stately departure at 09:50.  That’s fine.  Actually, I could have left earlier, given the roly poly nature of the night!

We’d hauled the mainsail on the mooring, so were good to go into the breathes of wind that were forecast.  We motored for a while, joining the flotilla of boats that had left ahead of us, and those that loomed in the murk around us.  As Pete had pointed out, we were heading north, and so it shouldn’t be any surprise that we were in our foulie trousers, with rain and mist flapping around.

Before too long, there was just about enough wind to sail; actually pretty decently, to the point that Pete wasn’t happy with my sail trimming (eventually it sinks in) as we didn’t need any more speed!!!  Pete said that the tide was with us, so the SOG was probably higher than the speed gauge was showing (not high), but I didn’t know.  It wasn’t a day when I was on the helm.  The sea had eased down, so that it was slight, with the occasional swelly bit.  Nothing that would hold us back.

We sailed a fair amount today; I hadn’t expected to sail at all really.  Not that we were going very quickly!  Anyway.  In the attempts to make the tidal gate, we were there five minutes early!  Dammit!  Just about the point the wind had decided to fade on us, and we were flailing about in the sea.  My most miserable point of the day!  Pete, oh he with tireless ability to endure the most hopeless of winds, persisted, ignoring the sighs from his wife.  We were back in the slow game – from the not-really-moving game!  With about 12 knots from behind us, Pete had decided that he wanted to ‘play’….  Hmmmm..  I feared the cruising chute at first, but knew this wasn’t a downwind sail.  No, he wanted to try to pole out the yankee.  He’d done it before, crossing from Scotland last year and it was successful.  Who was I to refuse?  I was even quite helpful in some of the tactics – even suggesting a modification that would take the yankee sheet off the rails.  Don’t ask me to explain the rigging, but it seemed to take an age, but I have to concede that it did add a half knot to our speed – and when it’s so low, it’s to be taken.  The point was that Pete was as happy as can be… See.. 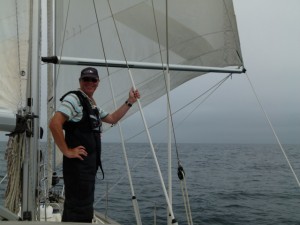 Pete had deployed Doris to hold the course, which she did, at great slowness for two hours.  Pete had a great day at sea today, unlike yesterday, which he found very irritating.  Each has its own rhythm, own learning.  It depends what you look for, perhaps.

And so, we were heading towards Cameret.  The last time we approached, we were so stressed because of the engine failure.  We’d had a plan to anchor, but with us having a disturbed night, we were both sensitive to the anchoring field.  As we approached, there were a few boats at anchor, but all rolling a bit.  We weren’t convinced.  So, in a flash, I’d rigged the boat to raft in the harbour.  Bearing in mind that last time we were there, they were rafting out.  However, we came into the harbour and there were a couple of spaces! Amazing! We had a slight complication with mooring.  The dinghy was trying to moor alongside before we did!!  Thankfully, someone kicked it out of the way so that I could leap ashore and get the lines on.  All good.  In fact, the person ahead of us was just leaving, so we snuck in a little more, almost to the same place that we were in a month ago….  Funny.

We headed into town to restock on wine and buy a couple of gifts.  Cameret is a good port, and will always have a place in my memory as a place of refuge!

We’re thinking about the trip homewards, and will go via Scilies.  At the suggestion of our friends on Little Dove, we will meet them there.  Early to leave France, perhaps, but the weather will turn at the end of next week anyway.  And to end in the company of friends, what can be better?

In the process of negotiations on departure, I think I’ve agreed to a night passage.  I’m not sure that’s my first choice, but I get it.  It’ll be character building – but at one level, after never having a good experience of night sailing, perhaps I’ve earned one….