SSE F4-5 to nothing! Seas all about the swell – around 3m at times

Woo-hoo! We’re good to go!  Both of us were very relieved to be on the move, but the omens were good.  I’d had an email from Elisabeth saying that none of the 13 were sea-sick the day before, and that the swell had been under 2m.  The sun was shining in Concarneau, the seas were returned to blue, and it looked really inviting.  Pete was a bit overzealous to get sailing; when we poked our nose out from the breakwater, it was a cracking wind.  Pete was all for hauling the mainsail when we were out of the harbour, which proved to be immensely stressful for me.  The cockpit was full of fenders and mooring warps in a bundle, Pete having handed the helm to me to steer us in the wind.  He’d told me ease off the power, because of rocks and mooring buoys.  I set Doris to hold us, under tick over, and began to sweat the halyard.  Doris is beeping.  Pete yells at me to take over on the helm, as Doris has no ‘way’.  I stumble on the fenders, as Pete’s shouting for me to be quick. Grrrrrrrrr….. I felt better when I’d sworn a bit, but all was fine.  Pete was sailing out of the harbour, following a flotilla of other boats.  Pete was kind enough to give me first helm, as I’d been hassled.  A smile only coming to my face, when he’d come back to the helm to hand me my life-jacket,  only to get completely dunked by a wave…. It would have got me, had he not been there at that precise moment.  Smile?  I laughed!

The wind was on the beam, 18 knots apparent, and we were just cruising along.  It was really exhilarating.  Pete was on look out, telling me where to dodge pot buoys, or calling when other boats were around.  Pete’s log says that I was on the helm for a little over an hour, perhaps 90 minutes.  The sea in this time was lively, but nothing that Whinchat or me, come to that, couldn’t handle.  A rolling swell from the west, so we were heading into it a bit.  I’d decided that I was going to hand over to Pete at a waypoint through the channel, and duly did.  At that point, the wind totally died.  Actually, first it tried to come from another direction, which meant that Pete accidentally tacked, and then it just went ‘phooph’ and disappeared.  Engine deployed, and that was it for the day.  Grumpy husband, and me with a tinge of guilt for having a really cracking session on the helm!  So, it all became a bit hard work.  As we rounded the Penmarch peninsula, the swell increased.  Quite an extraordinary experience.  Pete had made lunch – a hastily assembled sandwich – and survived, at a time when there was no way I was ready to go down below.  And then, the swell increases and increases.  We were moving across the swell on this course, so at least we weren’t riding over it.  The contrast to the journey south is incredible.  We were also under motor, but the sea was so smooth, so glassy.  This time, the sea was in constant motion.  Nothing like our friends on Peat Smoke will have encountered on their globe trotting (by boat), but seeing a wall of slowly moving water coming at you.  Three metres, ten feet, and my mind is telling me that it’s going to bury us, and then Whinchat just glides with it, and it passes under us.  Incredible.  I didn’t feel in the remotest scared, queasy, any of those things I would have put on a post-it before hand!  Our boat is just amazing.  I learned something today too.  I can do fairly arduous seas – with enough time for sea legs.  At some point, during the swelly stuff, I even pumped out the black water tanks.  I impressed myself!

Most of the time that we were rolling through the sea, we had a rule for two hands on the boat.  Usually, it’s one hand, but because the seas were big, and a bit unpredictable, it was two hands.  Sitting, or standing, two hands welded to the boat.  Whinchat was really rolling!

I was standing on the cockpit seats, looking out to sea, when I saw something breaking on the swell.  Was that a fin?  Was that more than one fin?  Oh my!  I let out the familiar cry of “dollllllllllpppppppppppiiiiiiiinnnnnss”!  How excited was I? Were we?  There must have been about 20 dolphins, several swells away, charging towards something.  We shouted at them to come to us, but no, they were on a mission, and passed us by.  I took photos, but nothing really shows.  Perhaps it shows the swell.  The photo below shows what we were in, and it’s not the horizon. You can’t see it.  It’s a picture taken horizontally, with the swell looming.  The breaking water in the bottom of the photo is our wake.  And no, no dolphins visible! I wish I’d taken it with a boat there.  We hardly ever saw a complete boat – most times a boat buried to 2/3 mast height, or held above, I suppose…. 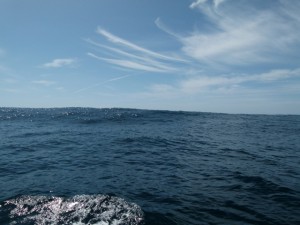 So, given all this swell, this sea, Pete’s mood changes from slightly grumpy to anxious.  Will the place we’re going to be a good place to rest?  Will there be enough protection.  I don’t think he enjoyed very much about the day at all.  We approached Ste Evette, a place I know we’d visited before, but couldn’t place (and remembered why when we got there, unremarkable).  The breakwater did give some shelter from the swell, by now only 1.5m,  and it felt good to be in sheltered water.  We decided to pick up a mooring buoy, as there was one free.  Minor stress.  The boat hook was accessible, but I had to dig out of the lazerette to find the magic mooring device.  Cursing, cursing, cursing.  A party of people on a French boat had appeared to watch me unearth something, and then stride to the bow to secure the line, attach it to the boat hook and then spike the mooring buoy perfectly.  I was given a round of applause, to which I bowed, theatrically.  Then the hard work, Pete in the dingy, in the slight motion of the sea trying to secure the mooring strop.  All fine. We were out of the big stuff, and in nothing in comparison.

We cooked, ate on deck (in sunshine) in a slight motion.  Nothing too bad.  We went to bed, but about 01:00 I awoke, really hot and conscious of the bouncing around.  The swell had shifted, and the protection of the breakwater now wasn’t as it was.  And so another disturbed sleep.  I moved to the middle of the boat, making a camp bed, and drifted back to sleep, but it wasn’t the best.  By morning, I was tiring of the motion, and ready to go back to sea, to move through it, whatever that might be….