Today our aim was to head for an anchorage. Pete has had his heart set on visiting a little cluster of islands, the Glenans, and we thought that this might be the day to do it. The weather Gods, however, had other ideas. It’s my role, or one that I have taken, to get the weather. In port, this is a photo on the iPhone, which gives details of winds, sea state (wind sea) and swell). All ports provide weather forecasts, and, like in the UK, use different sources. This is the national weather service, but my favourite has been from a weather consultancy, MeteoConsult. They rather interestingly (!) give a confidence level on their forecast. Today’s was only 80%. Anyway, I digress! 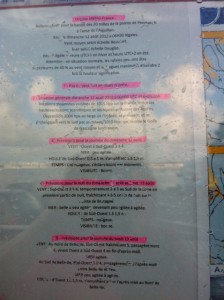 We slipped our mooring at about 10:00, with no great drama, having thoroughly enjoyed our stay in Port Louis. Pete had called that the wind was perfect for hauling the main on the way out of port, so we had raised the main before stowing the fenders and warps… Most unheard of! Pete seemed determined to sail today, and as we exited the channel from Lorient, we were treated to a good breeze…. From not quite as helpful a direction as it might have been! West?! Bang on the nose, so we joined a flotilla of yachts short tacking out of the channel. Yours truly on winch duty, so a bit of heart pumping for a change. Pete was helming for the first bit, but was getting increasingly frustrated. He didn’t think that Whinchat was sailing as well as she could, and couldn’t work out why. I blamed a foul tide, but Pete said that wasn’t the case. There was a fair amount of swell around, so the rolling movement of the sea can’t have helped us. It was almost unpleasant, but not quite. Pete had had enough, so asked me if I could make us sail any better. Apparently I did. Pete said that I did really well. I held the course, and pinched the wind as much as I could, but also came off the wind too to give us a bit of drive.

It wasn’t hard work, as there wasn’t really enough wind to drive us through the motion of the sea. At 12knots apparent, then it’s just not enough, and we were overtaken by all sorts of boats – including an Irish boat flying the Royal Cork ensign (update – I saw them the following morning in port, and said that we’d seen them tear past us yesterday, which had depressed Pete. They told me they had the engine on! I knew it!). It didn’t bother me, but I knew that it was troubling Pete. I helmed for two straight hours, edging us slowly further away from the Isle de Groix. Pete made a sandwich for lunch (we’d stocked up on the amazing rye bread), but we were in particularly turbulent seas, so he emerged a little green at the gills. He recovered soon enough, but it’s a horrid feeling – on top of frustration of boat performance. I think that you might say that it wasn’t Pete’s best day at sea.

The speed indicator – the through the water display – had been reading “0” all morning, which doesn’t matter, but it’s irritating. Pete had to clean it out somewhere recently, where he found a whole load of small prawn-like creatures living in it! After three nights in port, we wondered what might have moved in. Anyway, our wind was only showing apparent. Again, not that it matters really. Suddenly the speed reappeared! It brought a cheer from me. The wind had gradually been edging, and then suddenly took a significant variation, along with an increase in force. Eh? I was really confused, but we were expecting a SW, so it was welcome. Then I settled back a bit on the original course. Pete took back the helm – I was feeling confident that he wouldn’t get irritated again, as we could hold a course OK – and on closer examination of the wind gauge, we’d been sailing true! No wonder our speed was so rubbish, for a short while, I’d been sailing very, very close to the wind. Pete had been trimming the sails, so there wasn’t much left for Whinchat to do. Imagine how she was when she was released from being pinned against the wind… She took off! Heh! Pete was smiling again; and that’s priceless. The wind being on ‘true’ wouldn’t have affected our performance earlier in the morning, so we can’t blame that. I’m not sure we’ve really worked out what wasn’t happening, and we should be able to. Pete had abandoned ideas of anchoring in the islands, due to the weather forecast, but Plan B was to head for a little bay near Concarneau. We pretty much sailed up to the bay, and saw loads of boats in there. All on mooring buoys. Pete had expected this, as the book tells you, at neaps (which we’re at), that you can go inside the buoys and anchor there. This may have been true at one point in time, but many more moorings must have been laid since the book was written, and there looked barely space for a RIB! There was someone anchored outside all the buoys, but this was in face of the open sea onto a rocky lee shore. No thank you! Pete’s ideas for anchoring were dashed, and I know he’s taken that as a great disappointment. I did say that at home, in the unpredictable presence of an advancing low, we wouldn’t anchor, so I saw it as nothing to lose sleep over.

We decided to head into Concarneau, which Pete warned could be really busy. It was 17:30 by the time we were pulling into the harbour entrance. It is deeply impressive, a huge walled city frames the harbour. Not that I had much time to admire it, preparing the boat for a mooring. We were greeted by a guy on the breakwater who told us to moor alongside! Port side to! Bonus! Not rafting! In a space where no one can raft as they’ll block the channel! All good. His English was excellent, so we had an amusing banter as he decided whether to move us. “We’ve had a long day”, I said… ”OK, stay there!” he replied. Further inside the breakwater was the Dutch boat! Our friends on their way north! Only, there had been a change of crew, with the son and his mum having headed home. All very confusing! “Modern living!”, was how Rob (finally introduced) described it. 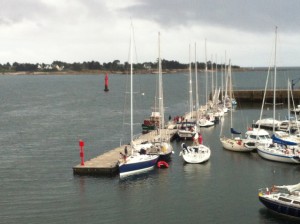 And so, we’re on the breakwater, all snug. We are expecting a bit more wind overnight, so that’s probably better than an anchorage anyway. It had felt like a very long day on the water (4.4 knot average is very poor), so it was very nice to have a walk on shore at the end of the day. Concarneau was heaving! It felt very odd to be among so many people, meandering through the Le Close Vielle (old walled citadel), like us. Mind you, we were looking slightly dishevelled, having been tossed around a bit on the sea. We stood on the ramparts and looked back over the marina, to see someone mooring in front of us. We watched the Irish guys helping to pull her alongside, powerless to do anything from our vantage point. When we got back to Whinchat, all was good, and they appear to have secured double springs, with decent mooring warps. All good. Pete was shattered, we both were. It had been a day when plans hadn’t worked, but that’s sailing for you. In a funny way, a reminder that Mother Nature is in charge, unless you have a powerboat, of course.