In keeping with the practice to not move on a weekend, we have stayed in Port Louis.  A few boat chores, but also there is a Saturday market, and the Citadel still to explore…. And we both love a castle!The market was one of the best that we’d experienced – and would give Stroud market a run for its money!  We have provisioned for a few days, with delights such as – a selection of olives; fresh salads; tomatoes; a bundle of green beans; hand carved ham; a selection of gooey cheeses and my new fav, a ‘comte’ (a relative in the Gruyere family); fresh cod and nine bottles of wine!  Wine tasting I’ve never before seen in Stroud!  The market cleaned us both out of cash…. But we will live well over the next days… particularly as the rain is coming back, so the day’s activities will centre more around the delights of food. 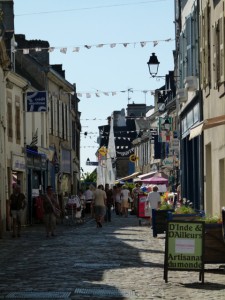 We had lunch in a small bistro overlooking the waters in the approach to Lorient.  We mused that it was a bit like the Solent, without the Fawley Oil Refinery, but instead of the Isle of Wight, there is the Ile Groix.  Ile Groix boasts lovely sandy beaches, which our own Isle of Wight doesn’t have – at least, one a gazillion boats can anchor off!

Our afternoon was spent in the Citadel, which was really excellent.  The fortifications are deeply impressive, and have remained intact for centuries.  The major renovations from 1616-1672 are evident today, and it’s just bogglingly fantastic.  There are walls within walls, and how it was saved from the onslaught of German bombing in WWII is amazing.  Or, perhaps we might respect the accuracy of the campaign – to destroy the massive military base, but spare a residential population.

Within the Citadel are three museums.  We visited all of them!  Museum overload?  Actually no.  They were all good, very well done.  The first we visited, the Museum to Sea Rescue, was the best (in my view).  The RNLI was the inspiration for the French equivalent, the SNSM, and explored its history and the history of rescue – including a very cheesy silent movie of rescue in the 1920s.  We watched a massive screen showing modern day rescue; seascapes that I hope never to experience! Interestingly, in the UK the RNLI is an independent charity, whereas SNSM is very much under the command of Government – and apparently, if you’re rescued you can be charged a fee….

The second museum was the National Maritime Museum, or a branch thereof, dedicated to the treasures of the oceans… all about marine archaeology.  We paid particular attention in view of Mary’s profession, tutting at times if Mary would approve or not (not of treasure hunters).  We were both enthralled by a film of a little pod excavating at 1000 metres.  It was called “JULES” (how very unlike me), and for a while we couldn’t decide if they were good guys, or bad, but we think they were as there was an immaculate archaeological record of the wreck.

The last museum was dedicated to the East India Company, which gave historical account of the company, the routes, the traded goods (including a very honest exhibit about slavery) and life on board.  On the whole, very well done, with some stunning individual exhibits.

We then walked around the ramparts, stopping to watch the boats coming into the waters leading up to Lorient.  What an enchanting place, and despite the reports of thousands of boats around (rather like the Solent), Lorient has much to offer… particularly to those interested in the sea.

Top place to come to.  The friendliest port we’ve visited.  Great market, great provisioning.  A lady who does laundry.  We’ve had a great couple of days here.  It’s now time to head back to sea and greet the coming days of cloud and rain.  It seems that summer doesn’t really last, even in France.