We have had a brilliant day today, perhaps our best shore leave day of our cruise, so far.  This is for several reasons.  Firstly, the washing machine in the marina is broken, but a lady offers a washing service in town.  I carried up the 4kg of washing (miles!) and managed to communicate with the lady in French that I might be back later to collect it, but we were going to Lorient, and it might be Saturday morning.  Fueled with confidence, I then queued in the Post Office to buy stamps – including one for a card to go to Alice, which I didn’t have… More spluttering French, but I was understood.  It is very satisfying. Pete had selected Port Louis as our preferred marina choice, because the guide book tells us that it’s quieter, and Port Louis is an old town (it has an impressive Citadel).  Lorient was raised to the ground at the end of WWII (except the submarine pens), and so has little of its own charm.  In many ways, it’s like Warsaw in its rebuilding, except with the same Communist influence on architecture!  We took the passenger ferry to the ‘heart’ of Lorient, a marina where we could have stayed.  Thank goodness we didn’t!  We have arrived for the end of the “Celtic Festival”, which celebrates all things Celtic, with a lively programme of entertainment which runs into the small hours every night.  It would be like mooring in the middle of a watery WOMAD – or some such like.  Guinness seem to be doing a roaring trade, with many beer tents around the place.  This was confirmation that Pete had made the right choice in location, and reason two for it being a good day.

The third reason was that we visited the Cite de la Voile, City of Sailing, which Pete had read about, and was very keen to visit.  Eric Tabarly, a very successful French sailor (of the mad racing kind), and complete National hero, is celebrated here. The Cite de la Voile is an outstanding museum, with exciting exhibitions, great use of multi media, and few people.  The first exhibition was about the Volvo Ocean Race 2011/12, which explored the preparation behind a yacht that enters the race.  Of course, being in France, we saw the view from “Grouprama”, the boat which eventually won.  It was jaw-droppingly good.  A fascinating insight into the people, the preparation, the racing.  Oh my goodness.  Anyone doing it must be slightly mad – as testified in interviews of some of the teams.  They said that you had to be a bit mad!  It is extreme sailing, and something that I never hope to do, but I have a greater respect for those that choose it having seen this exhibition.  The boats are super structures for racing, and the sailing team put their bodies through so much.  There are some YouTube clips of the boats in the Southern Ocean (not for my mother)! The amount of ocean that goes through the boats is startling, and these guys just stand there and seem to absorb it.  On this particular leg, only one of the six boats was undamaged.  It is a race I’ve heard about, but never really followed.  Next time it comes around, I shall be watching it.  These days, there is a dedicated media-man on each boat, in order to make it more accessible, so it makes it easier.  We both came away wanting to learn more about it – and that’s a great success in any exhibition, surely?

The permanent exhibition was all about sailing!  Different aspects, and again, the use of multi media was excellent.  The first part was about man and the Ocean, and you walked through a darkened ‘room’ with a dozen screens suspended in the air, which you walked between.  All they showed was the rolling sea, accompanied by a powerful acoustic of the pounding waves! It almost gave me sea legs!  Incredible. I was pleased that I managed to find displays about weather!  Pete competed in a winching competition (and won), and also a navigation game.  We could have spent longer in there, but it was time for lunch! 😉

We ate in a bar overlooking the water, and had a super lunch, discovering that it had a really efficient free wifi.  Result!  Especially as I’d picked up an email with pre-sale for Keane, for which I was successful in getting tickets!  So excited!  Another strike for the day.

Having developed an appreciation for the importance of Lorient in the racing world of sailing, particularly for building fast, really fast, boats, we then wandered down to look at the trimarans moored up.  So impressive!  More superlatives!  More of my own resolve that I wouldn’t like to go on one!  The Banque Populare boat was enormous, and we wondered what it had been built for, and how fast it might go.  The photo below shows Pete standing next to it, he is a mere blip by its starboard ‘leg’. 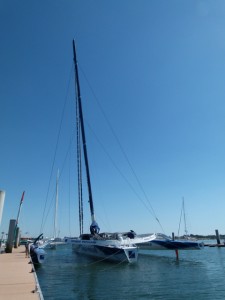 Pete has since done some research, which has only sealed my respect for it, and desire never to sail it!   It is 40 metres long, and 25 metres wide which makes it the world’s biggest racing trimaran.  It has several world records – all about speed – for sailing around the world (averaging over 26 knots), across the Atlantic (in just over three days), and round the UK (just over three days).  Whinchat crossing the Atlantic would take about three weeks.  Kinda ‘wooah’, n’est ce pas?

I’m happy to say that we missed out the Museum of Submarines (I did offer to go for another coffee if Pete really wanted to), and we caught a ferry back to Port Louis.

We ended our day having a beer, and musing about what we’d seen.  It has given great topic of conversation, which is always also a sign of having a great experience.

The only downside to end the day was that the one mossie in Port Louis found me, and I have been munched.  Dammit!