E F2-3 with a rolling swell from W, but pretty calm seas really

The wind had shifted overnight, and our anchor buoy looked like it was riding out into the distance.  So, Pete launched the dinghy and rowed out to recover it.  It was actually very happy, quietly reminding us where we’d set the anchor.  And why would you float a buoy?  Well, if you’re anchor gets fetched around something (which has happened to us in our pre-blog days), you have something else to try and tug the anchor up with.  The buoyed device would give us the main hassle in setting free.  I think it was absolutely my mistake, but I’d worried about the string on the anchor buoy snagging on our prop, because I was certain that we’d circled around the anchor overnight.  In order to avert the prop issue, I decided that I should capture the buoy with the boat hook, and recover the string on deck.  That all happened OK, but in having all this string on board, with some attached the head of the anchor, it all became a complete muddle.  I got the anchor up OK, but then couldn’t untangle this cats cradle of string that had wrapped itself around all sorts of gear.  I tugged, lifted, and gave up.  Pete had to sort it all, as I helmed us forward into the open sea.

Pete had had to lower the anchor to sort it, and we decided that hooking it had probably caused the issues.  Ah well.  You think you’re avoiding one problem, and you uncover a whole other set….

Our destination today was another anchorage on the south-west side of Belle Ile.  Armed with the ‘secret’ book, we had little confidence that we’d actually find something for ourselves.  The number of boats around has swelled since August has ticked around… The French really do seem to go on hols in August!

We had a couple of choices, the first, further away and the second was back near where we had started.  We were expecting light winds, and as the mileage wasn’t so great, Pete had earned a “pass” to sail at slow speeds.  And sail he was determined to do all day.

We hauled anchor, eventually, pretty early (long before 10:00!!), so were adrift before too long.  The wind was behind us, puffing a steady F2 (6-7 knots) and trying to make F3 every now and then.  Even when I was on the helm, I had no real idea of the speed we were going.  Actually, I was happy to have Pete helm so that I could look at the cliffs, the dots of the people walking them.  Unlike yesterday when we couldn’t see land for much of the day, today, we were within easy sight… It was making a lovely change.

We gybed our way along the island’s coastline, passing Plan B, which had one boat in.  We had reached Goulpher.  As we approached this small inlet, it was full of boats.  The picture in the book has them all neatly moored stern-to, like in the Greek Islands, but there was a hotch potch of boats.  I imagined the spaghetti of anchor chains under the water.  It didn’t even look that attractive.  We watched one boat roar ahead of us, take about the only space, and then haul up the anchor and attempt to relay it.  Not my idea of a good time.  Pete gave me the offer of veto, which I waved.  I don’t think that he was that impressed, but with a sigh, he turned Whinchat around.  We then had to travel five-six miles back the way we’d come.  Of course, this was a beat, but actually, it was a really nice sail.  The wind had decided to try for F3, which gave us some movement through the water.  We ended up in a racing fleet, which also was interesting to move through.  More active sailing than we’ve been used to in the last weeks!

By the time we’d got to Pouldron, there was more than one boat in.  Six, perhaps.  However, we edged in and found a clear space towards the back of the moored boats.  It is a delightful spot, really lovely.  We are behind a little island, off a rugged coastline.  There is nothing much that stands between here and the coast of the US, so there is thousands of years of pounding this coastline will have taken.  And, here we are, on a relatively benign night, able to sit amongst all this wonder and be rocked on the ocean floor.  That’s not entirely true, as there’s a swell coming in from the west, which isn’t always comfortable.  Whinchat has been lying across it, which just sets everything rolling, but over the last hour or two, she’s pointing more into the wind, which is like a rocking rather than a rolling.  Let’s hope that continues. 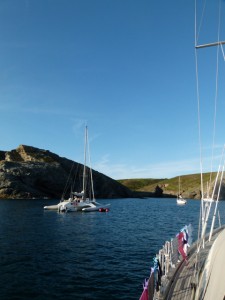 Pete cooked supper, which we ate on deck.  By then the motion had settled, so you needn’t worry about the wine glass trying to tack, and it was just lovely, listening to the sound of sea birds, the sound of the water caressing the rocky shore, the sight of the sun slipping out of the sky to the west.  It’s magical when things feel this comfortable. 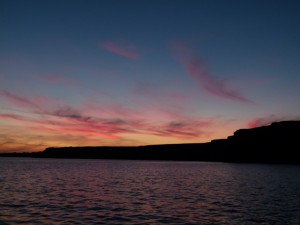 We have confidence that this will be a good place to stay overnight; we had talked about moving earlier when it was really rolling.  However, I’ve upped my weather skills.  Having learned some weather phrases when we arrived, today has been the first day when we haven’t been able to see a weather forecast, so I tuned into the VHF broadcast and translated it!  Really!  I had to record it on my iphone, and play it back a few times, but it’s true.  I can do weather in French!  Not much else I can seem to make anyone understand me in, except ordering rye bread, but I’m OK with that.

We are hoping for a peaceful night.  The sun has felt so hot today, and we have had little shade from it all day.  That, and the continuing fresh air, and odd glass of vino is a complete recipe for a good sleep.

(Update the following morning…. it was a stunning place to stay, with only 6-7 boats in.  A couple of boats came in to have a look, but exited.  The swell dropped, and it was a wonderful, still night at anchor.  As we cruised back on our way today, we passed one of the possibilities, which had 5-6 boats in when we passed on the way back to this place.  This morning it had around 40 boats.  How can that possibly be secret?!)