SW F2 with a rolling swell from NW, bleurgh at first!

At the risk of losing my two dearest followers – my mother and my mother-in-law – this is what the skipper described the day as… It wasn’t what I imagine a day at Ocean to be.  So, read on…. Despite the fact that the harbour was rammed, and that we were pinned somewhere in the middle, we managed to pick our way out from alongside the pontoon at around 09:30.  Some 15 minutes previously, it didn’t seem likely at all that we would be able to leave, but then, someone makes a move, which enables a couple more people to exit.  Thankfully, the wind had dropped from when we had arrived, so this made life a little easier.  Once the guy on our outside had cleared, Pete rather surprised me by calling me to my warps!  There were still three people rafted in front of us.

With a combination of a spring that Pete had rigged, which I was to hold, so that the stern came out, a friendly bloke in an “I love London” T-shirt hanging on to the bow, and the bow-thruster, meant that we eased out…. Backwards.  It was quite impressive.  We had all of about three minutes, however, before mooring alongside the fuel pontoon, bow side-to… So yours truly had to dash about the boat re-rigging from our starboard side-to overnight mooring.  I just about got two ropes rigged, and had to make a mad leap to the pontoon to get us alongside.  All good.  It was really remarkable that we were on our way before 10:00.

As we headed out in to the bay, there was very little wind – as had been forecast.  There was also quite a lively swell, which wasn’t a welcome sight.  The swell was coming from one way, and the wind another, so we knew that it was going to make for slow progress.  Our speed through the water was so disappointing at first – so I resolved not to look at it.

We opted for a watch system – the hour on; hour off – as we knew we had a long day in prospect.  I think that this was a good move, as it did provide a kind of rhythm for the day.  Nothing much happened during the day.  I was vaguely amused by the small fleet that left more or less together from Port Joinville.  A Dutch boat, a Swedish boat and us, all on AIS.  The Swedish boat gradually gained on us, and edged past us.  And then he unfurled his genoa and tried to sail, losing the ground that they had gained.  And so they slowly edged back on us.  Eventually he would try and sail, again, whilst we ploughed on with our 50 horses.  He was making 3.5knots according to AIS, which for me, wasn’t fast enough considering the 40 miles that we had to cover today.  He eventually gave up, but was on a slightly different course, and therefore the fleet had effectively disbanded.

This is what passage sailing must be like.  Great swathes of nothing very much, and moments of interest… and hopefully not too many moments of the horrors (we had none today).  In a strange way, there is a lovely rhythm about it.  The seascapes, or big cloudscapes, I find so enchanting.  But then, I’ve always been a sucker for a landscape that makes you feel small.  Never, in a million years, did I imagine that could be at sea…. 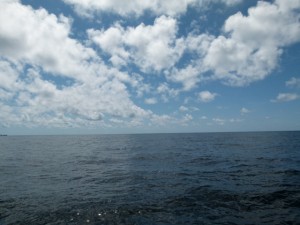 Pete saw a great spot of a Basking Shark!  Top marks of the trip for wildlife spotting, so far.  We came through a patch of very fishy smelling air, and I wondered if it was perhaps the burp of a whale?  This was unsubstantiated, but held as a possibility.

Our destination is one from the ‘secret anchorages of Brittany’.  Not that secret, as it turned out, as there were six or seven boats in there, and a few more to arrive after we’d anchored.   We arrived there at 17:30, after a long day on the water, and the beach was full of people.  It had been the first hot day in a while.

The spot was beautiful, but the swell had somehow followed us, and it was a bit rolly.  Nothing too horrendous, but a lolloping, and then every now and then a wolloper!  I managed to cook without incident, and we ate out on deck.  All very lovely.  However, we must’ve been hit by quite a sizeable lump of sea, as our cast iron griddle pan (for cooking steak), was flung from the hob, upturning it so that it’s greasy contents spread across the floor, creating a dent in the lovely wooden floor.  I also sustained a minor injury, when a knife got flung and bounced on the floor via my foot.

I slept in the saloon, after Pete had sealed up the mossie defences.  Partly the rolling nature of the boat, but also the air flow was lovely in the boat.  It actually wasn’t a bad night’s sleep, rather surprisingly.