The game plan for the day was to wake whenever and hire bikes to explore the island.  The marina is right next to an active fishing port – famed for its tuna – so the sound of grinding of mechanical equipment was the alarm call.  I wondered if it were a rouse to get the visiting yachtsmen/women out of their bunks and out of the marina.  Pete woke first, but I had been kept awake by the sound of the travellers partying along the quay.  The skies were leaden this morning, and we wondered if we would cycle at all.  We make no promises to be anything other than fair-weather cyclists!  Pete went up for the weather forecast, which showed that the rain would clear in the afternoon, so we did some boat chores – I toyed with the idea of doing some washing…not for very long 😉 – went to the market, and had lunch.  I had a real fancy for moules, and we found an excellent little place, ‘La Creperie Bleue’, on the quay.  Pete had a galette, pinching some of my frites before they became infected by my musselly fingers.  He’s allergic, you see.

The skies were becoming less ominous, so we decided that we’d risk the weather to embark on the Tour d’Ile d’Yeu.  A little known cycling competition, where the results are a certainty.  Pete with yellow, king of the mountains (although I held my own on the slopes) and me with the white (youngest rider, we’ll just forget the under 26 bit)… I think that was the result, although he did cheat on an uphill, when I was beating past him, to not tell me about a turn to take.  He got the stage, but foul play!

The competition is all imagined, btw, but despite my losses, we had a great afternoon on the bikes, and for once we didn’t get rained on.  The island isn’t very big, or very high (so the slopes are nothing; Milland Lane or even Wardley Lane in our village are much more serious!), so it was very satisfying when we cycled from one coast to another (all of 3km).  Our first stop was the very pretty village of Port de La Meule, in some ways a bit like Polperro.  It dries out at low tide, which is when we arrived there.  The coastline is rugged, very reminiscent of Cornwall, with a challenging entrance.  A lighthouse, or at least a light, marks the entrance.  Pete muttered that he wouldn’t like to try to navigate that one. 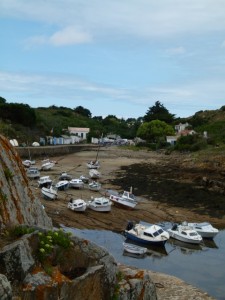 From here, we took a very dodgy (read, not tarmaced) path.  I’m no cyclist, really, and off-loading wouldn’t be my choice.  Especially in a three gear Dutch road bike.  However, we scrambled up and down stone paths to get to the most impressive castle, Le Vieux Chateau, carved into the cliffs.  It was a very dramatic setting, particularly with the grey clouds framing it (the photo looks rubbish, not doing it justice, so I haven’t included it).  Pete asked if I wanted to wait for the next guided tour…. Er?  Non merci!  I’m sure Pete was a smidge disappointed!  There was more to see.  Our final point on our course was the lighthouse, Le Grande Phare, which saw us back on the smooth surfaces of tarmac.  Lovely.  This is where Pete was a little cheeky.  Perhaps I could have called foul, like happened to Ben Ainslie in his Olympic Quest?  Anyway… 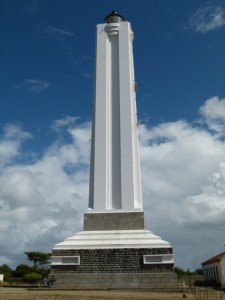 We took the tour of the lighthouse, which involved a climb of 196 steps to the top of the 56m structure.  We could both feel the burn!  The guide was in French, but I could follow some of it.  The guide himself used to live in Newark, so he answered some specific questions in English… with no hint of Trent in his accent! 😉 After the descent, we headed back to port, having thoroughly enjoyed our afternoon of pedal power.  It’s a great way to see the island.  The ‘main’ roads are like sleepy little B-roads (another reference to our village, but none of the speeding cars that roar through our lanes). In fact, until we saw an electric car this evening, we weren’t sure when the last new car was brought to the island. I’ve never seen so many ageing 2CVs, Renault 5s, Renault 9s (I think) and some rusty looking Citroens!  It makes Cuba’s cars look particularly modern…  Mind you, there’s not exactly many miles you can put on the clock, nor risk of salt damage from icy roads!  Most people on the move were cyclists, who certainly ruled the roads.

This evening, the marina is rammed full again – although we missed almost all of the action – and the inner harbour has boats rafted eight out.  Hopefully, we can extricate ourselves from our point, which is in the middle of the mayhem.  This morning by 10:30, it was easy enough to move around, so fingers crossed that it will be the case for us.  Our neighbours who are rafted against us, French with very good English, will also leave then, so they can hopefully do the negotiating on our behalf.  I guess we will just have to wait and see.