Today could be written about in so many ways.  We’d decided on a shore day, for me mainly, but has been a bit mixed.

Pete went for bread this morning so it was bacon and eggs for brekkie.  This was good.  Then we, and our Dutch friends, were approached by the Capitainerie guys and asked to move to a catway – no real choice in the matter as they want to stick a fat catamaran on the avant… So, we have moved.  We each helped each other, but the gap for Whinchat is 4.10m, and she’s 4.06m, so that’s 4cm spare… which doesn’t even cover a fender.  So, despite four of us trying to squeeze her in, with Pete on the helm, she’s a big scrape and a chunk out of her toe-rail… She needs a bit of TLC.  Pete was asked to report it to the Capitainerie, which has resulted in visits and calls to the boat next to us.  Any damage to him?  No, it’s a metal boat, which doesn’t look the most well maintained.  Fingers crossed there’s no ambulance chasing from the boat next door. 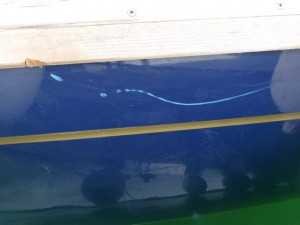 We then helped the Dutch guys move their boat, with the Captainerie boy on the boat alongside – with hindsight, he probably realised it’s what he should have done with us… Hey ho.  I shall miss being alongside them; a really lovely family, been cruising for the last few months, and are about to turn back to Holland.  Two weeks to get to St Malo is their aim, which is more than we want to achieve.  Let’s hope they do it safely, with good winds, and finding some lovely places along the way… and good free wifi for the son!

Speaking of wifi – great wifi today!  A paid for service, but I’ve been able to look at the BBC website for the Olympics for the first time.  Oh, what have we been missing?  I’m so envious of you caught up in it all.  I was there in Trafalgar Square in July 2005 when we found out we’d beaten Paris!  We were all jumping like mad, hugging total strangers, feeling so buoyant.  I imagine there’s more of the same feeling around.  I can almost taste it…

Anyway, I digress… Those incidents rather dulled the day, but we’d set about with the idea of walking to Noirmoutier, along the coast, some 12km.  We did walk to Noirmoutier.  We walked partly along the coast, the tide was out, so we were walking on lovely sand.  The skies were darkening from behind, and guess what?  We got absolutely drenched, in the heaviest shower which can have lasted all of 5-10 minutes.  Pete said we’d’ve been drier walking into the sea.  We debated whether to turn around or not.  We carried on, and ate our picnic on a bench, steaming slightly as the sun was trying to make amends.

Pete suggested that we head for the roads, as it would be quicker than the walk through the softened sand.  However, a wrong turn somewhere, and we ended up missing the scenic route.  Ah well.  So, was it successful, or not?  We reached Noirmoutier by foot, had our picnic on a lovely beach, found a wonderful deli in the town and bought some yummies….  So yes, it was.  Let’s overlook the facts that we got drenched, missed some of the way, ending up walking along the main road (not that main, all things considered).  We still walked about 12km, which is a good thing!  My legs were pretty weary, so I was in favour of getting the free bus back to the port – I think Pete would’ve walked – but it would have been the main road back (a mere 5km).  But having taken the bus, we’ve re-provisioned so that we can head out to another island tomorrow.

Just got to ease Whinchat out of the berth, but Pete’s confident that it will be a whole lot easier.  There’s a full moon tonight, so I’m going to go out on deck tonight and seek it out, and make a wish.