Another morning of deliberations!  What to do?  Oh the agony of decision making at times 😉  Pete ran through the possibilities.  Do we stay on the river?  Move towards the lock and move on, and then if we move on, do we go south or west?  In order to make the best of the tide, we needed to be at the lock for the 08:00 gate, so we’d missed that.  It was another river day!  We decided to try for a berth back at Roche Bernard and go for a posh lunch at the Auberge du Breton.

I was on the anchor winch, and I was pretty confident that it would come up caked in river mud, evidence of its excellent holding over night.  Bingo!  It was absolutely covered in thick, black mud.  It was a considered job for the super deck wash pump, but Pete had put Whinchat astern, creating eddies around the anchor trailing in the water.  I was trying to dunk the anchor up and down to get the mud off, and it worked a treat.  At least Whinchat wasn’t given a face pack!  I’m not sure she’s that kinda girl!

We travelled all of a couple of miles back to Roche Bernard, a very easy passage!  I hailed the Capitainerie boat and he let out a big ‘phsssstttttt’ when I asked for a berth.  He directed us to the long pontoon – no water, no electricity – which has a pully dinghy system to get ashore.  We went over to take a look, me changing the rigging for an alongside mooring, but there was no space.  There could have been, if boats had cosied up a bit, but no chance for Whinchat.  We headed back towards the new marina,  me re-rigging for a catway.  We were debating what to do, when a motor boat on the ‘avant’ (hammer head) was departing.  We were in!  Pete executed a brilliant mooring, using a technique of ferry-gliding.  Completely beyond my skill level to execute, let alone describe, but I think you allow the wind (in our case, but it could be the tide) to drift you sideways, parallel, to the pontoon.  With the bow rope in one hand, I leapt to the catway, and tried to secure the bow.  Not that easy because of the muppetry of the boat on the other side of the finger berth.  In tying his bow, he’d used his cleat and ‘ours’ to no apparent benefit.  I then had to dash back to take the stern, as Pete was holding us alongside with gentle nudges of the power.  The wind was blowing us back, and we had no forward spring to speak of.  He kept yelling that I was doing a brilliant job.  I then had to get back on board and unrig a warp to hold as a spring.  Unfortunately I chose the warp with the rubber springy thing (which stops jolting), but it can’t be cleated off, as the rubber section prevents it.  So I was holding the spring, as Pete retrieved another warp, without the rubber absorber, and tied the spring to stop us drifting back.  All good.  It’s a really great berth.  We were just in time to go for lunch.  This would be a real treat.  I even put makeup on! 😉

The Auberge du Breton used to be a two star Michelin restaurant, but ownership has changed.  However, it was clear that the new owners are seeking the same awards.  The lunch was delicious.  A mackerel pate on a curried biscuit as we pondered the menu.  An amuse bouche of the lightest cauliflower mousse, topped with a drizzle of basil oil, and some delicious crispy salt.  We both had the carpaccio to start – a heavenly arrangement of salmon, apple with a hint of saffron.  Gorgeous! 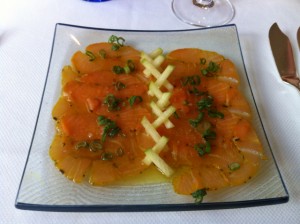 Pete had stuffed duck for his main, and I had cod with a tapenade and succulent ratatouille.  Yum!  Desert was something else, a mille feuille of chocolate, cream and a delicate serving of mandarin. 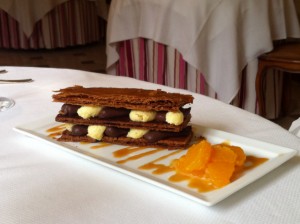 All of this washed down with a light rose wine, and finished off with a large coffee!  It was our posh lunch.  The equivalent of the first lunch in Dublin (although we were swaying at the table then, after the crossing).  Every trip should have a lovely lunch!

We took advantage of the shops and provisioned in the afternoon, before retiring to Whinchat.  Despite the large expresso, I managed a siesta – but only after finishing my book.  Another enchanting tale by the Nigerian writer, Chimamanda Ngozi Adichie, Purple Hibiscus.  It is a story in the eyes of a 15 year old girl, of her awakening.  Oppression, religion, family, violence, relationships… of her finding her voice.  It is beautifully written.  Half a Yellow Sun, by the same author, is also brilliant (about the Biafra conflict).  When a book is so good, it’s difficult to know where to go next (but it’s certainly not to brain rotting of Angry Birds… Pete will explain)!

Pete really wanted to go for a walk, so I said I’d join him. I really was in two minds, as it had started drizzling, but knew that it would be good for me.  We did a 6km circuit, over two bridges.  A really lovely walk, but at about the furthest point, the heavens opened.  The cold front was upon us, delivering the most spectacular rain.  We sheltered under some trees for a while, but this didn’t give much cover.  We trudged on… By the time we’d got back to Whinchat, the worst had passed (for now), and I was dripping wet.  I was pretty certain that my Rustler jacket had reached saturation.  My cap was sodden, and my trousers were totally soaked.  So much so that a rising tide of wet had ridden to my T-shirt.  Even my faux-leather bag gave up against the wet.  My walking boots leaked, so my feet were sopping wet.  I’m not sure that I could have been much more wet.  Despite all of this, it was a good walk, and one that both Pete and I needed to do after such a lunch.

On coming back to Whinchat, a Dutch Halberg-Rassey has rafted against us.  We’d seen them from the road bridge, and were slightly anxious.  We needn’t have been.  Exemplary!  All good.

And so as we head to the end of another day, the clouds may have cleared for now, but the rains will come back and thicken up.  The forecast for the morning isn’t great, so I imagine that we’ll rest here… our clothes will have dried by the morning (and perhaps my hair will too), so it’ll be time to give them another soaking.  Until then, goodnight.