NE F2, with very slight seas, and dead calm in the river.

After the grisly weather of yesterday, the skies cleared into the evening and I was confident that we’d seen the back of the changeable weather.  How wrong was I!  The synoptic chart at the Capitainerie was a complete lie! We woke to the sound of rain pouring down on the coach roof.  This wasn’t in the plan!Despite the rain lashing down, I went up to the boulangerie for our morning bread, with both mobile phones on me to allow a couple of emails to be transported as I passed the sweet spot of the free wifi.  With the rain, it was like being transported back to Mylor!  Pete was in full clothing – by that I mean, long trousers, socks, and a jumper!  He said he’d even contemplated putting the heating on.  It was cold, and not inviting for a day on the water.

Over breakfast, we talked ourselves out of being complete wimps for poor weather, but reminded ourselves that this is fun.  Why move if you don’t have to?  It wasn’t as if we were missing out on great winds; it had all gone a bit ‘puffy’ on that front.

We had some provisioning to try and do, and we couldn’t leave until there was enough water over the sill…  This would be about 12:30.  I said to Pete that there was no way that this rain would clear in that time…. How gloriously wrong was I?

By the time we’d mooched back from the market, the rain was easing.  Pete said that he’d fill the water tanks.  I curled up in the saloon under a fleecy blanket with my book… not really expecting to go anywhere.  The skies were clearing, and Pete shouted down that it was actually beginning to feel warm.  From terrible visibility, the shroud of rain had cleared, and the skies were peeling back to reveal increasing patches of blue.  What a transformation – and contrary to my proclamation it had all changed by about noon.  I couldn’t make sense of it (the synoptics, I’ll blame that).  It was clearly ripe warm front weather, but that wasn’t what the meteo had shown.  (Later, I’d see another synoptic, which would prove me absolutely right, a warm front.  Had I had confidence in it, I knew it would pass sometime soon).

We decided that we’d head off, so prepared Whinchat for departure.  It wasn’t our finest exit from a berth, but no damage done, so at one level, all OK.  Pete wasn’t happy about it.  The wind was behind us, not blowing that hard, but we hadn’t cleared the bow enough (I thought we had, I was the one who called it), and then I had to get him to reverse, and turn hard to starboard.  I looked back to see the fenders doing their job of keeping us off the end of the catway…. Pete was cross, because if a boat had been there, we’d’ve been in deep do-do…  Anyway.  We live and learn.

We knew the distance wasn’t that great to the Vilaine, which was perfect for a lunchtime departure.  We also aren’t expecting too much wind over the next couple of days, which also makes it perfect for a mooch up a river.

The entrance to the Vilaine is shallow, with a rocky patch to avoid (from our direction, the south) on the port side.  No worries, leading lines would take us there, on a course of 023.  We thought we had the white wall lined up with a church tower, but as we got closer, the white wall wasn’t a white wall, but a white sandy beach!  Much expletives!!!  What would we do?  Turn around?  Carry on?  We were above half-tide, so it wasn’t mission critical, so we carried on. Pete reckons we cruised right over the danger area, but neither of us could work out where the blessed leading line was supposed to be.

It was really wonderful easing up the river, once we’d had that little panic done with.  The sky seemed to be clearing more, the temperature was rising, and it felt so lovely to be able to watch as we chugged by.  We both gasped as a huge flock of white birds rose up on a sunny bank, their wings glowing in the light.  Shame it was only gulls when I spied them through the binoculars, but you can’t have it all ways.

The next level of drama would be the lock at Arzal.  Let the chaos ensue!  We were all under the control of a very jolly lockkeeper, who spluttered equal amounts of incomprehensible French and English.  He wielded a boat hook, and paced up and down.  We were to go alongside on the port wall… we were rigged for anything (of course)… and he helped Pete get a stern line on, but I had the task of trying to hook the chains for the bow.  It took several attempts with our slightly shallow boat hook.  When I eventually got it, I had a round of applause from the boat ahead.  I was mortified!  We can do locks, we’d done the Crinan, but I hadn’t reckoned on moving up when the road bridge opened… Meaning we had to go through the whole shenanigans again!  I was really wishing that Tim was there!  Our canal expert.  He’d made me feel a whole lot less stressy.  Pete has this ice-cool look in such circumstances, as I seem to rush up and down, moving fenders, adjusting lines, looking very harassed. When you seen what they cram in, you might appreciate my rising cortisol! 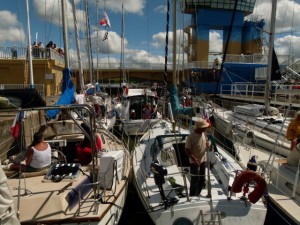 A motor boat rafted against us, with the guy at the helm the only one with any apparent boating skills.  They nearly took the corner out of Whinchat’s stern, and then had the bow rigged all wrong with next to useless fenders.  I had to go back and relay ours, so that we didn’t chafe.  All good in the end, but it was a moment!

Pete was surprised that we were going down – I think he thought we were on a rising tide, but whatever!  After an hour of chaos, we emerged the other side, back in the easy calm of the river.  Annnnnd breathe!

We glided up the river for 45 minutes, until we reached our destination.  The much heralded sweet place of Roche Bernard.  We seem to have been one of the last boats met by the Capitainerie, whom I sprouted my limited boat French at.  Funny how I always get that job?  Anyway, for trying, we were awarded a hammerhead (yay!) for which the guys moved off a smaller boat.  Result.  The marina is often full, so we feel very lucky.  It was a good mooring, although the angle of approach was steep, as the hammerhead is shared with a wide catamaran.  Knowing how bouncy the catways are, I’m always reluctant to jump, but I felt Pete had got as close as he could, and there was a boat on the other side.  I leapt, pointing forwards, so that I could grab the moored boat, and reduce the risk of being bounced into the water.  Midship tied, it was a case of sweating in the bow, and then the stern.  All good.  All secure, in the most beautiful of locations.

We wandered into the small town, which has rocky outcrops, just getting a feel for the place.  I found a little jewellers, which I’d had half an eye out for over the last places.  I can’t remember where it was, but I watched a silver hoop earring disappear down-water, so I chucked the other one in.  I now have a replacement, quick release, pair of hoops.  You don’t want danglies that could get stuck on something and rip your ear off!  I’ve a healing burn to be coping with (I’m not sure that made the blog, but I have singed my arm on the trusty Remoska, which I had a burn plaster on… Which came off this morning, much to the ‘eurgh’ cries of my skipper.  He resorted to the First Aid book, and our First Aid kits, so I have some monstrous plaster arrangement to prevent ropes taking off skin and the like.  He wanted to apply the burn bandage, which would have looked very dramatic.  I refused). 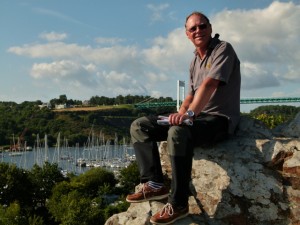 So, the day ends with us moored up somewhere behind the trees on the water behind Pete.  Very calm.  We had a beer overlooking the river, warming in the sunshine.  Just wonderful.  I am so glad that we made the effort to leave Piriac-sur-Mer, as much as I liked the place.  We have a couple of days in prospect on this river, which promises to be really laid back.  A holiday within a sailing adventure!