NNW F3-4, with moderate seas at first, then slight in the shelter of land.

I was surprised, at one level, when Pete complained about the very disturbed sleep, that we wouldn’t just get up and leave.  The kettle was on!  I knew that today’s passage needed a certain amount of precision in the timing, we had an alarm set after all, so I figured that the scheduled 08:00 departure was a critical one.  It was, more or less.  We had breakfast, in the continual motion of the sea, and prepared to leave.  I’d had enough, and knew that once we were under sail, the motion would be better. Whinchat slices through seas – at least like the ones that had disturbed us.

It’s the first time that we’ve hauled the mainsail on a mooring, which meant that we were under sail power within moments.  We had a cracking sail!  The wind was now our friend, right on the beam, as we ploughed towards the mainland.  I was a bit over-motioned at first, so Pete had the first helm.  The competition of the morning became who could sail the better – more accurate course – and I was the winner.  Not that easy when you’re being blinded by the sun!  I’m sure that particular competition will rear itself another day.

The change in weather meant that we were both cold out on the water.  Both of us were in shorts, foolish, but had a long sleeved sailing top on.  Pete resorted to a fleece, and I had the fleecy blanket wrapped around my legs!  Brits abroad, eh?!

By then, we’d handed over to Doris, as it was too cold out in the wind on the helm! The wind was being a bit fickle, but holding around 12 knots.  I was astonished when Pete muttered something about flying the cruising chute!  It merely faltered, and then came back.

There were loads of boats on the water, people taking advantage of near perfect winds.  Surprisingly, many boats seemed to have a reefed genoa.  It was about 12-15 knots of wind on average, but Pete’s explanation was that most of the power comes from the front sail, not the smaller main, and therefore they might be overpowered.  We had all sails up, and were tanking along at times.  Just wonderful – even better, if I’d’ve been bothered to put more layers on!

Our destination today was the small port of Piriac-sur-Mer, which the cruising guide rated highly.  We’re beginning to trust Neville Featherstone!  The port has a sill, therefore is accessible only around high water (hence the scheduled departure), but of more concern to the skipper was that the harbour entrance is riddled with rocks, and therefore he was also concerned about the amount of water above these hazards.

We’d arrived at the harbour entrance around high tide – a perfectly timed passage.  I think Pete was reluctant to drop the sails in some ways, as we hadn’t actually sailed very much in the last week, but I’m sure he was also keen to make the most of the water.

We made our way in, Pete closely holding to the leading lines.  I was busy rigging up Whinchat for arrival on our least favoured catways, the finger pontoons that only cover about 2/3 of Whinchat’s length.  A motorboat had roared past us in the channel, so the guy in the dory was dealing with him.  Pete selected a catway, and we approached.  Thankfully a bloke on the next boat came out to help.  Pete reckons that we would have been OK, but I’m always happy to take help.  The bloke took the bow line, whilst I tried to get the trusty midships working.  It didn’t really.  The fenders were leaping over the catway.  The bloke with the bow was just holding it, trying to hold Whinchat.  I tried to indicate to him to put it round the cleat, but he shook his head, pointing to the stern, which had curled around the end of the catway.  Once the fenders had lowered, he secured the bow, with me holding the mid.  Pete came off the boat, and then we busied around, tying, retying, relaying the fenders.  All good in the end, and we think we haven’t added to the collection of scrapes. 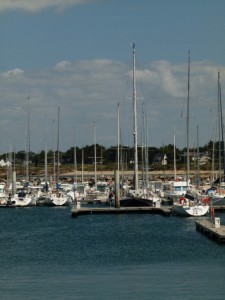 Aside:  we think we may have the strategy wrong for these uber-short pontoons!  The trusty midships is next to useless, and we think a securing the bow first is a better option.  Having just watched a mooring disaster, it’s given us something to learn from!  The wind was blowing about 25knots, as a French boat came to moor on the catway.  He didn’t make the turn, and got blown sideways onto the boats moored behind us…. Which caused a very old, bearded, salty sea dog to emerge from his lunch, wielding a boathook and shouting at them.  Pete and I went up to take their lines, and with me holding the bow line – with a turn around a cleat to hold the boat, and not hoping to hold it by my own strength – the skipper was able to manoeuvre and come alongside.  This is where we’ve been going wrong.  The bow secured gives much greater possible control on these short finger berths.  Anyway, I recognise the look of sheer relief on the crew, when someone comes to help, as evidenced on the face of the guy who’d chucked us the line.

First impressions, are that Piriac is such a quaint place.  It also seems to give out a free wifi, from somewhere we’re not sure about where!

We had dinner ashore, at a fabulous little bistrot, “Chez Grandmere”, after a drink in a little bar, where we saw 4.09 minutes of Olympics; swimming.  Phelps lost out.  It made me sad in someways that we won’t be able to follow the hype, the progress.  Mum has given us thoughts on the Opening Ceremony (which I must get highlights of), and news of the plight of Cav in the road race.  However, you can’t have everything, do everything, and this sailing trip is certainly worth the sacrifice of a few hours of TV.

One of yesterday’s tasks was to do the laundry.  A 16kg load, which seemed to take an eternity.  Not a very exciting job, but certainly one that needed doing.  Today, we wanted to take advantage of a supermarket nearby, a butcher, pharmacy etc, but also have a boat cleaning session.  We couldn’t leave under the sill was cleared of water, even if we’d wanted to set off in the morning.

As it was, I went up to the boulangerie for bread this morning, taking in the weather on the way.  Thundery showers!  Not ideal.   Over breakfast we decided that we’d stay in port today.  You have to catch up on chores every now and then, and even though there’s wind about, there’s also the prospect of rain.  It absolutely lashed it down first thing… it didn’t disturb my sleep, but I could see the evidence of it as a huge puddle had collected in the bimini.

We were going to have lunch ashore, but the thick dark clouds had rolled in, giving an almighty downpour… so we wimped out, and had a boat lunch, listening to the rain on the roof and the wind gusting all around us.  Had we not have lunched here, we wouldn’t have been able to help the French boat that got side swiped by the wind.

Pete’s had various charts, books, and tide plots out.  It’s sort of time to have the end in sight.  We’ve about a month left before we’d like to be home, and there are places to explore here, but we also need to make time to get up to Cherbourg, where we plan to cross back to the Hamble.  Pete is trying to work it all out, and is scribbling notes in his passage planning notebook.  No doubt some broad suggestions will come out of it.  I keep on making the point that we can always come back, but I’m not sure that’s my most helpful comment!