W F2 fading to a mere breath, with glassy seas.

It amazed me how easily the various boats peeled themselves out of the harbour, without much in the way of raised voice or crunching of gel coat.  The guy on our starboard side wanted to go much the same time as we did – which was more fortunate for him as he was pinned.  Of the five or six boats alongside, only three of us were tied to the mooring buoy behind us. There wasn’t much of a promise of wind, but a ripple on the water.  With the dinghy being towed behind us, Pete’s eye’s lit up.  We’ve been carrying on the coach roof, which means that the cruising chute is well and truly buried.  However, with access routes available, Pete quite coyly asked if he could fly the kite.  “Sure,” I replied.  I think much to his surprise.  Doris and I were left in charge whilst the pfaffing of the rigging began.  It must’ve been a good 20-30 minutes before Pete declared us ready to go.  I was given the responsibility of pulling on the sheet, as the kite took flight.  This heralded a round of applause from a yacht motoring past us.  I think I felt Pete swell with pride.  Even I have to concede, it is a beautiful sail.  Importantly, there was no prospect of having to gybe it, and there wasn’t enough wind to send us scuttling along, and there weren’t many boats around us in order to stress about.  Just about ideal conditions, if ever there was any. 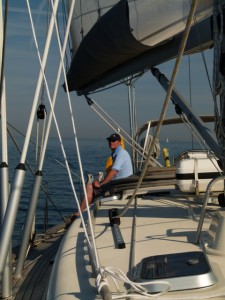 It was a baking hot day, and I was perched in a narrow patch of shade at the back of the boat, as Pete sat in the shadow of the mainsail, constantly twitching and adjusting the massive sail.  He was as happy as anything, with no real sense of how fast (or slow) we were actually going.  At about 8 knots of wind, we were pulling about 5.5knots… not bad.  But when the wind faltered to about 5 knots, we were making about 2knots.  Not great progress.  At one point I calculated that we would take another 8-9 hours to reach port… Despite what Pete may think, I really didn’t want to spoil his delight in the cruising chute.  The wind faded, and then came back, briefly, and despite all my appeals to the Goddess Athena (the wind Goddess, check out Homer’s Odyssey), the wind just faded and faded.  It was Pete that said we should put the engine on.  He kept the kite hoisted, just in case the wind came back, but it didn’t.  I think that Pete would say that it was a better day on the water, but for sure there’s been much less wind than we’d expected.

Our destination today is the Belle Ile, which is supposed to be enchanting.  There are two real options, the port of Palais or Sauzon.  Palais is supposed to be totally mental, in terms of boats flocking there.  There’s an inner harbour, where they ram so many boats in that – apparently – you can walk from one side of the inlet to the other.  Not really our style!  We’ve opted for the quieter Sauzon, which has a gentle charm.  Neither is far from the other, and we’d talked about hiring bikes or taking a bus to see Palais too.

We arrived about 14:30, the hottest part of the day, and were greeted by a cheery guy from the Capitainerie, who helped us moor onto a buoy in the outer harbour.  Pete had a vague idea to go into the inner harbour, but the harbour lad looked totally surprised.  We decided that it was too hot to do anything much for a couple of hours, so I planted myself in the shade of the boom with my book.  We were close to a couple of small boats rafter together on a buoy, with various young girls and a couple of lads moving between boats.  Out of the corner of my eye, I saw a bare bottom hanging over the edge of the wooden boat, and quickly realised it was a girl having a pee!  Not what you expect to see!

Just as I’d finished my book (When God was a Rabbit, very good, nicely written), Pete was becoming anxious about said boat’s long bowsprit, which was pointing dangerously close to our stern.  Pete wanted to move, and I could barely be bothered, but he made a valid point – if it hadn’t been so hot, I’d never be comfortable.  So, in a slick manoeuvre, with boats arriving all the time, we moved to a buoy tucked under the coast.  It’s certainly a prettier spot, and meant that we could look back and supervise everyone arriving in the harbour.  The heat has increased each day, and today the deck was baking hot, to the point that it’s painful to walk bare foot… just like the white-hot baked sands I recall in the Caribbean.

Just as we were preparing to go ashore and check out Sauzon from the land, a bloke was approaching in his dinghy.  It turned out to be Island Dancer, the Island Packet 44 who’d come to our call on the day of engine failure!  It was lovely to see him and thank him properly.  We did even better, as we saw him and his wife (David and Gail, would you believe!!!) in the port, so we shared a couple of beers.  Really pleasant. 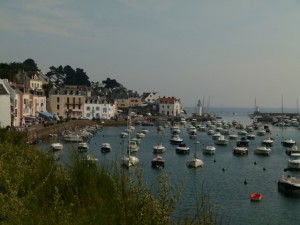 I liked Sauzon, more than Port Tudy.  Perhaps it had to do with less tourists (I know, the irony of that sentence), but the harbour is so pretty. I like that it changes every six hours or so, because the river dries out. You can see boats perched on the mud, with people foraging for shellfish.  A few hours later, the waters have returned, and it looks like any other port.  I think I could sit and watch the ebb and flow of the water for ages and ages.

We came back to Whinchat to eat – as usual – and enjoyed another evening dining out on deck.  The clouds increased as the day went on, as forecast.  It rained a little overnight; I thought it might actually bring some wind…. 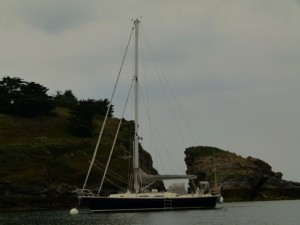 We decided that we’d take the bus to Le Palais.  Don’t worry, we’re not evidently missing out on any wind.  There may be weather around, but it’s not yet bringing any wind!  A no alarm morning saw us wake at 09:15!  I blame all the heat and sea air… So, no chance to get the 10:00 bus.  Not that it really mattered.  The 11:30 would do perfectly.

Le Palais is certainly very pretty, and very snug!  There wasn’t much air moving around, and the cloud made it feel slightly oppressive.  Le Palais is dominated by a vast Citadel, which we visited.  Vaubin did a very impressive job; it’s a remarkable construction.  The available explanations to anyone other than French meant that it lacked context and detail for me.  There was a terrible museum at the start, a collection of artefacts, with little information.  It was only when we were walking away that I realised that I had no idea about life, the social history, was not explored.  It was a case of a historical monument not coming to life. 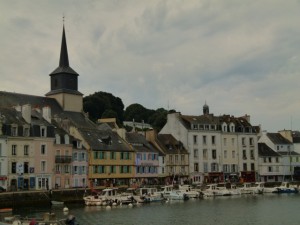 We ate lunch in a lovely little bistro in the port, moules frites for the second time! We meandered around, and then took the bus back.  We’d had an idea to do some laundry, but that’s a dinghy ride, you have to fetch someone to power up the machines (no tokens) and the machine didn’t look like it could take all we needed to do.  We’d got back to the boat about 17:00, and my heart wasn’t in it.  The excitement was that shortly after we arrived back, we were boarded by “Douane”, French Customs.  They wanted to check the ship’s papers – all in perfect order – and ask us if we had anything to declare…. Like 10,000 Euro in cash!!

They were very courteous and weren’t with us for very long. All good.  We have a stamped piece of paper to say that we were ‘controlled’, something to keep safely.

And did we venture to the washing?  Nope.  I hand washed some essentials, so we’re good for another day or so… but we really must make more effort!