E F3 fading to a mere breath, with ‘agiste’ seas easing to a glassy calm.

I had a bad nights sleep.  Nothing to do with the ‘vente solaire’ that made its first appearance.  If only they could arrive during the day, then we’d have a cracking sail.  No, I was awake for other reasons.  My fair, delicate English skin.  It’s gone all prickly, and add onto that a couple of mossie bites that have gone manky… Itch-central.  I was awake for a couple of hours, watching us not move against the stars above through the hatch of the fore-peak cabin.  I was longing for the solace of the cold sea to soak away the irritation, but no relief.  I got up and wandered around for a while, and then after crawling back into bed, found sleep.  Pete tells me that he slept badly too, disturbed by the wind, but his shift was different to mine.

The wind was still blowing when we surfaced, so we thought we’d better set to and make the most of it.  We had an hour of glorious sailing.  A gentle F3, just forward of the beam, meaning that Whinchat was coasting along.  The seas were rippled, but very calm, so there was no resistance from the sea; no swell at all.  Let’s face it, there hasn’t been any meteorological disturbance around to set it off.  In true ‘vente solaire’ style, the wind faded as soon as the land had any heat in it, simply killing the breeze.  It had been such a promising start, as I’d secretly hoped it was the ‘weather’ that had been forecast arriving early.  I hadn’t expected to sail on any of the last few days, so it was a bonus to me that we sailed at all.  It seemed to have the reverse effect on Pete, who wore a shroud of doom when the winds failed. I was on the helm when I called for the metal sail to be deployed – Tim will get this – but our speed through the water had dropped to nil, and SOG was 1.5 knots… giving 12 hours to the destination.  No thank you!

The book warns that Port Tudy is very popular, so we were half expecting to be turned away.  44 visitor berths were occupied, so we were guided to the mooring buoys in the outer harbour.  Neither of us could quite believe where we were being directed to.  Seemingly in a gap between two yachts, with no sign of the forward mooring buoy.  There was a boat on our port side, with a guy finishing his lunch.  “Comme ca?” I asked him, doubtless with an incredulous tone, “Bien sur,” he replied.  And so, we were half rafted, half moored in a gap.  Pete and I were both a bit bemused, but made safe as best we could.  And so began an afternoons amusement.  We wondered how many boats could be accommodated, and they just kept coming. It wasn’t long before we realised quite how naïve we’d been in some ways, we are packed in like sardines.  Pete reckons that there are some 50 boats on a series of mooring buoys, perhaps 15 in total across 3 rows.  It’s amazing how many are absorbed.  It’s very good natured, for the most part. 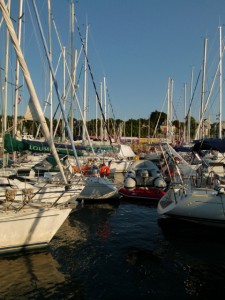 We seem to have ended up with  surly guy to our portside, whose approach is to set himself as free from his neighbours as possible. Let’s hope the wind doesn’t increase overnight, else we’re going to bump.  He keeps on fettling his lines, which are painfully thin.  We’d hardly consider them as fender ropes; not the job for holding a boat on a mooring buoy.  Like I said, we have to hope that the ‘vente solaire’ doesn’t decide to roll into the harbour this evening.

I’m not quite sure what caused our trusty guide to enthuse about this place.  It has a quaintness about it, but it’s not half as pretty as Ste Marine.  We walked up to the village on the hill in search of some provisioning – which was of the highest quality – but boy was it hot.  A sweltering 33 degrees according to the Pharmacy thermometer.  We certainly earned those beers (in the shade) when we walked back to the port.

Tomorrow we will move on, to another island.  After three days without wind, we’re wondering if this is the summer pattern?  The day time sea breezes haven’t kicked in, and suddenly this is feeling a bit unbalanced.  Of course, we have come to explore new places, but we’d rather hoped to have been sailing a bit more, particularly when you’ve half reserved the next heart attack for engine failure…..  Days harnessing the power of the wind are so much more interesting.  Let’s hope the winds come back out to play soon.