Another day of light winds and the most glassy of seas

There were many plans devised for the day.  The weatherfax weather was still hailing a E-F5, but I wasn’t convinced.  The meteo at the Marina showed nothing, what winds there were in the morning fading to nothing by evening.  This had certainly played out yesterday.  We’d talked about hiring bikes, exploring the area, but we weren’t sure that it was really an area to be explored.  We decided that we’d go in search of an anchorage.

We sated Whinchat’s fuel tanks with diesel, meeting a man in the process who was drooling over Whinchat.  “It is the boat I dream of, ” he said.  “I read all about them.”  I wonder if he’s found his way here?  If so, hello, and thank you for taking our bow line.

In view of the ‘no wind’ forecast, Pete didn’t even bother to pretend that he might sail. He’d set a destination, or a series of possibilities, which were in easy reach.  There would be a significant change in the look of Whinchat today.  For the first time, we’ve set up the bimini.  For the non-sailors, and those of us who mostly sail in British waters, this is a sunshade, directly over the helm.  We have used them extensively in the Med and the Caribbean, but Whinchat has never been given the opportunity for hers.  It was partly successful.  Great shade, but it meant that Pete couldn’t see!  He usually has to stand on the cockpit seat to see over the sprayhood, but with the bimini providing a ceiling, one of his first commands on leaving was “drop the sprayhood”.  I couldn’t see either, for that matter.  I’m usually of perfect height to see through the sprayhood, but since we’ve mounted the inflated dinghy on the foredeck, I can’t see over it.  Dropping the sprayhood was a necessity in the event of safe navigation – and we weren’t in danger of sea breaking over the bow! Despite the lack of wind, there were a surprising number of sailing boats out – around the Baie, but also dotted about on the horizon, some even seemingly attempting to sail!  Doris had a complete wobbly on the way out of the Baie.  She wouldn’t recognise the next waypoint, and was sounding her alarm with great affront.  Pete ended up having to go down below to reset the course, whilst I tried to see our way in the right direction.  Doris seemed to have been better for a partial reboot, but goodness only knows what had gotten into her.  Perhaps she was even a bit bored by the lack of wind…

Pete had set our course for an anchorage in Kercanic Bay.   We’re convinced we saw a boat run aground as we rounded the corner, but he seemed to free himself.  There are many rocks and shallows off this coast! We edged our way into the secret anchorage, and at the appointed moment, I dropped the anchor.  30 metres, and I could feel the chain rumbling.  Not a good sign.  Pete put Whinchat astern, and I could still feel the reverberations of the chain as our anchor was jostling along the sea bed looking for a place to nestle.  No joy.  We upped anchor and set about again, position slightly altered.  Down it went again…. With much the same story.  The anchor just wasn’t biting, so we upped and abandoned that location.

The next spot was just around the corner, off Raguenes  Why this might be any different, who knows, but it was the next place on the list. I was scouring the landscape through the binoculars , and all I could see were lobster pots!  Deep joy.  We were approaching at low tide, which revealed a lovely sandy bay.  Perfect for anchoring.

We picked a spot above a paler hue of blue, hopefully meaning a sandy bottom.  And so I deployed the anchor again.  This time none of the juddering and scraping along the sea bed.  The Rochna was doing its job and digging right in.  We haven’t moved in the hours we’ve been here.  That’s either because all is OK, or we’ve snarled some lobster pot along the sea bed.  Tomorrow will reveal all.

It’s been another first today.  The first swim of the trip.  We took the wimps option and went ashore.  We figured that the water might be marginally warmer over the sea encroaching over the warmed sands at low tide.  I think we were deluded.  It was “fresh”.  We squeaked our way into shallow water, up to our knees, slightly goaded by a French family.  I was the first to submerge, whilst Pete winced with every centimetre up his leg.  It was delicious….. You wouldn’t want to have bathed for long, but for the 15 minutes or so, it was lovely. Contrast the reflected heat off the concrete mass of the marina, and what’s not to love?  We strolled along the beach, feet in the breaking waves the whole way.  I’m not to mention that Pete dropped the kill cord for the dinghy’s outboard whilst putting his shirt back on, or that I was the one to walk back and find it, but no matter…. 😉 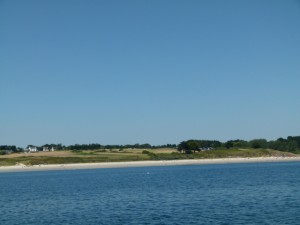 And so back on Whinchat.  I’ve reflected on, and written about, the last two days whilst sitting in the cockpit, gently being bobbed by the sea.  Nothing too serious to knock my glass of wine.  We’ve had a lovely supper aboard – created by me, in between musings, and now the sun is losing its heat.  It is slowly sinking in the West.  There is still the sound of children delighting in their play on the beach, and the sound of the sea meeting the beach.  You really couldn’t imagine a lovelier spot, at one level, and perhaps you might have got to the beach from your campsite, but you wouldn’t have this wonderful sea breeze, the sound of the sea and the knowledge that when the sun eventually fades on this day, there is no one else around you. 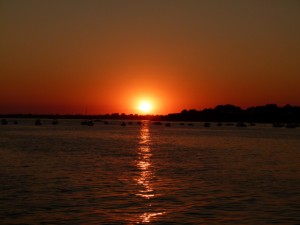