A mere breath of wind and the most glassy of seas

We took advantage of the excellent provisioning in the village of Ste Marine.  The boulangerie sold the most amazing array of bread and patisserie – Pete had walked up there before breakfast the day before, and we knew we wanted to pay them a visit before we left.  They bake a ‘siegle’, a rye bread, which is my perfect loaf.  The loaf has been baked to its limits – any more then it would be burned – but it was crusty, hard and caused echoing crunchiness when I sank my teeth into it.  The interior was so moist, by contrast, the smokiness of the crust permeating the dough.  Heavenly.  Unlike most French bread, it had a life beyond the same day.  There’s also a wonderful deli, close to the port, so we were able to stock up for a couple of nights planned at anchor.

We took the passenger ferry across the river to Benodet, partly because it was supposed to be enchanting, partly because we needed more sunscreen (the ‘oops, sunscreen overboard incident’), and mostly because the tide was racing out of the Odet, and we wanted to wait for slack water.  Was it enchanting?  I’m more taken with the quaint prettiness of Ste Marine, and the views across the river were lovely.  We visited a lively Monday market, but having stocked up, we didn’t need much… and there wasn’t a decent broad bean to be found!

Our idea had been to seek out a little anchorage, but the now-working weatherfax (for the first time since we’ve launched, thanks to Rustler and no thanks to Furuno), gave a surprising weather forecast… for E or NE F3-5.  Hmmmm…. Not exactly prime anchoring conditions, so we devised Plan B, C and D.  I think we landed on Plan C, which was a lovely sail to Port le Foret.

At about the turn of the tide, we cast our lines from Ste Marine and set off into the seas. The planned exit was smooth, although not entirely as Pete had planned.  I was surprised when I looked up to see that Whinchat had performed something like a pirouette. I asked Pete if that is what he’d planned.  “Not exactly” came the reply.  There was still some mischief in that turning tide!  No wonder the book says under no circumstances to arrive or depart on the ebb. 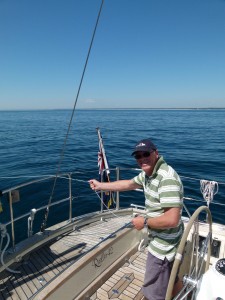 Of course the wind never pitched up, and as we only had a short day ahead, with lots of available light, we didn’t push ahead.  We thought the speed was low enough even for mackerel fishing (who knows if they gather in these waters), and when Pete finally killed the engine, and we were under a drifting sail, still nothing on the fishing line. 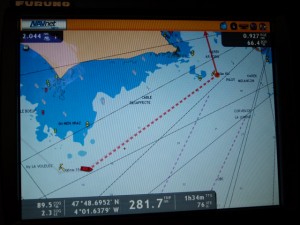 I’m usually the one to be tapping my toes when the speed drops, but it was Pete who fired up Whinchat’s engines when our SOG (speed over the ground) dropped to less than one knot.  He told me that it would take another 10 hours to get to Port Le Foret, so he had a fair point.

Port Le Foret is a functional place.  The bay that it sits in is lovely.  Concarneau is supposed to be amazing (but we’re saving that for the return).  It’s a bit like mooring in Port Hamble.  A vast, soulless place, but it gets you other places.  We were met by a young lad in a dory, who guided us to a berth.  All visitor berths are on the finger pontoons, which are almost useless to a boat the size of Whinchat.  After that mooring, I feel I’m entitled to my blog about French mooring-style, since we pretty much mimicked it… but it’ll have to wait.  The finger pontoon sits about half her length, and has so much bounce in it.  If I were to do my usual leap, then I’d be ricocheted into the water, so I was trying to glide off Whinchat.  Looking forwards, I hadn’t noticed that her stern had rather gently kissed the next boat.  Yep, the one the other side of the excuse for a pontoon.  In the UK, it would have been a perfect mooring, but instead of securing a line (no hope of getting the midships on) I was fending off her rather substantial rear.  Ah well.  There were people on the boat that we’d snuggled against, and they didn’t even stir.  I guess it’s expected.  If that had been in Port Hamble, or any UK marina, there would have been people appearing like meercats to watch the spectacle.  Pete then leapt off to secure the stern, not announcing himself, which caused a substantial wobble of the pontoon, nearly putting me in the water.  I’m not sure such arrangements really suit us!

The area behind is a concrete mass, although we had a couple of beers in a bar, welcome shade and welcomely cold beer.  There was a huge chandlers which caused Pete a frisson of excitement.  We ate on board, as that what we were planning.  Our first dinner outside in the cockpit, and only the second time we’ve ever used the table (first time with Gail, David and Jenson).  By then, the heat of the sun was dissipating, and we just had to pretend we weren’t in MDL-land…. 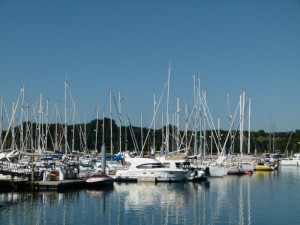