No wind! Glassy seas, with some swell.

If it is possible, there was less wind than yesterday.  When we fired up the instruments, it was reading 0.5knot!  Another motoring day in prospect.  🙁 There wasn’t enough wind in prospect even to drift, but this would be a day for a time-critical arrival.  We were heading for a small port on the River Odet, where the tide races up and down – so the trusty pilot book advises arriving at slack water.  That’s what the skipper was aiming for!

There were no tidal races to worry about today, although some of the navigation in the latter part of the journey was pretty exact.  Pete told me that chart datum showed that the channel goes down to 2.4m!  That’s about 60cm of clearance… In reality he thought it would be about 4m clearance – but in the end it wasn’t so bad.

There were a few boats on the water – it seemed like you could see forever.  There was very little in the way of swell to distort the sea.  By that I mean that when you’re in a trough of swell, and another boat is the same, then you can lose them.  There was none of that today, although the motion of the sea never stopped.  There was always swell, but it was a very languid motion.  Enough motion for me to lose the sunscreen over board! Duh!  Today has been the warmest that we’ve had, and we’ve been beneath blue skies all day.  Weather geek warning! That’s not quite true, as there were convection clouds along the shore, as evidenced in this fantastic cloudscape… 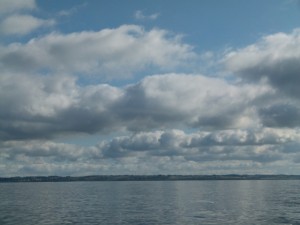 Anyway, small digression.  I was putting on sunscreen, using the roof of the spary hood to rest the bottle on between applications.  Next thing I see is it flying overboard as we get knocked by the swell.  I swore loudly, which brought Pete dashing up the companionway.  He suggested that we round to retrieve it, but you couldn’t have hooked it, the bucket’s too diesely to use, and there’s no way I was going in for it!  We will need to go to a pharmacy soon, as the reserves are low.

Our passage of five-and-a-half hours slipped by.  There were lots of boats around to wonder about where they were going, plenty of pot buoys to spot, and then the navigation required careful marking of the cardinals.  When the wind raised enough energy to blow about 12 knots, we unfurled the yankee – but it wasn’t enough to sail, but doubtless helped us coast along.

The entrance of the Odet is very well marked, with a brilliant leading line of two lighthouses!  The book says that you’ll be touted by dories from the competing marinas on either side of the river, but we already had decided on Ste Marine.  More sleepy, less touristy.  A young girl in a dory came to assist us, and surprisingly, the visitor’s pontoon had space alongside.  Our arrival had been at the start of the flood, so the was some tide, but not as much as is flowing now!! Boats are hurtling past at a rate of knots.  Apparently it can be good sport watching boats struggle against the fprce of the tide, however that viewing doesn’t seem to be available, as not many boats are showing up.  Time to escape the sun and head for the shade and a beer.