No wind!  Smoothish but swelly seas

The first alarm setting since we left Mylor!  Pete wanted to be casting off at 08:45 so that we could be sure to make the notorious tidal race of Raz de Seine.  I think if I’d read it before we set off, I wouldn’t have been too chuffed about tackling such perilous waters!

The book warns of many horrors, and the timing is crucial.  There is apparently a fifteen minute window where passage is recommended; that’ll be slack water.  The book offers a place to wait if you’re ahead – a bay, rather disturbingly called the “Bay of the Departed Souls”.  It counters of putting your washboards in incase you get slapped by a rogue wave on the stern.  It advises being clipped in, wearing of life jackets essential. Engine should be running, even if you’re sailing, as the winds can be very flukey.  You have the picture?

Pete was very nervous about it.  The added anxiety being that there was barely a breath of wind and Whinchat’s engines hadn’t really been tested.  It worked perfectly, throughout the five-and-a-half hours we demanded of her.  It didn’t miss a beat!

The passage was unremarkable in many ways, but it often is under motor.  As for the feared Raz de Seine, it was totally benign.  The seas were swelly, but the only suggestion of the hazards are in the massive lighthouse that is perched on top of a rock.  Pete remarked that building it would have been some challenge. 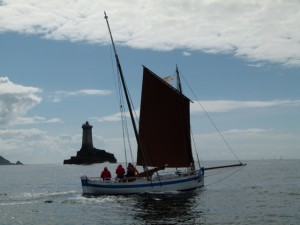 In Ste Evette we elected to anchor, as the book reports that the moorings can be very close together.  We had a perfect spot at the back of the mooring field, overlooking a beautiful beach with pretty buildings.  The anchor deployment was exemplary, and it bit first time.  To make up for the lesson on cardinals of the other day, Pete tried to identify some clouds as being indicative of a front approaching – he received a lesson in clouds, which I think he appreciated!! After lunching on board, I decided that it was high time that I scrubbed the teak.  I had been wanting to do it for months, but hadn’t found the opportunity.  There is a green algae that grows, I guess a bit like a moss, and one of the best things to remove it is sea water.  It’s been troubling me for months, but I wasn’t going to use Hamble River water, and neither any marina water that we’ve been in.  Today was the first time that we’ve been somewhere where the water has been suitably clean, and it has been warm enough to want to do it.  Pete rigged up the pressure hose (as the bucket contains diesely bits of engine from the emergency surgery Pete performed), on the proviso that I didn’t pressure wash the decks.  I devised a really effective method – wetting the decks (half holding the trigger to give a squeeze of water rather than a jet), then down on my hands and knees with a J-cloth, gently rubbing the teak, board-by-board, inch-by-inch.  The cloth then needed to be rinsed of its green gunk (full trigger blast) and then a half-trigger rinse off.  It took ages, but the decks look so much better.  If I’m being critical (which is my wont), then the technique became more honed as I continued, so the bits I did first could do with another going over.  Another day. I think!

As the day faded, other boats came to anchor around us, but everyone leaving the appropriate of distance.  One thing less of the skipper to worry about overnight! 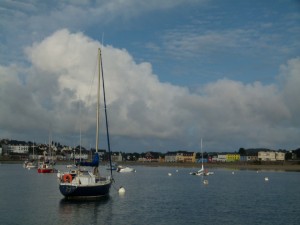