Pete said that we should be away around 10:00.  It seemed that the entire fleet in the marina had the same idea.  It was quite a sight to see the exodus – some with great ease, and some with great chaos.  Despite all of the advisory notices, there were six boats rafted against the fuel berth when I went to take our rubbish ashore.  Pete had a vague idea to refuel, but I think he soon went off the idea.  By the time I’d walked back, the rafting boats had floated off because a very large motor boat wanted to fuel.  I walked past just as he was mooring alongside, so I went to take his warps.  The guy on the bow was only too happy to have me take a line – the skipper didn’t seem to be so sure.  A woman?!  Not very often you see those trying to take command!  Anyway, having taken the bow and handed it back to him, taken the mid-ships, I nodded and walked on.  “Merci Madame” followed me along the breakwater – I suppose it’s too much to hope my “Mademoiselle” days are over! 😉When we left, we were astonished to see the number of sails around us.  There was indeed a whole fleet pouring out of Brest.  We knew that it was the Festival of the Sea (explaining the number of crusty looking gaff-riggers around), but WOW.  We were tacking out in to a plethora of sail.  Superlative after superlative could follow.  Pete was calling the tacks – my tactician – and I was on the helm.  We were ploughing through the ever-increasing fleet, with us reassuringly in the lead (at least to Pete).  I was about the only woman on the helm, in the brightest of bright pink polo shirts.  People were waving at us all the time.  Pete in his full foulie trousers, boots was sweating through each of the tacks we made.  It was just awesome.  Helicopters flitting around in the overhead – we knew we were in the midst of some sailing spectacular, but we had no idea what.  Amidst the small French yachts, the ribs charging up and down were the most amazing square-riggers.  Massive boats from the sailing past.  As we edged out, the sails kept on coming. We loomed towards a gap in the seastacks, something like the Needles.  It was something like I imagined the Round Island to be – and believe me, Pete was mentally racing everything around us! 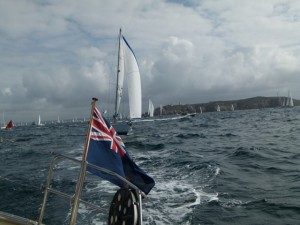 It wouldn’t be an exaggeration to estimate a thousand sails around us as we headed off on our course. Thank goodness they weren’t quite heading our way to our mooring.

We had a glorious sail, not particularly fast at times, but it was great to be sailing and not worrying so much about the engine.  We switched helming, although I managed to avoid most of the serious winching!  Result!

Today reminded me of some our bareboat chartering, hugging close to the land, sailing around a coastline – rather than in a straight line on passage – wondering at what you see, because it’s all new, and half-worrying about about the mooring ahead.  The sea was blue, the skies not so much.  Pete may have been in foulies, but I was in my summer sailing shoes, t-shirt and cropped trousers.  Such a different uniform from being in Scotland!

We left most of the fleet and headed towards Margat.  Either an anchor or a mooring buoy.  I am so out of practice at our mooring device, but a quick rehearsal and I was good to go.  Of course the wind was blowing by now, but I hooked it first time!  We were on.  Then followed a complicated series of rigging a rope (I was hanging off the bow by my knees to do it), laying the mooring strop…. Huff, puff… It seemed to take an age, but without a cross word exchanged, we’re secured.  This is a very beautiful place to be.  The most exquisite expanse of white sandy beach, shallow blue waters, relatively still.  Brightly coloured buildings frame the beach.  We dinghied ashore for a beer, and frankly, the view is better from the sea inwards.

A whole stream of boats have arrived in the hours since we did, and it’s remarkable to see how many boats have been absorbed into the marina.  Many must have been locals to see the fleet depart Brest, but there are many visitors too… no doubt rafted out several deep.  Thank goodness that the winds are set to fade; I shudder to think of the number of boats tied by a couple of fender ropes to the shore…..