W 4 then fading, seas bit swelly at first, then sheltered behind islands

The engine issues are documented on another post.  It has clouded the passage somewhat! We seemed to be plugging the wind all the time, every slight change in course brought more headwind.  We chose to motor because we’d set off so late, and because we were also plugging foul tide for a great deal of the way (or it seemed so).

This was one of the challenges of the trip, to negotiate the Chenel du Four.  It can be cruel at times, especially in any kind of weather.  Forturnately, we didn’t have weather to deal with, just a temporarily non-functioning engine and just about enough wind to sail.  This makes the point that it’s crucial to go with the tide.  Pete was so nervous about getting the tides right, and he did.  We were making any progress at all because the tide was with us.

He was utterly heroic in trying to coax Whinchat’s engine back into life.  I had my own heroics on the helm, steering the course between the channel markers.  I was desperately trying to pinch the wind, as the thought of tacking and sending Pete on a different level to sort the engine was not an option to me.  There is a red marker, just off a particularly rocky headland – Vieux Moines is the marker – and it wasn’t until we got there that I really appreciated the tidal flow, and the races that churned up the sea around there.  Pete chose that point to ask me to re-fire the engine.  “No way!” I replied, and he had to wait for yet another failed start.

When we eventually crept into Cameret, we were chasing the fading light.  Thank goodness sun sets shortly after 22:00!!  We chose to raft on the outer wall, just because there seemed to be a space.  Once again, I twirled around the boat, much to the amusement of a group of guys on a small yacht.  We rafted against a large, aluminium hulled boat.  I climbed on, secured our lines, and that was it.  Such a blessed relief to be in port.

On Wednesday, instead of moving on, we had an engine to sort out.  Although we did move Whinchat to the inside of the breakwater.  Pete announced that he wanted to execute this move within about five minutes me getting up!!  Before coffee.!  He reversed around the end of the wall, and we nestled back in.  The skipper of the boat that we rafted against came to help, and was a little bemused at me rigging lines (that’s the subject of a blog in itself, mooring French-style).

Pete exchanged messages with Craig from Rustler, who gave him some strategies to try.  The day passed with us peering into the engine, and Pete tightening this, checking this… It involved a trip to the Chandlers for something, and also a boat yard to get something else! 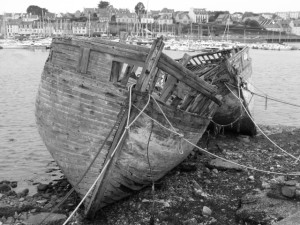 We ate on board, which provided good entertainment for the evening.  Not the food, but watching people arrive. Oh it is spectacular.  We couldn’t watch a poor, small British yacht try and rescue the mooring attempts of an even smaller French boat – which couldn’t hold itself in the wind. No….I’ll save that until my mooring special.