Oh, how much better is it to rise at 04:00 against 02:15 as a start to a day? The no wine ban was held the night before, but nothing was mentioned about a pint of Guinness! 😉  I think that the day’s fresh sea air had done a power of good, because as it came to have to go to bed around 21:00, I was happy to try and sleep…I had enough rest to tackle the day ahead.  At least six hours sleep.  I had my strategy all lined up.  I’d promised Pete that we could be up and good to go in 20 minutes (and that is a tall order, if you know my normal ambling state in the mornings).  I had promised Tim that I would eat – cereal bar did that, and I also chewed on a couple of Stugeron.  The forecast may have been for favourable winds, but the seas were also forecast to be moderate – 2 metre rollers every 10 seconds.

We slipped our mooring at 04:25, or five minutes later than I’d said to Pete that we could do it.  Not bad.  There was hardly a breath of wind, so we motored out a fair way.  We’d hauled the mainsail earlier than we had done on the first attempt.  This pleased me, for some small reason.  The sea was so benign; but I knew that it was the shelter from the lumpen mass of the Cornish shoreline.

I was determined not to rest until I was ready to, so I declined the first rest.  Pete hadn’t slept well and was tiring, so he was the first to settle into the cockpit bunk.  The place of rest was set on the port side, the down side, of Whinchat.  Cockpit cushion to lie on, with a pillow and fleecy blankets.  Pete must’ve crashed shortly before 06:00, because he woke with a start just after 06:00 saying he needed to do the log – only I’d braved going down below to mark our progress.  The wind had started fairly lightly, and around 06:00 I was debating whether to fly the yankee, as there was just enough to sail – around 12 knots.  Pete in waking, helped me set the sail, and then I covered him in a double blanket to continue his rest.  There wasn’t much going on, except an ever increasing roll in the sea.  I watched a rain shower approaching across the water, and dived down below to pull out all our foulies to cover him.  I couldn’t bear the thought of waking him to move him.  This layer of coats provided a sealing of warmth against the increasing wind, and certainly the rain.  He said that it was so snug…

At 08:00 I woke him, because it was a fair swap.  Pete’s shift, and my turn to recede into the nest.  We were still under power at this point, but the sound of the engine was not going to rouse me from my snoozing.  I woke to hear Pete retching, or something like it.  He’d chewed on a couple of Stugeron too.  It was very rolly, the full force of the Atlantic swell having kicked in… This meant one thing, that the wind was gathering force, and according to Pete, he killed the engine at 08:10.  I think this probably gave him something else to focus on.

And so was the pattern for the day.  I was all for encouraging the action of snoozing in the off-watch period.  The action in the downtime is as important as being on watch, and the difference makes you more ready for the other.  I do think Stugeron has a deliciously numbing effect, which makes the rest rather lovely.  At times you really do sleep, but often it’s a relaxation of the conscious state.  Pete will say that the boat was at the same motion as we’d tackled in the first attempt, but by mental strength, or chemically assisted, I was all good.

The on-watch times also flew by.  Really!  It was a gloriously sunny day for the most part, although the mainsail shrouded the sun until the afternoon, when it swung over to the west, so it was pretty chilly sitting at the wheel.  The motion of the boat was OK, it was smooth, although it wasn’t what I’d describe as gentle.  I had to brace myself at the helm (Doris was steering) in the cockpit by wedging one leg against the wheel housing, and having the running back stay sheet wrapped around my wrist.  Between the two forces I could keep relatively steady.  The seas did ease, but not until much later in the day.  The sea for most of the day was a rich blue.  It was really enchanting to watch.  This slow, fluid motion of lolloping water.  Every now and then there was a particularly large wave, which hid the horizon, but for the most part the swell was about 1.6 – 2.0 metres.  I pointed out to Pete that had it been overcast, or raining, the sea would have been a whole lot less more inviting.  I’d have willed the journey to be over in a matter of moments, whereas I wasn’t willing myself off Whinchat – don’t get me wrong, I haven’t turned into a seasoned passage sailor, I was looking forward to land, but I wasn’t hating the time at sea.  What a difference a few days make.

Our food pattern was interesting.  A cereal bar to begin with.  Pete made a cup of fruity tea early on.  Then it was a steady grazing on Pringles (hey, they’d got us through the Irish Sea), three or four every hour.  Pete made soup about noon – which was heavenly.  So lovely to have something warming inside, although he got walloped by a wave when he was bringing his soup up the companionway, so sloshed soup around.  Not the most pleasant of sights – it looked vaguely like a small child had thrown up.  No adverse effects!  I made a very crude ham sandwich an hour later.  That was it, really, for 15 hours at sea.

The presence of AIS makes on-watch a whole less stressful than it might be.  At one point there were about 14 ships on the screen, and you can scroll to look and see how close (or far) they’re expected to come within range.  The closest on my watch came about 0.7NM; they do move at quite a lick, and that would be close enough, thank you.  I also like seeing where the ships are taking their cargo to.  Colombia was quite a trek for a heavily laden container ship, and where in the world is Lome?  Watching the ships is also telling of the sea state – at times you’re looking at it, and then it disappears behind the swell of an incoming, or outgoing, wave.  A few seconds later it reappears, and on the motion goes.

We could spy land about 12 miles away; what a relief!  The wind had shifted, and because we were ahead of schedule, Pete needed to harden up into the wind.  So the last 6 miles or so must’ve been into the wind.  After all those miles from Cornwall, we nearly had to tack!

The entry to L’aber-wrac’h is riddled with big and small lumps of rock.  An enormous lighthouse looms large on the horizon, forewarning of the hazardous coastline.  Fortunately, the channel is well marked, and navigation is easy enough.  Pete took it upon himself to give me a lesson in cardinal markings – after a long day at sea, I wasn’t that appreciative of it!

The pilot book gives very little away about the harbour at L’aber-wrac’h.  We hadn’t expected to see a berthing guy in a rib.  I suddenly realised I didn’t know the French for ‘portside or starboardside to’!  No matter, he didn’t tell me anyway.  Just to “suivez moi”.  So we did, with no lines rigged, and a token fender on each side.  We were to raft alongside a big green boat, portside to.  We worked this out with about 20 metres to run, so I set about like a complete whirling dervish, whilst Pete held Whinchat.  Not enough fenders for the skipper, so I had to set another couple, and then we came alongside said green boat.  I was on the outside of the rails, thinking I’d try and lasso the centre-cleat.  Only I had to lasso it under the rails of the green boat; three attempts later, and I couldn’t do it.  In my attempts, I’d forgotten that I was the wrong side of our rails, and nearly lost my balance, toppling towards the water.  I threw myself back, and decided it would be more effective to clamber onto the green boat.  So, this is what I did, mooring warp in hand.  I was very happy to tie on the centre line, then I hastened forwards to the bow, to take the bow line that I’d trailed.  Now tied on in two places.  I could see Whinchat’s stern edging out, so then I rushed to the stern to take the stern line, which Pete was preparing to chuck.  Fortunately I caught it, and held it around the green boat’s stern cleat.  We weren’t exactly alongside, but we were attached.  Pete, very graciously, came on board to sweat in the stern, as I’d had five minutes of total mooring madness.

Fifteen hours, and two attempts later, we had arrived.  The skies were clear, it was warm and everything felt very good.   It was a case of the ‘we have arrived beer’ being very well deserved. 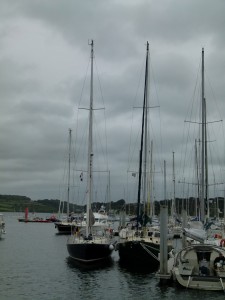