Having spent a couple of days with the Shears (and their car! Whoop!), and covered a fair number of miles in lovely walks, it was time to ‘commit sailing’ as Tim says.  I was really up for a trial of my sea legs, and I’d never sailed on Little Dove.  That was an easy one to solve, Tim invited us to join us on a day sail to the Helford.  Sally was really keen to go out, and we also needed to test Digby’s sea legs – he hadn’t been heeled over!Many of the moulding on the Rustler 44 is the same as the 42, so it is similar, but different!  Little Dove’s configuration is different.  No cutter rig, although there are two furling fore sails, what must be a massive genoa, and a self-tacking gib.  The mainsail is in-mast furling, which is rigged behind the wheel (ours is in the centre of the cockpit).  The ritual of raising the main is the same –and different.  Of course you have to point to wind, but an electric button does the work.  The self-tacking gib means that once it’s hauled, that’s it.  Very odd, at first, not to be on winch duty, but very pleasant. 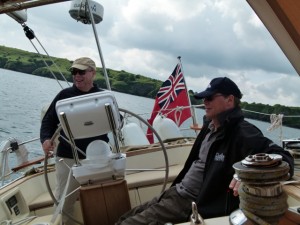 We had a lovely sail across Falmouth Bay, and at the time we went out (about 10ish?), there were few boats around.  It wasn’t much of a test of my sea legs, as the sea state was so benign, but it was a reasonable test for Digby.  He wasn’t able to work out how to secure himself, unless he was wedged around one of us… Mostly his ‘mum’, Sally.  The cushions meant he slid around, which he didn’t grumble about, but he didn’t seem that certain. 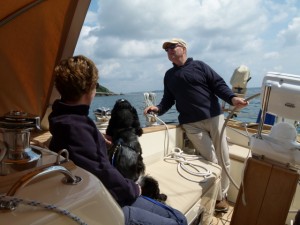 Tim tacked us up the Helford, rounding around to say ‘hello’ to a Rustler 42, Rowan Ruth, at anchor.  It was all getting a bit tight around the mooring buoys, so the sails were put away.  There’s a certain order to furl in the main, which is not as quick as getting our sails down.  Neither good or bad – it’s just different.  We came past another Rustler 42, Pantamullion II, (or something like that), and both Sally and I thought the name was a bit Pullman-esque, and the guys thought it was one that had been renamed – Tim has encyclopaedic knowledge of Rustler 42s!

Lunch was a lovely medley of fridge food on a mooring buoy.  Pete was the mooring monkey – a role he doesn’t usually get to do.  He did OK.

Tim wanted to sail off the mooring buoy, which he did brilliantly.  We drifted down the Helford for a while, with gathering black clouds chasing us.  Sally and I disappeared down below, me deploying my foulies.  What a contrast to the morning! The wind died off, so Tim decided we’d motor over to look at some potential anchorage sites…  I reckon he’s made a nice addition to the portfolio of places to overnight around Falmouth Bay.  The wind picked up a little, allowing us to take a course, into wind (of course) close to Pendennis Castle, and straight through a fleet of racing Falmouth Working Boats.  Our friend Glyn is part-owner of “Evelyn”; she recently won the World Championships, but she didn’t look that great in the St Mawes hosted race that we cut up!

Safely back in Mylor, it had be a very gentle sail, and perfect to get me in the mood for the prospect of the channel crossing on Sunday.  Anxious – a little – but feeling determined to make it work.