Day’s drift up the River Fal

In order to try and shake the blues of not being in France, Pete suggested that we take a gentle drift up the River Fal.  We hadn’t been up there since we’d taken Gail, David and Jenson.  We sailed up under the yankee as there was a fair bit of wind to begin with.  Of course we were short tacking to begin with, which was good practice for both of us, as without the mainsail, there’s nothing to help you through the wind once the yankee is flying.  We did really well, although it’s the hardest work we’ve done sailing for a while.  Another skill well practiced was gibing through the yankee – I’m sure I’ve been ‘yelled’ at before for allowing it to fly forward of the forestay – all good. 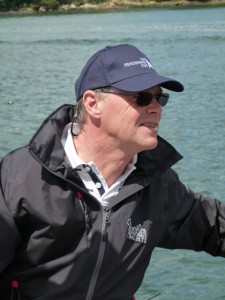 Pete was excited to spot another RAF Yacht Club yacht – and very cheerily cried out that it was Hamish!  Hamish saw us, and raised his mug of tea in salute to us… 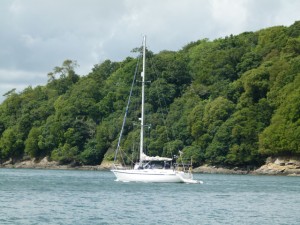 The wind became flukey as we meandered with the river, until it eventually ran out of puff.  Just about when we got to the King Harry ferry, causing Pete a certain frisson of stress!  We continued up as far as Malpass, and then turned back.  The water runs out, and we thought it was about time to find a spot to anchor for lunch.

This was the most ‘swallows and amazons’ trip we’ve done in a while, and it was a lovely tonic for the angst and disappointment of the day before.  We could really have done with being in a Rustler 24 rather than the 42, but hey… Whinchat served us very well.

By the time we’d got back to Mylor, the wind had whipped up, just as forecast, so we were mooring into wind (thankfully) at about 25 knots.  Tim, Sally and Digby had arrived, and with Tim watching us on AIS, he could see when we were approaching, so was there to take our lines.  What a welcome sight!

We spent the evening in company with our friends, which was just what we needed.  Tim metaphorically slapped me for not eating anything as we set off,  my cries of “but it was 2am” just earned a shrug!